How plural and how independent is the range of social groups, organised interests and communications media that seeks to influence the polity? How equal is their access to public institutions and how equally accessible are they themselves to individual citizens? 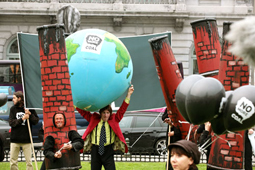 Political demonstrations are part of a vital civil society.

It is often observed that liberal democracy presupposes a delicate balance. On the one hand it requires that the political system should not be able to dominate the very society of individuals by which it is supposed to be controlled. Yet, that civil society must, in turn, be regulated by the political system so that no source of private power can interfere with procedures needed to secure public control with political equality.

These difficulties are especially acute in relation to the formation and exchange of political opinions amongst the people themselves. Even individual preference formation may be social in nature to the extent it best occurs through political discussion supported by a rich associational life, rather than as a prelude to those things. For its part, norm formation is inherently social and intersubjective. If, moreover, opinion formation is to be spontaneous it should not just be confined to the polity but should also occur through ‘adequate non-institutionalised forms of public communication anchored in voluntary associations of civic society and in liberal patterns of political culture’ (Habermas). Yet, as Habermas continues, it is precisely on account of its 'anarchic structure' that civil society is 'vulnerable to the repressive and exclusionary effects of unequally distributed social power'.