How far and how equally can citizens exercise public control through free and fair voting? 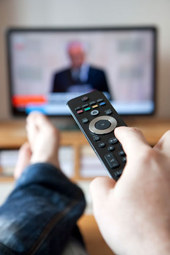 Equal access to media for political advertising contributes to free and fair elections.

First, variation across member states in thresholds – or the minimum number of votes any one party needs in order to win any seats at all – will affect the relative probability of small parties gaining representation in the EP.

Second, member states vary in whether they have open or closed lists or some compromise between the two. Closed lists give political parties complete control over the order in which their candidates are elected. Open lists allow voters to change the order in which candidates from different parties are elected. The difference between the two systems is likely to affect the behaviour of candidates in European elections, and the nature of representation in the European Parliament itself. Those who are elected on closed lists have more incentive to follow party policy and party disciplines. Those who are elected on open lists have more freedom – and more incentive – to appeal directly to voters in ways of their own choosing.

Third, the method of allocating seats affects the manner in which the last seat in each member state is allocated. This might sound rather technical, but it is actually of some importance. Several member states only receive a handful of seats in the EP. Thus there often has to be a large rounding up or rounding down of votes in deciding which party gets to receive last seat to be allocated. 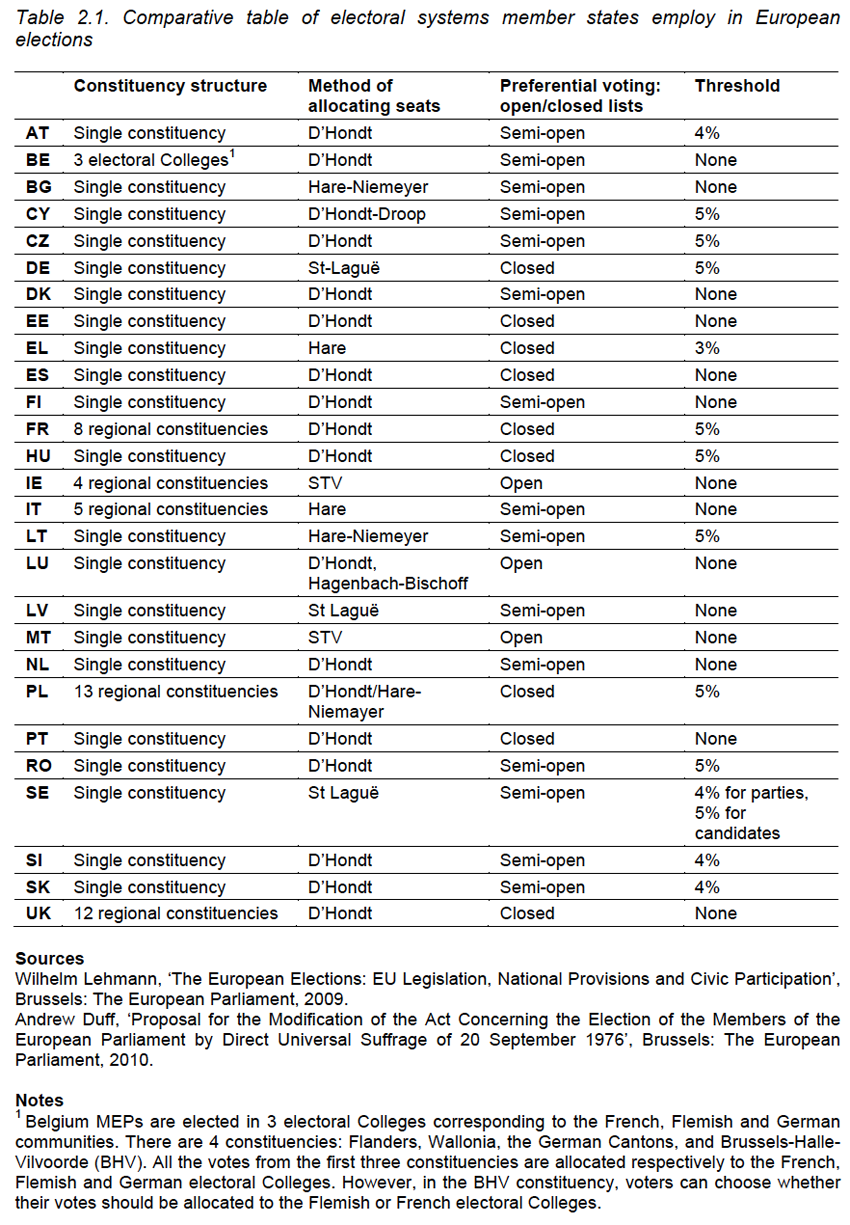 2.2 Use of open and closed lists in European elections

Given the importance of open versus closed lists Table 2.2. provides a simple summary of the percentage of MEPs elected to the 2004-9 Parliament under different arrangements.

Table 2.3. summarises the results of some comparative research conducted by Wilhelm Lehmann for a European Parliament study into the different rules for the financing of parties in member states. Arrangements appear to be rather patchy. Not many member states have rules that cover all of the three categories mentioned in the previous paragraph.

2.4 Regulation of the media and European elections

A further determinant of whether there is a level playing field in elections is access to the media. Table 2.4. provides a summary – again based on a study by Lehmann for the European Parliament – of national regulations governing media access during European elections. There is variation across member states both (a) in how far the media are obliged to allocate time to candidates and parties in European elections and (b) in provisions that are made for equality of access. 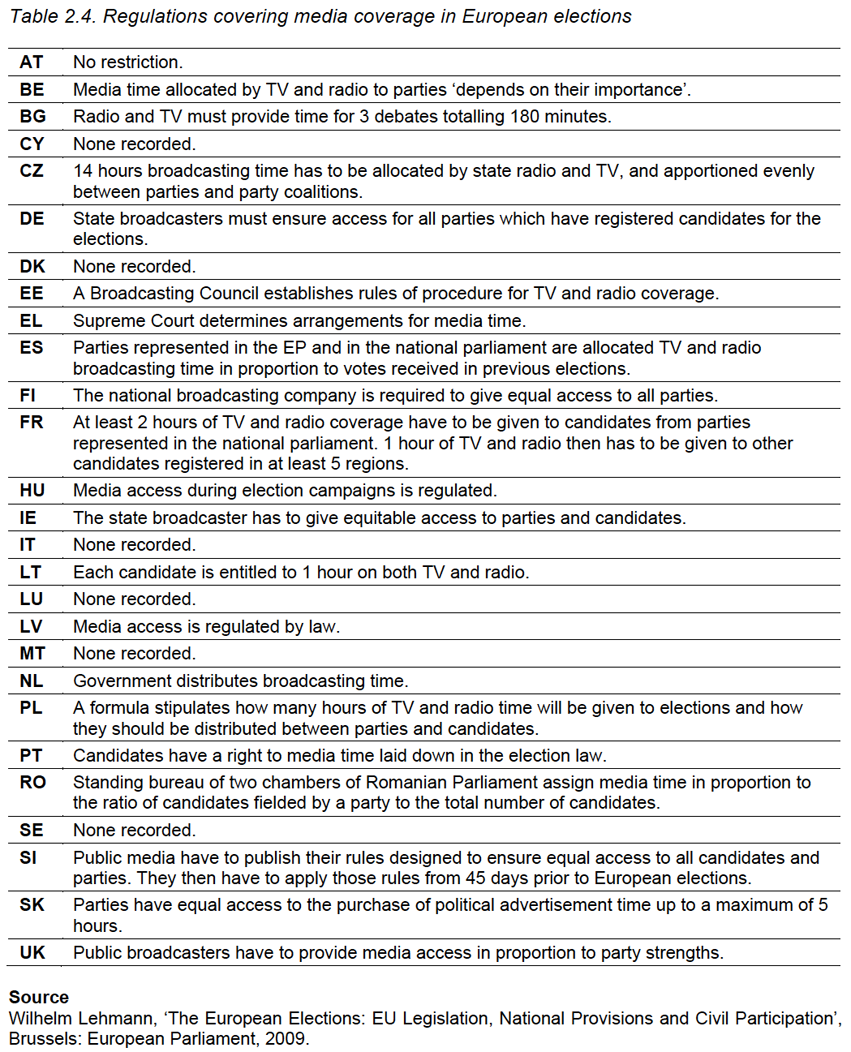 2.5 Length of time between national elections and European elections

European elections are often said to be second-order in nature. That is to say, that political parties largely contest them on domestic issues, and voters likewise use them to express their views on domestic matters. If this interpretation is correct, it means that European elections are not really about the institution that is in fact being elected: the European Parliament. 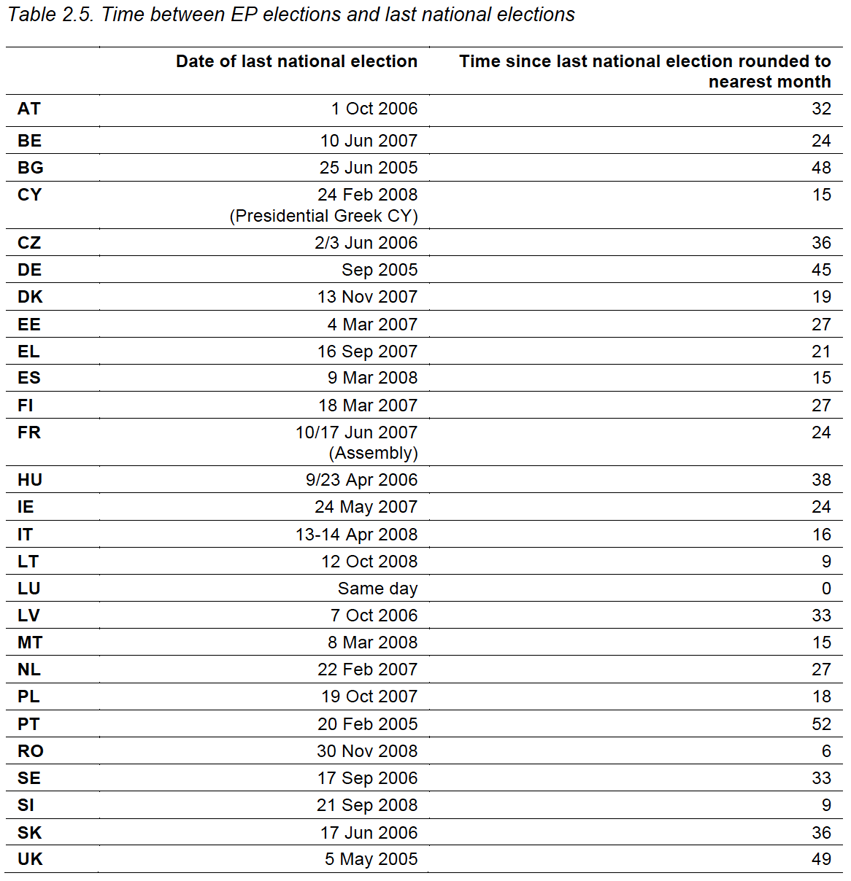 2.6 Other elections on the same day as European elections 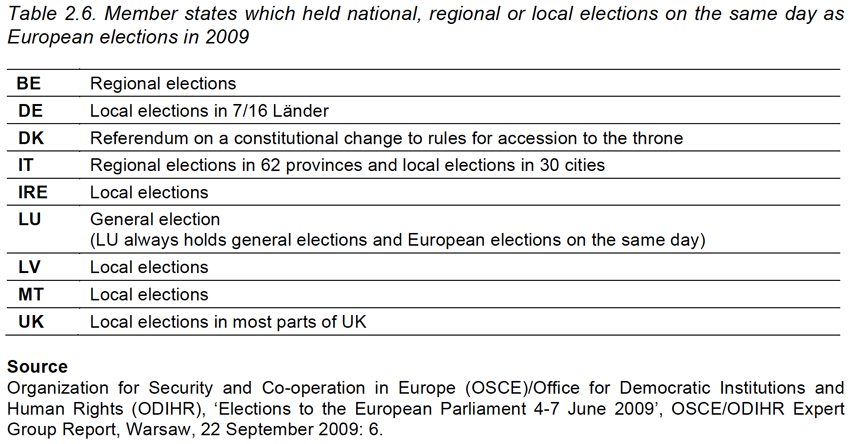 By Christopher Lord
E-mail this page