Indicator 10: Demos and the polity

How far is the polity accepted as a unit whose citizens can (themselves and through their representatives) make decisions that are morally and legally binding on one another? And how far can citizens acting as equals exercise public control over the design of the polity itself? 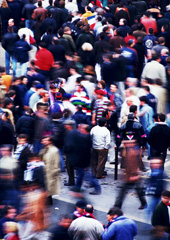 Demos and the polity is the tenth indicator of the EU democratic audit.

Few of us are likely to accept what we perceive to be rule ‘by someone else’s democracy’. Not only, though, does a democracy require citizens to identify with it and feel it is theirs, it may also require some determinacy in the definition of its membership: in who is an ‘insider’ and who is an ‘outsider’. Voting systems that require careful and uncontested calculations of majorities are especially dependent on this requirement.

On top of all this, we will later encounter the argument that the self-determining ideals of democracy must extend to the design of democracy and presumably, therefore, to the definition of the demos themselves.

Amongst relevant measures of this indicator are: (1) degree of identification with the EU by member state, by social group, and by knowledge of the EU; and (2) perception of importance of the EU in relation to other levels of government.