How far are voters offered choices that allow them to exercise public control as equals? 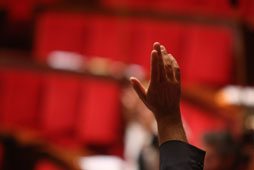 Choice and political competition is the third indicator of the EU democratic audit.

In practice this indicator comes down to the role of political parties in intermediating between citizens and the political system. Political parties are needed to structure voter choice in elections. In an ideal world voters would have just that choice in elections that allows them to choose in the way in which they want to choose, whether that is a matter of choosing between alternative policies or choosing between alternative leaders. However, even in perfectly competitive party systems, it would be difficult for parties to anticipate exactly how voters want to make their choices; and in practice; of course, most party systems are less than perfectly competitive. Even allowing for the recent success of protest parties, there are significant barriers in many systems to the entry of new political parties to the process of electoral competition or to the reconfiguring or realignment of existing parties. This means that many voters are constrained in their choices by the range of parties, policies and leaders on offer.

One measure of whether voters feel they have a satisfactory choice is provided by a question that has long been asked by opinion polls: namely, whether they feel close to a political party. This is a problematic question, since different people may answer it in different ways. Some may interpret the question as asking them whether they identify with a political party. Others may see it as asking them whether there is a political party that has policies they can agree with. Still, it does provide us with some measure of whether voters feel that there is at least one party on offer for which they can vote.

Across the Union as a whole, the number of citizens who do not feel close to any one political party outnumber those who do. However, variation across member states is huge, as shown in the last column of Table 3.1. 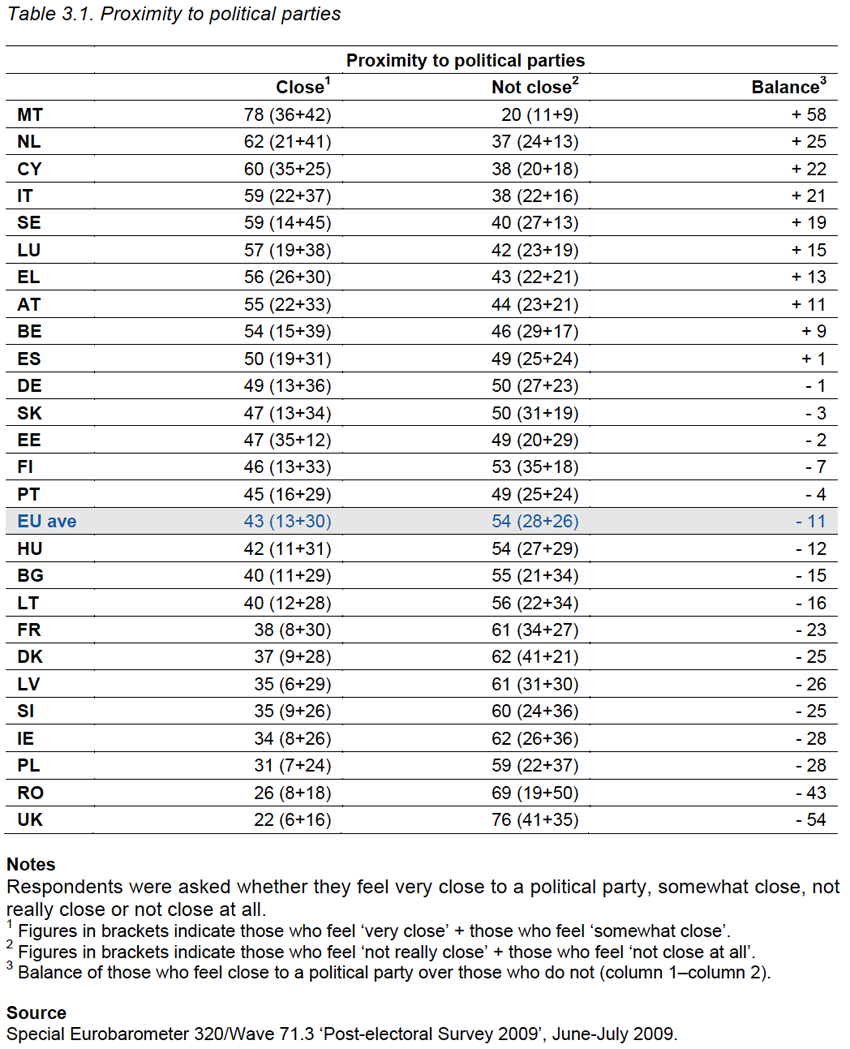 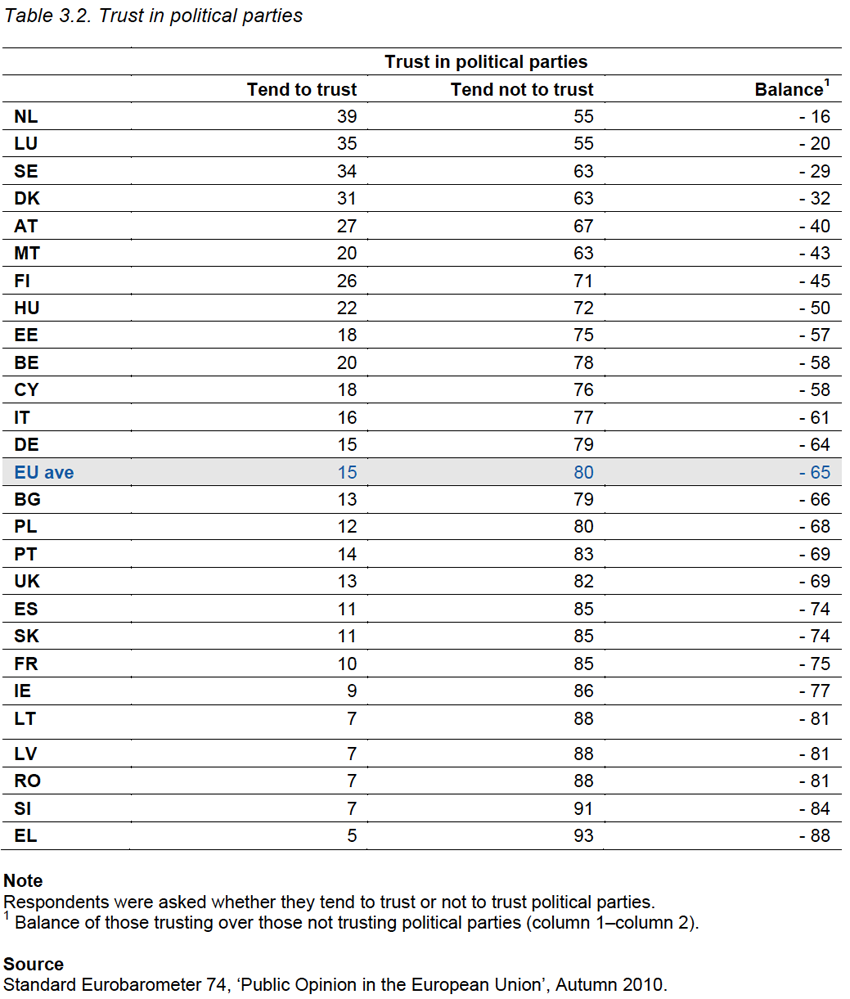 3.3 Inclusiveness of the representation of national political parties in the European Parliament

RECON Model 1 would presumably imply that the powers of the European Parliament are best understood as a delegation of powers from national parliaments. That it has, in other words, been delegated with the powers to monitor other EU institutions on behalf of national parliaments. Maybe, for example, national parliaments would face substantial asymmetries of information in seeking to control Union decisions that can be best overcome by delegating the task to a dedicated European Parliament that can specialise in following Union decisions and building up the expertise needed to do that.

The third column of Table 3.3. shows that it does, indeed, include a wide range of the national parties found in most member states. The first and second column of the table compares the effective number of parties represented in national parliaments and the EP. In other words, it also allows for variation in the size of the representation given to different national parties at the two levels. Here member states vary. In some cases, the effective number of parties represented in the EP is higher than in national parliaments. In others it is lower. 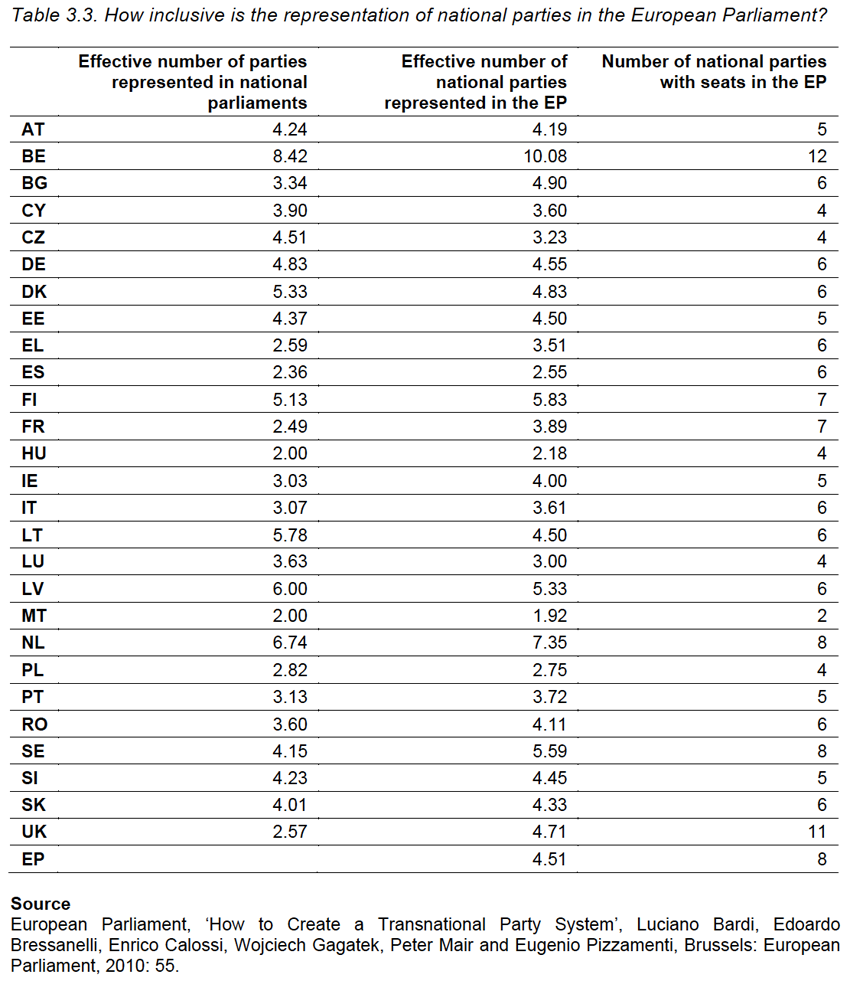 3.4 Fit between the national and European party systems

As seen, the EU operates a two-level party system. National parties structure voter choice in European elections. Yet European party groups exercise the powers of the European Parliament once it is elected. That raises the question of the ‘goodness of fit’ between party systems at the two levels. One possible measure is provided by how often national party delegations are able to vote the same way as their European party groups.

3.5 Cohesion of party groups in the European Parliament

It is a matter of some dispute how far cohesive and disciplined political parties are desirable from a point of view of democratic standards. Party disciplines can stifle political debate and constrain individual representatives in the representation of their own voters.

Yet from at least one point of view party disciplines can be helpful. Individual representatives come and go. Yet political parties often continue for a long time. This may mean that political parties can be held accountable over long periods of time in ways in which individual representatives cannot. On top of that, parties compete around broad programmes of government. Thus they can be held accountable for how they aggregate individual issues. This provides voters with some choice control over how value trade-offs are made across the range of public policies.

By Christopher Lord
E-mail this page