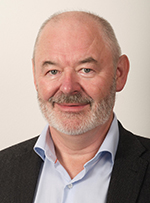 John Erik Fossum's main fields of research include political theory, democracy, constitutionalism in the EU and Canada, as well as Europeanisation and transformation of the nation state. In the last two decades, Fossum has contributed extensively to the field of developing and applying federal and democratic theory to the EU as a distinct political system, and comparing the EU with Canada. Key contributions are co-edited and co-authored books such as the following with E. O. Eriksen, Democracy in the European Union: Integration through Deliberation? (Routledge, 2000), Rethinking Democracy and the European Union (Routledge, 2012), The European Union’s Non-Members: Independence under Hegemony? (Routledge, 2015), and The Constitution’s Gift with A. J. Menéndez, as well as a broad range of articles and book chapters. He is co-editor of the Routledge Studies on Democratizing Europe.

Fossum is Professor at ARENA. He has been professor at the Department of Administration and Organization Theory, University of Bergen and holds a PhD in political science from the University of British Colombia, Canada.

From February 2019, Fossum is the scientific coordinator of the H2020-funded project EU Differentiation, Dominance, and Democracy (EU3D), which runs for 4 years and has ten partner universities and think tanks across Europe.

His work has informed and inspired a number of large research projects where he has played a leading role, including Integration and Division: Towards a Segmented Europe? (EuroDiv), Reconstituting Democracy in the European Union (RECON), The Norwegian Constitution in a Changing European Context (NORCONE), and Reconsidering Complex Diversity in the EU and Canada (RECODE).

Fossum is PhD co-supervisor in the MSCA-ITN The Post-Crisis Legitimacy of the European Union (PLATO) and participates in the project Negotiating diversity in Expanded European Public Spaces (PLURISPACE), funded by the HERA (Humanities in the European Research Area) network. He particpates in several Erasmus+ Jean Monnet networks, notably VIADUCT (Enhancing Visibility of the Academic Dialogue on EU-Turkey Cooperation) and PELEEA (Post-Brexit Europe: Lessons from the European Economic Area).

Fossum has written more than 150 academic publications, including 19 (co-)authored and (co-)edited books, seven co-edited journal special issues and over 100 articles and book chapters on European and Canadian issues.

Fossum, J.E. , R. Kastoryano, and B. Siim (eds), Diversity and Contestations over Nationalism in Europe and Canada, Palgrave, 2018.

Det norske paradoks: Om Norges forhold til Den europeiske union (co-authored with Erik O. Eriksen), 2014, Universitetsforlaget. The Norwegian paradox deals with the impact of Norway's EU accession for democracy and asks if it affects the preconditions for constitutional democracy?

Rethinking Democracy and the European Union (co-editor with Erik O. Eriksen), 2012, Routledge. This book looks at both the concept of the EU as a political system, and analyses the meaning and status of democracy in Europe today. It draws upon leading scholars and practitioners from the RECON project (Reconstituting Democracy in Europe) to frame and analyse a range of institutional realms and policy fields, including constitutionalisation, representative developments, gender politics, civil society and public sphere, identity, and security and globalisation. Drawing together these strands, the book questions whether EU politics require a new theory of democracy, and evaluates the relationship between union and state, and the possible future of post-national democracy.

The Constitution’s Gift, Boulder, Co.: Rowman and Littlefield, 2011 (co-author: A.J. Menendez). The authors consider the process of forging the EU's constitution and the set of fundamental norms that define the institutional structure, the decision-making procedures, and the foundations of the Union's democratic legitimacy. Their analysis illuminates the distinctive features of the EU's pluralist constitutional construct but also the interesting parallels to the Canadian constitutional experience and provides the tools to understand the Union's development, especially during the Laeken (2001–2005) and Lisbon (2007–2009) processes of constitutional reform.