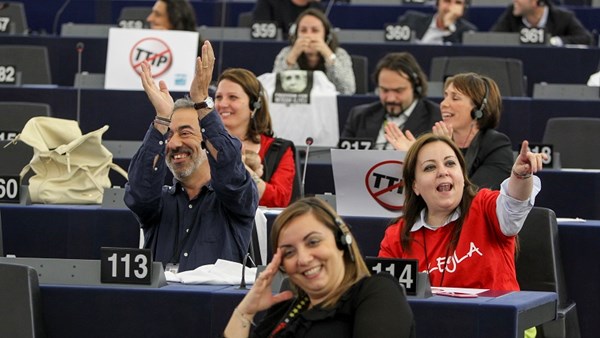 The United States and the EU have been negotiating the Free Trade agreement TTIP since 2013, but have faced loud opposition from "disturbing elements" in the European Parliament. Here illustrated with the two Italian MEPs Marco Affronte and Laura Agea from the euroskeptical party group EFDD. Photo: European Union, 2015

Traditionally only technocrats and members of governments have played a role in international negotiations, explains Guri Rosén, post doctor at ARENA Centre for European Studies at the University of Oslo. Elected Members of the European Parliament (MEPs) were essentially excluded from trade policy and foreign policy. But since the Treaty of Lisbon came into force in 2009, the power of the European Parliament has significantly increased, partly because the MEPs participated in the formulation of the EU Constitution.

In her research, Rosén analyzes what kind of influence MEPs have got and how they are handling their new and extended role.

As a consequence of the greater involvement of the European Parliament in trade negotiations, other interests and values were emphasized, also those not directly related to the trade itself, such as sustainable development, human rights and digital security.

– How do the technocrats react to this?

– In order to interact with the MEPs, the technocrats have seen the need to use a somewhat different language. While the MEPs want to discuss politics, sustainable development and human rights; the technocrats focus on technical details, such as the effects of licensing processes and increased tariffs.

The greater involvement and visibility of the MEPs is clearly demonstrated in the negotiations on Transatlantic Trade and Investment Partnership (TTIP), according to Rosén. Especially in Germany, the TTIP was high on the agenda: There were a lot of protests, organized by NGOs and civil society organizations, which undoubtedly affected some MEPs and led them to oppose parts of the agreement, especially the controversial dispute settlement mechanism.

Lack of support from voters

Through her research, Rosén has found that the MEPs are increasingly challenging the power of national governments.

– MEPs claim their right to exert influence over trade deals, which is something qualitatively new, at least in a European context. How many times have Members of Stortinget, the Parliament in Norway, been involved in trade deals? she asks rhetorically.

– The EU is regularly criticized for its democratic deficit. Is the increasing influence of the MEPs part of a move towards greater democratization?

– Potentially yes. The Parliament is the only popularly elected body in the EU, and its role is to make sure that questions important to “regular people” are taken into account in trade deals. Because they are in regular contact with the EU Commission and have access to information, they are also able to follow trade policies more closely than before. Nevertheless, the European Parliament still faces a lot of democratic problems. While its power increases, support from voters decreases. A lack of public awareness around their efforts and achievements, undermines the contact with citizens.

The European Parliament as a disturbance

Reaching a trade agreement often takes several years. Most of them are already settled when presented to the Parliament, also in Norway, and there is always a risk that the national MPs may reject a trade deal which may have taken years to reach.

As such, Parliament Members are often seen as a kind of disturbing element in the finalization of a negotiation processes that were more than complicated enough already. Because of the risk of a veto, the MEPs are often included much earlier in the negotiations, such as in the TTIP negotiations, which may explain why the veto right is very rarely used. It is also in the interest of the European Parliament to avoid tensions around EU’s trade policy.

– Many MEPs would like the EU to involve in more trade deals. And this is a matter of trust and how responsible the EU wants to be seen as a trading partner, Rosén explains.

As such, MEPs are torn between the idea of promoting, not derailing, international negotiations, and still responding to the criticisms from civil society against trade deals.

In the last few years, several extensive trade deals have come about, such as CETA (EU and Canada), TISA (EU, Norway and 21 other countries) and TTIP (EU and the US). These deals are challenging national sovereignty in a whole new way.

– Considering how much is at stake with these trade deals, shouldn’t one expect more political struggles on an earlier stage?

– Yes! These are enormous and decisive trade deals. Their size and complexity is something totally new, both when it comes to regulations – the so-called non-tariff barriers to trade – and the development of rules. The investor-state dispute settlement sparked enormous outrage and really put TTIP and trade politics on the agenda. Part of it has to do with the idea of dealing with American companies. Seeing how big and powerful they are, a lot of people fear that they may completely run over national governments.

The European Parliament is put under a lot of pressure from both the civil society and the business sector. While the opponents of the trade deals are emphasizing  the principles, how the deals give preference to big business at the cost of national freedom; the supporters, on the other hand, use practical arguments, how the deals will be profitable and economically sound.

A culture of secrecy?

In the beginning of the TTIP negotiations, it was mainly the interests of national and multinational companies that were taken into account, while civil society organizations were excluded.

Representatives from civil society were later included in the process, serving as an advisory panel to the commission after every round of negotiations. This panel is now a formal expert group.

– There is a danger that the Commission uses this expert group merely as a tactic, in order to silence various interests groups and avoid claims that the processes are excluding and undemocratic.

While greater transparency around trade negotiations is highly welcomed, it may also reveal the interests of the EU and thereby affect the negotiations, says Rosén. She also points out that many MEPs are shaped by the culture of secrecy, in which they have privileged access to information.

– MEPs have several times argued that secrecy is necessary to protect the interests and the security of the EU. Although this may be right, a lack of transparency always has to be thoroughly grounded and reflected upon. The people deserve to know why trade negotiations are given priority over democratic values. The NGOs and the civil society have to keep up the pressure to make sure the doors remain open, Rosén says.