Anthropologists and biologists are combing the rivers on four continents in their search for a fish which has its origins in British imperialism. 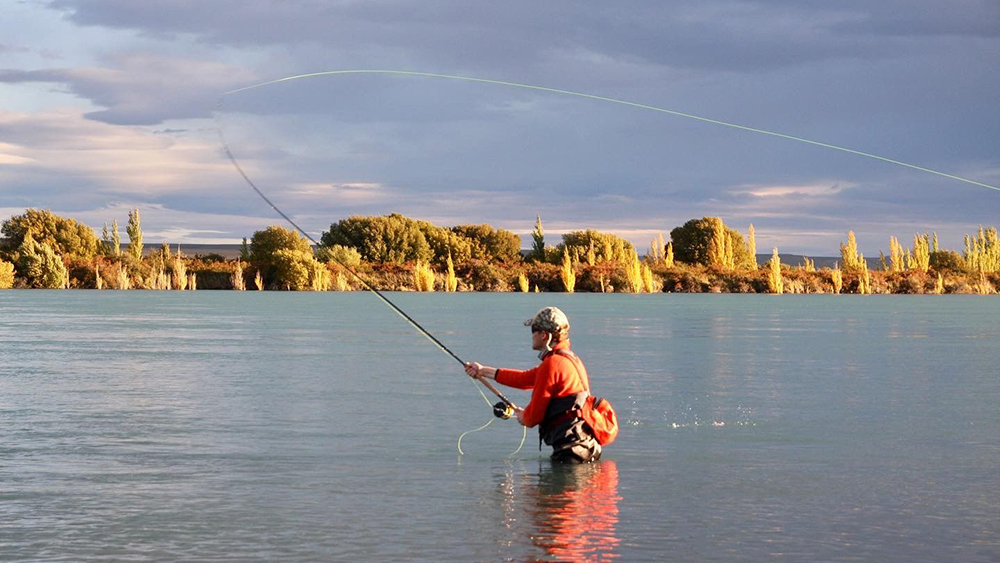 Trout are not easy to catch. Maybe that is why this colourful creature had spread to all corners of the world by the end of the 19th century. Officers and settlers in British colonies were willing to move heaven and earth in order to cultivate their favourite hobby, fly fishing.

Today, brown trout and rainbow trout are found in more than a hundred different countries and on every single continent except Antarctica. These species are featured on the list of the International Union for Conservation of Nature (IUCN) of the 100 worst invasive alien species in the world and they are known to have a major adverse impact on local fauna.

In many countries it has become official policy to eradicate brown trout and rainbow trout. As in South Africa.

"The South African environmental authorities and white, conservative environmentalists want trout to be removed from the country's rivers and lakes, because they are an alien species," says Knut Nustad.

He is a professor at the Department of Social Anthropology (SAI) and he and Associate Professor Heather Swanson from Århus University are the joint heads of Global Trout. Under this project biologists, historians and anthropologists have joined forces to conduct interdisciplinary research on rainbow trout.

"Those who make a living from trout in South Africa, either by engaging in food production or sport fishing tourism, have a completely different attitude.”

The issues raised by trout produce complex answers. Knut Nustad is currently located at the Institute for Advanced Study in Stellenbosch (STIAS), South Africa. During a six-month research visit, he will be paving the way for a book that will be produced by Global Trout. The anthropologist recently held a seminar about Global Trout at STIAS.

"We want to find out what this species can tell us about the consequences of man-made changes in nature," says Nustad.

By conducting fieldwork in South Africa, Argentina, Australia, Japan and England, the Global Trout team will be investigating global environmental challenges based on local variations with the same point of departure: trout.

"Trout are one example of how we can study phenomena that are simultaneously social and natural," says Nustad.

"If you want to understand the impact of how the British empire spread of trout all over the world, you need both biologists to look at the environmental consequences in the specific areas and social scientists to investigate the social effects.”

Pandemic in the way

That has been easier said than done. One fundamental idea for the project was for biologists, historians and anthropologists to visit the various field sites, engage in discussions and learn by being present at specific places.

Global Trout started in September 2019. Just over six months later, the world went into lockdown due to Covid-19.

“It has simply not been possible to achieve our aims. Argentina had such strict restrictions that nothing could be done. The same applied to Japan," says Nustad.

Extension granted by the Research Council of Norway

However, Global Trout is now finally up and running again. The project has received extended funding from the Research Council of Norway until the autumn of 2024, and the SAI has also received funding to establish the Network for Interdisciplinary Environmental Studies which will contribute towards increased long-term expertise on environmental research.

“The SAI has become a leading centre for social science research and education in the environmental field. This network will continue to pursue the interdisciplinarity of Global Trout by strengthening the exchange of researchers and generating new research applications and projects," says Nustad.

Global Trout is purely a research project, while the educational component is a key aspect of the Network for Interdisciplinary Environmental Studies. The network will facilitate the exchange of PhD candidates between centres in South Africa (the University of Cape Town and the University of Western Cape), Japan (the University of Tokyo) and the USA (UC Santa Cruz).

The project will also establish its own interdisciplinary PhD courses.

"That is something really important that we are doing in these two projects.”

Back in the field

Despite the pandemic, Knut Nustad has undertaken fieldwork on several occasions at a trout hatchery in Underberg, South Africa. Now that the travel restrictions in Argentina are no longer as strict, his colleague, Rune Flikke, Head of Department at the SAI, has finally been able to leave.

He has recent spent three weeks in Patagonia. Together with marine biologists Javier Ciancio and Julio Lancelotti, Professor Flikke has been involved in drifting down the Rio de las Vueltas river, one of the sources of Santa Cruz River. On this trip the team has observed the behaviour of the different species around spawning sites and they have dissected fish for isotopic studies. Stable isotopes provide information about the various species’ access to nutrients.

"I was also involved in the fieldwork conducted by the biologists in order to try and understand how they relate to the problem," says Flikke.

Rainbow trout have become a valuable resource for the tourist industry in Patagonia. Some of the most lucrative sites feature among the most exclusive fly fishing destinations in the world. This is reflected in the price.

It is not easy for anthropologists to become involved. Rune Flikke says that the owners are worried about negative attention.

“This has become big business. These destinations used to be open to the public and people could just come and go. They are now privately owned and fenced in," he says.

Flikke says that much of the revenue from the fly fishing industry goes to companies with foreign ownership stakes.

“I stayed with one of the landowners. He is now financially secure. But when I asked him how developments have affected his relationship with the place where he was born and raised, he did not reply. And then he told me that he felt like a stranger," Flikke says.

“He said that when the European and North American anglers arrived he felt like he was being put on display: 'There’s the trout and there's a gaucho.' He has become a tourist attraction in his own home."

The Chinook salmon is coming

The village of Piedrabuena lies at the mouth of the Santa Cruz River. In 2009, the Fiesta Nacional de la Trucha Steelhead was held there for the first time to celebrate the starting point of the anadromous steelhead trout’s migration up the river (NB: steelhead trout are a freshwater species that migrate to the sea to forage and return to freshwater in order to spawn). They travel up to 800 km before spawning takes place at the foot of the Andes Mountains.

This trout festival is held each year at the end of March/beginning of April – with concerts, microbreweries, market stalls and local crafts. People from all over Argentina, as well as tourists from North America and Europe, flock to Piedrabuena.

"This festival has provided an essential boost for the economy,” says Flikke.

As part of his fieldwork, the anthropologist attended the festival’s main event: the fishing competition. Flikke was lucky and landed a rainbow trout of acceptable size, securing him second place. The winnings were donated to the local hospital which had been struggling during the pandemic.

«Overall Global Trout could contribute towards a better understanding of complex relationships between human activity and natural processes.»

Three years ago, a similar festival was established: Fiesta Provincial del Salmón Chinook. The rainbow trout in the Santa Cruz River have been joined by another alien species: the Chinook salmon, which can grow up to 30-35 kg and is the world's largest anadromous fish. They have recently established themselves in the Rio Santa Cruz watercourse after escaping from the Chilean aquaculture industry.

These salmon are destroying the spawning grounds of other fish in the river.

"They are large and dominant," says Flikke, who has written about the Chinook invasion in the Spanish journal, Desde la Patagonia.

After spawning, the Chinook salmon die in part of the Parcque Nacional Los Glaciares, thereby changing the ecosystem in the area which is a UNESCO World Heritage Site. On the northwest coast of the United States, where the species originally comes from, the bodies of the dead fish are eaten by grizzly bears. In Argentina the fish lie and rot along the river banks.

“Chinook salmon have also expedited the debate about the introduction of rainbow trout: should we eradicate them, or not?” asks Flikke.

According to him this is despite the fact that the species has a history extending back well over one hundred years, as is also the case in South Africa.

“The salmon have started attracting tourists, and this new festival is an example of renewed activity at a time of year when it is actually winter, and cold and dark. Chinook salmon have become very important, precisely because they migrate up the river at a time when there are not many jobs around, when incomes are low and when not much is happening."

The local biologists with whom Flikke has been in contact are aware that both rainbow trout and Chinook salmon are alien species and that they do not belong. According to Flikke, the team's biologists are working on analysing the impact on the whole ecosystem. At the same time, the residents of Piedrabuena are emphasising that these alien species have become vital to the economy and in preventing people from leaving.

“While people further up the river have a different viewpoint. They get rotting fish on the river banks, and can no longer drink the water,” says Flikke.

“This is a very real conflict and we held a 1-day workshop for all the parties involved in order to explore the situation.”

The aftermath of mink farming

To top it all, North American mink are another new species that has entered the ecosystem. Fur farming used to be conducted in the area around the Santa Cruz River. Now that the industry has been discontinued, the mink have been released and these predators do not have any natural enemies.

Rune Flikke says that the mink have started to eat the salmon along the river banks. At the same time they catch birds, such as the hooded grebe (maca tobiano) – an endangered species, with just 650-800 birds left in the world.

“Hooded grebes have never had to deal with anything more dangerous than an eagle, so all their attention is directed upwards. Suddenly mink are swimming in the water and they can empty a lagoon full of birds in just half an hour. Even though the mink have become important scavengers of the dead Chinook salmon, they are creating new problems in other areas," says Flikke.

"Identifying these relationships is key to our work at Global Trout.”

Before Knut Nustad returns home from South Africa, he is hoping to complete the structure of the book that will emerge from the Global Trout project. The aim is a create a co-written publication in 2024, with biologists and anthropologists jointly collating their ideas about environmental challenges and their experiences of living with nature that has been altered throughout the history of colonialism, exemplified by the spread of rainbow trout.

"Overall Global Trout could contribute towards a better understanding of complex relationships between human activity and natural processes," says Nustad.

He is excited about how the biologists’ empirical, positivist methods will stand up against the anthropologists' more open, hermeneutic approach.

"Basically Global Trout thinks that trout are both a local and a global problem, and this is providing us with the opportunity to study the connection between common global history and local effects. The project is about far more than just fish," says Nustad.

“Human activity often has major, unintended consequences, both biologically and socially. The aim of the project is to develop interdisciplinary methods for studying environmental challenges in general and finding solutions to them.”