Stable trends in unstable times: Right-wing terrorism and violence in Western Europe in 2020

Right-wing terrorism and violence in Western Europe in 2020 was not significantly influenced by COVID-19 nor by the activism of the Black Lives Matter movement. Instead, the RTV report recently published by C-REX shows that 2020 represents a continuation of previous trends. 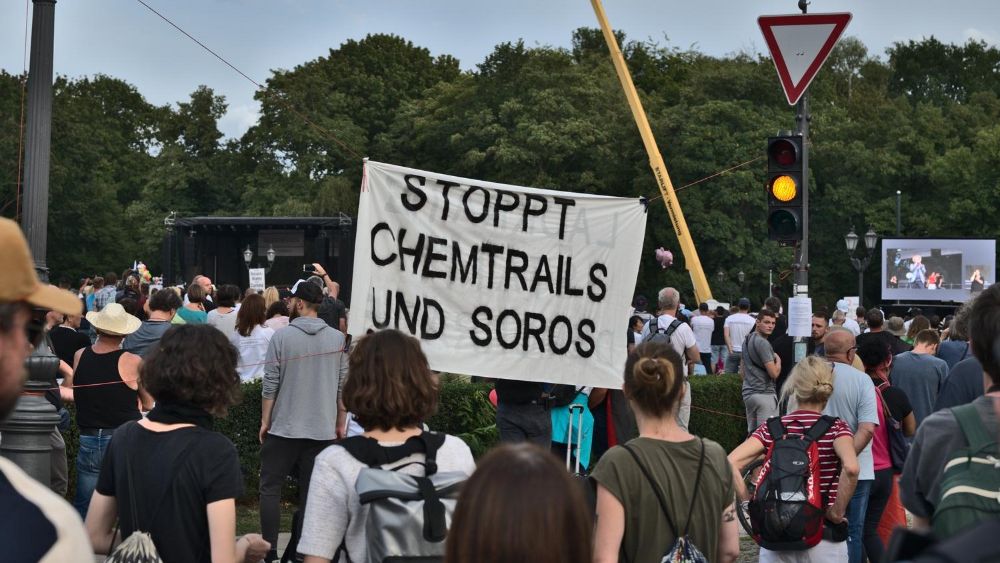 This is post 1 of 4 on findings from the RTV Trend Report 2021 on right-wing terrorism and violence in Western Europe.

A stable year in unstable times

The year 2020 was extraordinary in terms of the number of unsettling events with potential impact on right-wing terrorism and violence (RTV). The COVID-19 pandemic generated conspiracy theories, economic crisis, and growing animosity toward European governments, fuelling far-right propaganda. Controversy surrounding the 2020 US presidential election caused unrest and revolutionary aspirations among several far-right actors. And the US police murder of George Floyd generated new waves of Black Lives Matter protests across the world, at times confronted by violent counter-protesters from the far right. Violent extremists were hypothesized to exploit the situation and “use the virus as a weapon to kill minorities” in an accelerationist attempt to further spread hate and conspiracy.

However, data from 2020 shows that the events had little influence on right-wing terrorism and severe violence in Western Europe. Rather, with only two fatal events, 2020 ranks among the bottom five years since 1990 in terms of events with fatal outcomes and fits into a long-term trend of declining levels of fatal attacks. 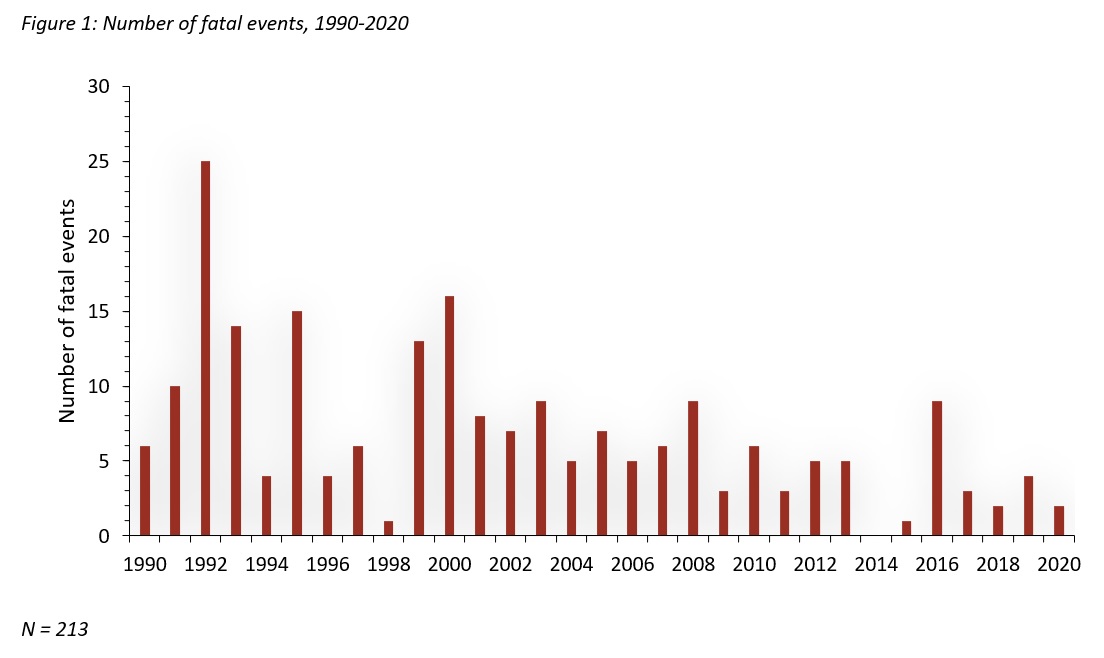 While 2020 is among the bottom five years in terms of fatal attacks, it is, with 11 people killed, among the ten most deadly years since 1990 in terms of fatalities. The 1990s and early 2000s saw numerous fatal attacks committed by persons belonging to the skinhead subculture. These events were often characterized by two or more people attacking a single victim, often immigrant or homeless, with fists, knives or blunt objects. In recent years, such fatal attacks have declined and been replaced by a few mass-casualty attacks committed by lone-actors using firearms. Only three such attacks have occurred in the last thirty years in Western Europe and all have all taken place in the last ten years - 22 July attack, the Munich shooting in 2016 and the Hanau shootings in 2020.

Lone actors carried out one third of all right-wing extremist attacks in 2020 making them the most common perpetrator of fatal and severe forms of violence for the fifth year in a row. A common feature among such lone actors is the spontaneous nature of their attacks against ethnic and religious minorities. For example, in Spain, a man of Moroccan origin was racially insulted and attacked at a gas station, allegedly for looking at the perpetrator and refusing to give him money. In Germany, a Lebanese man was stabbed in the neck for attempting to intervene in an argument between the perpetrator and two Syrians.

Both fatal events in 2020 were carried out by lone actors. The first attack occurred on 19 February when a 43-year-old German man went on a shooting spree targeting two shisha bars in the city of Hanau, in central Germany. He killed nine people and wounded five. Prior to the attack, the perpetrator published a manifesto and videos on his personal website outlining his conspiratorial worldview, including anti-migrant and racist sentiments. The second fatal attack occurred in Portugal on 25 July and was also motivated by racist sentiment. The perpetrator – an older white man – shot a black man four times at point-blank range in broad daylight, days after a quarrel over the victim’s dog.

Although signs of direct inspiration from the terrorist attacks in Christchurch are lacking, the attack in Hanau can be seen as the latest event in a worrying trend of mass-casualty attacks perpetrated by lone actors, discussed in last year’s RTV trend report. The Christchurch attacks inspired multiple plots in 2020 across Western Europe. For instance, in France, a former soldier was arrested after being suspected of planning an attack against the Jewish community. He had increasingly begun to post messages on social media, promoting "the great replacement" and presenting himself as a worshipper of the Christchurch shooter.

In 2020, and consistent with previous years, the majority of the attacks targeted ethnic and religious minorities. While political opponents were the second most targeted, there continues to be a clear difference between Northern and Southern European countries. In Italy and Spain, political opponents were targeted more frequently than in any other countries. Although Muslims and Jews were rarely targeted in physical attacks, they were a key target group in right-wing terrorist plots. For example, while no fixed location or a specific attack plan could be determined, a student attempted to build a bomb to attack synagogues and mosques.

While we observed substantial mobilization and protest relating to the COVID-19 pandemic, very little of this protest materialized as severe violence. Out of the 149 events registered in 2020, only nine events were coded as directly linked to the COVID-19 pandemic (coded as such if the perpetrator(s) explicitly mentioned the virus during the attack or if the incident and/or target selection suggested such a link). This is not to suggest that the coronavirus did not underpin innumerable cases of racial harassment and less severe violence, often involving racist abuse. What the data does suggest, however, is that the pandemic and associated biases have not heavily influenced the level of severe right-wing violence.

While most patterns constitute continuing trends from previous years, two new patterns are worth highlighting. First, while targeting of black people (i.e. violent attacks where the perpetrator explicitly mention skin colour as the reason for the target selection) has been nearly absent in our coding from previous years, we noted a significant increase in such attacks in 2020. Second, we recorded five attacks carried out by on-duty uniformed personnel with sufficient information regarding explicit targeting based on right-wing beliefs, including two incidents from France. One of the events, in which a music producer was physically assaulted in his studio, prompted President Emmanuel Macron to state that France should never "resign itself to violence" or "let hatred or racism prosper."

Both patterns may relate to the upsurge in the Black Lives Matter (BLM) movement, which led to increased reports of, and media attention related to, past and recent misuse of power by on-duty uniformed personnel such as police officers, private security firms and military personnel. Targeting of black people may also be seen as an extremist response to growing recognition in the general population of minority grievances relating to ethnic identity, by members of the white majority that do not approve of such a development. We might therefore see continued targeting of black people and other minority groups in future attacks, particularly in places where these minority groups are becoming more self-assertive.

Despite an unsettling year, we found that major societal crisis tapping into grievances held by the far right do not necessarily translate directly into severe violent actions in the context of Western democracies. Little of the protest relating to the COVID-19 pandemic materialized as severe violence. That said, there might be a time lag effect here. For instance, many violent reactions to the 2015 refugee crisis occurred in 2016.

At the same time, it is important not to exaggerate the violent threat from today’s extreme right movement in Western Europe and thereby cause unnecessary fear among vulnerable target groups. As this year’s trend update shows, fatal right-wing violence is becoming increasingly rare, and some of the violence we are seeing can be understood as a reaction to the fact that minority groups are becoming increasingly accepted by the majority population in Western Europe.