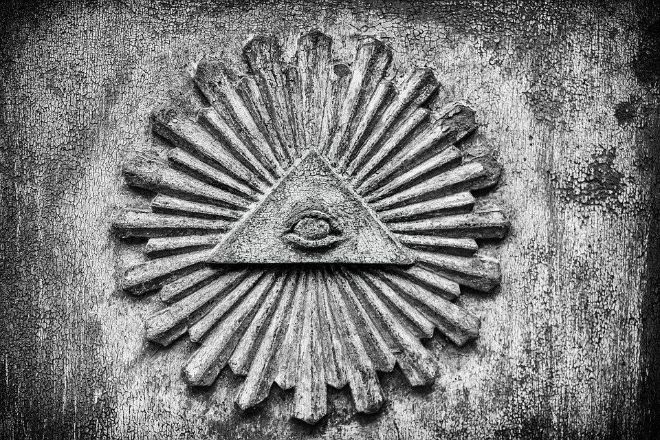 The Eye of Providence: a common occurrence in conspiracy theories and Illuminati references (Pixabay License)

The content of the “manifesto” left behind by the perpetrator of the Hanau-attack in Germany, Tobias Rathjen, makes it apparent that he held extreme-right ideas, most notably racism. Rathjen displays notions typical of traditional National Socialism, including key concepts like the imminent threat to the German “Volk” and the superior “Germanic race”. Furthermore, he advocates not only the expulsion of foreigners from Germany, but also the complete annihilation of the racially inferior population in a wide range of countries in the Middle East and Asia. His racist views clearly motivated his target selection of victims. In addition to killing his mother, the perpetrator targeted two shisha bars shooting nine German and foreign citizens aged between 21 and 44.

Beyond some references to elements of National Socialism, his manifesto, YouTube video and website hardly refers to current far-right ideology or movements. Most of his attention is devoted to discussing a variety of conspiracy theories. For example, on February 14th Rathjen posted “a personal message to all Americans” on YouTube. Here he claimed that the country is controlled by “invisible secret societies”, which use mind control-techniques and which are conducting satanic ritual killings of children in “underground military bases”. On his website, he links to pages devoted to government cover-up of UFO contact, alien abductions, satanic ritual abuse, masonic conspiracies, time travel, alien races and telepathy. All this gives us a glimpse of a dark conspiracy culture into which Rathjen has immersed himself. It seems likely that this culture constituted one of the primary driving forces behind his radicalization process, which ended in the mass shooting in Hanau.

The Hanau-attack suggests that, combined with extremist or racist ideals, conspiracy theories may act as “radicalisation multipliers”: by reinforcing intergroup polarization via the demonization of “the others”, they might lead to a feeling of alienation from and hostility towards society and increase the likelihood of individuals to engage in violence. This is far from the first case of an extreme-right perpetrator mixing his political views with conspiracy theories. In fact, research on conspiracy theories has since long noted a close connection between such theories and extremist ideologies. This connection stems partly from several commonalities in thinking, such as rigid and simplistic thought patterns, apocalyptic thinking and a dualistic division of the world into friends and foes. However, conspiracy theories also provide people with divergent, marginal and extremist views with an “explanation” of their marginality: The “truth” have not (yet) come out because demonic forces are suppressing it, keeping the population in ignorance. One of the consequences is that both extremist and conspiracy theorists show a propensity for “cognitive isolation”: Since ‘the enemy’ controls the flow of official information and most media outlets, “seekers of the truth” must isolate themselves from this propaganda. For example, in his YouTube-message, Rathjen urges Americans to “turn off the mainstream media”. The population need to acknowledge that society is controlled by the demonic forces of a “deep state”. They must “wake up” and “fight now”. In this sense, it seems likely that Rathjen perceived his terrorist act as a “wake up call”.

While it has also been shown that conspiracy theories constitute one of the main ideological components in many religious and political extremist groups involved in acts of terror, we need more research on their content, causes and consequences. Within research on far-right extremism in particular, there is very little knowledge about conspiracy theories beyond the usual suspects such as Zionist Occupation Government (ZOG) and Eurabia. This is unfortunate given that, for such groups – and most likely also for more isolated individuals like Rathjen – conspiracy theories, including more diffuse conspiratorial thinking, often function as “radicalisation multipliers”: they go hand in hand with an increased acceptance of violence and might help making sense of why individuals decide to move to action.

By Terje Emberland
E-mail this page