The Al-Noor Mosque in Baerum, the venue for the mosque shooting in Norway, August 2019. Photo: Screenshot from Google Streetview

The RTV trend report 2019, which covers severe forms of right-wing terrorism and violence in Western Europe between 1990 and 2018, shows that the number of fatal attacks with an extreme-right motive have decreased significantly in recent decades: From 96 attacks in the 1990s to 75 in the 2000s and 34 in the 2010s (2019 is not yet included). Despite an uptick in 2016 with nine fatal events, which is most likely the result of far-right reactions to the ‘refugee crisis’, the numbers for 2017 and 2018 were three and two, respectively – among the lowest on record.

The data comes from the Right-Wing Terrorism and Violence (RTV) dataset, which was built following the 22 July 2011 terrorist attacks in Norway and the discovery of the German terrorist cell Nationalsozialistischer Underground (NSU) the same year. These events uncovered a gap in our knowledge about recent trends in right-wing terrorism and violence in Western Europe. To narrow the existing knowledge gap, as well as address some of the methodological limitations of other datasets and sources (e.g., GDT, TWEED, EUROPOL), the RTV dataset offers a systematic assessment of the most severe forms of violent attacks and plots in 18 West European countries since 1990 whose target selection is based on right-wing beliefs.

Most of the violence takes place in a few countries

When looking at the combination of both fatal and non-fatal events in the first RTV dataset (1990-2015), Jacob Aasland Ravndal (2018), found that six countries had experienced considerably more right-wing violence than others: Sweden, Germany, Italy, the UK, Greece and Spain. Figures for 2016-2018 show that these countries are still among those with the highest records of both fatal and non-fatal events (fatal attacks in parenthesis): 68 (5) in Germany, 23 (2) in Greece, 22 (1) in Italy, 20 (3) in the UK, 7 (0) in France, 6 (1) in Spain and 6 (1) in Sweden. These figures include the 2017 Finsbury Mosque attack, the stabbing of an Albanian man by a Golden Dawn affiliate in Greece (2018), and a homophobic murder that took place in Aue, Germany, in 2018.

Almost all fatal events recorded in the dataset took place in the countries listed above. The only exception is Finland, which despite having only a few non-fatal events, also recorded one fatal event. In 2016, a member of the Nordic Resistance Movement kicked a 28 years old man who was passing by the group’s demonstration in the capital city, Helsinki. The man died of cerebral hemorrhage a week later. The Finnish government banned the organization following this attack, marking the first time a Finnish group had been banned since neo-Nazi associations founded by Pekka Siitoin were banned in the 1970s.

From unorganized perpetrators to lone actors 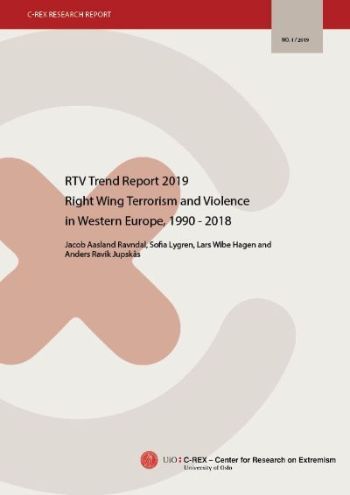 If we look at the distribution of perpetrator types over time since the 1990s, the most notable trend is that (skinhead) gangs and unorganized perpetrators are decreasing, both in absolute numbers and relative to other perpetrator types. Autonomous cells (e.g., NSU) are also decreasing, even though they never really constituted a significant perpetrator type. Right-wing terrorism and violence by organized groups (including affiliated members) continue to be marginal. Finally, and perhaps somewhat surprisingly, the number of lone actor attacks has remained quite stable. However, due to the gradual decrease in attacks by the other perpetrator types, the proportion of fatal attacks perpetrated by lone actors has actually increased. In other words, so-called ‘lone actors’ carry out most of the right-wing violence in contemporary Western Europe.

Most attacks target migrants and minorities

Right-wing extremists continue to target groups they consider to be the ‘Other’ (e.g., foreigners, ethnic and religious minorities), in addition to political enemies (e.g., left-wing activists, pro-immigration activists, the media, and separatists) and parts of the ‘State’ (e.g., government officials and police), as well as people they consider ‘weak’ (e.g., homeless and physically and mentally disabled people), or ‘deviant’ (LGBT victims). Migrants and minorities (the category ‘Other’) are not only the main target of right-wing violence, but also increasingly at the core of their attacks, accounting for 51 per cent of RTV episodes in the 1990s, 61 per cent in the 2000s, and 67 per cent of the attacks henceforth. Zooming in on the ‘Other’ category, fatal attacks explicitly targeting Muslims have gone from none in the 1990s to 19 percent in the 2010s. While Jews were victims of three fatal attacks in the 1990s, no fatal attacks explicitly targeting Jews have been recorded between 2000 and 2018 (but we already know there was at least one fatal anti-Semitic attack in 2019, namely the Halle synagogue shooting). The second most frequent target group is ‘Political enemies’, who have been victims of 13 to 15 per cent of all fatal attacks in all three decades. RTV also target the ‘Weak’, the ‘Deviant’ and the ‘State’. Each of these groups represents 6 per cent of fatal attacks in the 2010s.

What’s next? An upsurge of online-inspired attacks

The next RTV trend report, to be published later this year, will provide further evidence about continuity and change in contemporary extreme right violence and terrorism in Western Europe. In partial discontinuity with the figures illustrated here, the year 2019 was in fact characterized by an upsurge of Chan-inspired attacks by lone actors with the ambition of mass killings. Notably, two fatal attacks inspired by the Christchurch shooter in New Zealand took place in countries covered by our study; one targeting a mosque in Bærum, Norway, and one targeting a synagogue in Halle, Germany. Additionally, UK police intercepted a similar plot in Luton, stopping the perpetrator from carrying out his plans of committing an atrocity. It remains to be seen whether this new modus operandi will become an enduring characteristic of right-wing terrorism and violence in Western Europe. In any event, these developments confirm that lone actors have become the most common perpetrators of severe right-wing violence in contemporary times, and are likely to pose the main terrorist threat also in the nearby future.