What explains why people join and leave far-right groups? 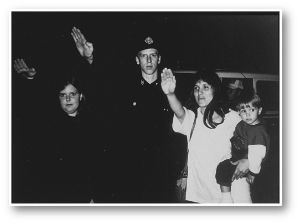 An alternative to the radicalization paradigm is the push, pull, and barrier model,[3] which may be applied to all varieties of ideology and/or groups engaging in violence. When individuals join – or leave – an extremist group, it is usually due to a combination of push and pull factors, which vary between individuals, kinds of groups, and characteristics of the members (e.g., gender, age, mental health, level of ideological conviction, etc.). Push refers to negative social forces and circumstances that make it unattractive and unpleasant to remain in a particular social situation or environment, whereas pull refers to factors attracting the person to a more rewarding alternative. Barriers are the perceived negative consequences of joining or leaving an extremist group, serving as inhibitors to change. Importantly, what constitutes the specific push, pull, and barrier factors may vary considerably between individuals and kinds of groups.

There are five types of participants that can be found in various combinations across all ideological movements.[4] People who fall within these different categories will have differing trajectories and reasons for joining extremist groups.

These five types may be found in different proportions across different groups and movements. Ideologists are indispensable in all groups, but tend to be more numerous among intellectually oriented movements like Generation Identity. Skinhead gangs tended to attract many youths with a need for belonging, those attracted to fighting, and those with a problematic background (i.e., followers, adventurers, and the angry and frustrated).

Participants in extremist groups are likely to sustain their engagement unless there is a favorable combination of push, pull, and barrier factors that enables their disengagement from the group. Push factors might be disillusionment about the ideology or the (lost) cause, infighting, changes in group climate,[8] manipulative leaders, paranoia about suspected infiltrators, loss of trust and status within the group, prosecution by the police or militant anti-racists, expression of dismay from important family members or friends, or burnout.[9] Cognitive dissonance is another potential push factor; a conflict between the violent activities of the group and the individual’s intuition about what’s right and wrong.[10]

Pull factors include finding a romantic partner outside the group and prospects of forming a family, forming positive relationships with outsiders or even former enemies, rebuilding broken family relations, opportunities to get a job, and prospects of having a “normal” and peaceful life without all the stressors of participating in violent activism.[11]

Barrier factors to leaving an extremist group include fear of reprisals from the group that might consider defectors as traitors with a potential risk of betraying group secrets.[12] A sense of belonging to and identity with the group also motivates an individual to continue both their membership and radical behavior.[13] Leaving the group may mean breaking ties of loyalty and close friendships, but also to lose protection against external enemies and opponents. They may also risk criminal prosecution for their involvement in violent extremism. Many fear stigmatization and end up in a social vacuum[14]. The repercussions of group memberships vary; having been involved with neo-Nazism seems to be more stigmatizing than to have been a militant antiracist.

Each one of these three factors may alone obstruct disengagement: Both push and pull factors have to be sufficiently strong to motivate an activist to leave the group. However, if the barriers are too high, they may still feel trapped in the group, despite wanting to leave.

Leaving the group and reintegrating into mainstream society is usually a long and complex process, with many returning to the group more than once before finally breaking all ties.[15] Doubts and disillusionment about the ideology and group is often experienced long before an exit, particularly among women.[16] Some succeed in leaving both their extremist views and group behind, and establish a firm foothold in mainstream society with a family, job, and social network. They are deradicalized, disengaged, and reintegrated. Others are disengaged, but keep extremist views, or sustain some friendly relations with group members but no longer believe in the ideology. A partial exit process such as this may impede full reintegration. However, even those who make a clean break with their extremist past may experience a variety of difficulties in their attempts to reintegrate, such as marginalization, stigmatization, identity residuals, shame and/or regret, and mental health issues.[17]

[17] Bjørgo (1997). Having been involved with national socialist movement carries a heavier stigma than most other militant movements, although ISIS is probably even more stigmatizing. An interesting documentary film about dealing with an extremist past and feelings of guilt is “Exit: Leaving Extremism Behind” by Karen Winther, based in interviews with three former Nazis, a former jihadist, and a former left-wing extremist. See also Simi, P., Blee, K., DeMichele, M., & Windisch, S. (2017). Addicted to hate: Identity residual among former white supremacists. American Sociological Review, 82(6), 1167-1187.

By Tore Bjørgo and Hanna Munden
E-mail this page