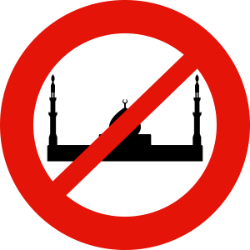 Islamophobia is the most used term to describe prejudice, negative sentiments, and hostility toward Islam and Muslims. Islamophobia can be based on ideas about Islam as a religion and on ideas about Muslims as a cultural and ethnic group. Islamophobic ideas portray Islam and Muslims as an existential threat to non-Muslims. Some argue that Islamophobia is the direct equivalent to antisemitism, and that Muslims have become the “new Jews” – the most reviled and at-risk minority. The “Eurabia” theory is a key pillar for Western Islamophobic circles, in which they believe that European elites and Muslim leaders have entered a secret plan to “Islamize” Europe.[1]

While what is understood as Islamophobia today has a long history, the term itself was coined in 1918 by two French researchers and converts to Islam. They used the term to classify what they saw as a political effort by colonial powers to undermine Islam.[2] However, it was not until the late 1990s that the term was popularized, with the British race equality think tank Runnymede Trust’s report Islamophobia: A challenge for us all.[3] According to the report, ‘Islamophobia refers to unfounded hostility towards Islam’. It acknowledges that although the term is ‘not ideal’, it is a ‘useful shorthand way of referring to dread or hatred of Islam – and, therefore, to fear or dislike of all or most Muslims’.[4] Since then, the term has been used both in politics and academia. Of the explicit conceptualizations, Erik Bleich’s definition of Islamophobia as ‘indiscriminate negative attitudes or emotions directed at Islam or Muslims’[5] has perhaps won the most ground within academia.

Its political use has led some to reject the term as being too normative. The main criticism pertains to the suffix phobia, which means morbid fear. It is commonly used to classify mental illnesses where the fear of something is both irrational and impossible to control. Another issue is that the term conflates opposition to Islam with prejudice toward Muslims. While opposition to Islam may translate into prejudice toward Muslims, empirical studies show that this is not a given.[6] To heighten the level of precision and set aside the focus on irrationality, some researchers replace Islamophobia with the two analytically distinct categories of anti-Islam and anti-Muslim.[7] Anti-Islam can be defined as ‘framing Islam as a homogenous, totalitarian ideology which threatens [Western] civilization’,[8] whereas anti-Muslim can be defined as ‘oversimplified beliefs, negative feelings and evaluations of Muslims as a group’.[9]

Even though Islamophobia remains a contested term and the abovementioned alternatives do exist, some scholars suggest keeping it simply because it has become the most widely used term to describe anti-Muslim and/or anti-Islam sentiments in the public debate and in academia. Rather than introducing new terms, scholars should help define precisely those that already exists.[10]

Organized mobilization against Islam and Muslims in liberal democracies surged after the 9/11 attacks in the United States by Al-Qaeda. This gave rise to what became a transnational, anti-Islamic movement.[11] Prominent activist groups include the English Defence League (EDL), Patriotic Europeans against the Islamization of the West (PEGIDA), Stop Islamization, and Act! For America. While these groups have taken to the streets, the anti-Islamic movement is also an online phenomenon.

Anti-Islamic activists see themselves as part of an ongoing civilizational clash stretching back to the historical strife between Muslim and Christian states, such as the Umayyad invasion of present-day Spain and France in the 8th century, Ottoman conquests of Constantinople in 1453, and the siege of Vienna in 1683. Since they view Islam as a totalitarian ideology that threatens Western civilization, they seek to control and limit the practice of Islam and halt Muslim immigration. Some advocate for expelling all Muslims from Western territories.

While the broader organized anti-Islamic movement, which originated in Western Europe and the United States, is largely non-violent, Islamophobic ideas have motivated some right-wing terrorist attacks, including the terrorist attack on July 22, 2011, in Norway.[16] Outside the West, different varieties of Islamophobia also underpin the implementation of exclusionary policies toward Muslims, such as Hindu nationalism in India,[17] and Buddhist nationalism in Asia, e.g. in Myanmar.[18] The recent drive to curtail Islam in China is another case, primarily through the internment of over a million Muslims from the Uighur minority in the western regions.[19]

Research looking at anti-Muslim and anti-Islamic attitudes at the mass level have generated mixed findings. While surveys indicate that opposition to Muslim immigration and certain anti-Islamic attitudes are widespread,[20] people in secular and liberal societies are on average more tolerant towards Muslim citizens and Islam than people in more religious countries.[21] In these secularized countries, however, people with the strongest anti-Muslim attitudes are found among the non-religious. [22] This intolerance is in part premised on a cultural understanding of liberal‐democratic values,[23] where the explicit rejection of Muslim practices has little to do with Muslims as such but rather with how their practices are perceived to deviate from the norms of society.[24] Relatedly, studies comparing attitudes toward Muslims and Christian conservatives in Western Europe have found comparable levels of prejudice toward both communities.[25] Work zooming in on explicitly Islamophobic, conspiratorial thinking has nevertheless found that a sizable minority harbor such views.[26] Furthermore, Islamophobic attitudes have been found to correlate with certain personality traits such as social dominance orientation.[27] All the above-mentioned conclusions are drawn from so-called WEIRD (Western, Educated, Industrialized, Rich and Democratic) samples. Whether they can be extended beyond the sphere of secularized, liberal democracies is therefore uncertain.

[3] Conway, G. (1997). Islamophobia : a challenge for us all. London, UK: Runnymede Trust. https://www.runnymedetrust.org/companies/17/74/Islamophobia-A-Challenge-for-Us-All.html