Digitalization and democracy: Fake news, disinformation and the EU

This report by Elisabeth Eike examines the EU’s response to fake news and post-truth. The report analyses both the EU’s contributions to the public discourse on fake news, and how it balances upholding liberal values and freedom of expression, and contending with disinformation. 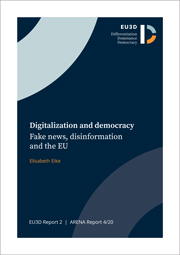 Since 2016, the terms fake news and post-truth have become discursive signifiers of the contemporary international political environment. Concerns that voters base their important political decisions on false information, or even consciously disregard hard scientific facts and objective research has encouraged both academics, politicians and the wider public to debates about the links between media and politics, and disinformation and democracy. In April 2018, the EU responded to such concerns with a new policy for tackling online disinformation. This report sets out to explore how the EU’s policy contributes to current debates and contemporary public discourse around fake news and post-truth. Drawing on the analytical tools of discourse theory, this report examines how the EU understands these phenomena, especially in relation to the liberal democratic principle of freedom of expression. Embedded in this study, is an attempt to map out the discursive struggle to define these phenomena, and how the EU’s understanding of democracy both influen­ces, and is influenced by, these. The report applies a poststructural theoretical framework, arguing that the EU’s effort to tackle online disin­formation is about more than the presence of fake news or ‘alternative facts’. By studying the EU’s construction of these phenomena, as well as causal explanations and actors identified in relation to the current proliferation, this report contributes to our understanding of the EU’s identity as an international actor. The focus is especially on issues raised in relation to the EU’s reputation as a pillar of liberal democracy. Within contemporary post-truth discourses, a representation of online and social media as enablers of disinformation is observed. This representation of democracy is similarly found in the EU’s discourse on online disinfor­mation. The EU’s discourse on disinformation further serves as an argument for the actions taken to tackle the phenomena, specifically for a self-regulatory Code of Practice for online platforms and stakeholders. However, this representation of online platforms as both purveyors and regulators of disinformation is not unproblematic. As the discussion of findings will argue, the principle of freedom of expression is used as both an argument for the EU’s actions and inaction at the same time.

Digitalization and Democracy: Fake News, Disinformation and the EU