ARENA is partner of the Europe-wide academic network PADEMIA, which studies the new challenges that parliaments and citizens across Europe are facing today. 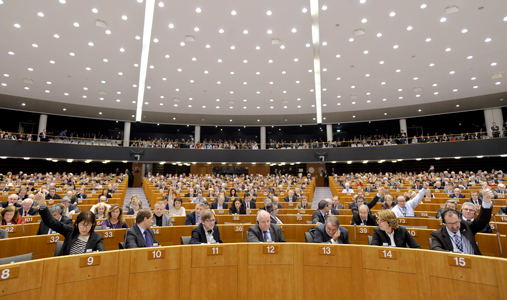 Plenary session of the European Parliament in Brussels (Photo: EU)

PADEMIA is a Europe-wide network of 56 academic institutions from 31 countries to promote research and teaching in reaction to growing European demands to study parliamentary democracy in Europe. PADEMIA seeks to enhance discussion among students, junior and senior researchers, also in exchange with stakeholders, on how to deal with the new challenges that parliaments and citizens across Europe are facing today.

The network responds to the 'Future of Europe' report which identifies '(t)he on-going sovereign debt crisis and the ever accelerating process of globalization (as) an unprecedented dual challenge for Europe'; but also addresses the implications the Lisbon Treaty and further formal agreements (e.g., Fiscal Compact) have for parliamentary democracy in Europe whose complex, multi-level character furthermore requires thorough and comprehensive reflection.

Until September 2016, PADEMIA will organize a number of different events, such as workshops, PhD Schools, and a Guest Lecture Series. Moreover, online lectures, the website, an online paper series, and online tutorials will allow for active digital interaction within the network and beyond. Research, Teaching and Student Awards will help to identify, reward and spread best practices and innovative research in the field.