The euro: no legitimacy without solidarity?

The dissemination event The euro: no legitimacy without solidarity? took place on 25 September 2020 and presented some of the findings from PLATO and their implications to a broad online audience. 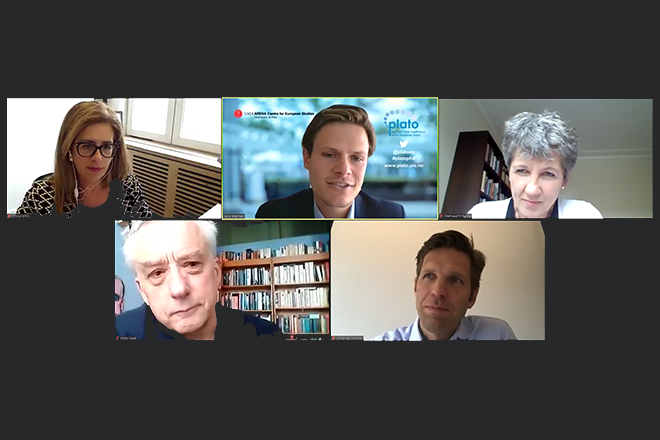 The event gathered academics and practitioners to discuss if a monetary union can work without financial solidarity, and to what extent public opinion allows for solidarity across the Eurozone.

To discuss these questions PLATO invited two prominent commentators: Johannes Lindner, who has worked in the European Central Bank almost since the launch of the euro and who is head of the unit that coordinates the ECB's relations with the EU institutions; and LSE professor in political economy Waltraud Schelkle, who does research on sovereignty, solidarity, and identity in Europe after the 2008 financial crisis. The discussion was diligently moderated by Cinzia Alcidi, Head of Economic Policy Unit at the Centre for European Policy Studies in Brussels.

Does public opinion allow for solidarity?

ARENA's Joris Melman introduced findings from his PhD project on public opinion on the euro. He has conducted a series of focus group studies in different European countries to understand how citizens make sense of the euro and its underlying politics, and how questions of autonomy and solidarity are perceived. Melman finds that national lenses frame how people think about European questions, and that these also feed into their perception of solidarity.

His research also confirms that for most people, Europe is a distant issue. It is difficult to understand the EU and link the pieces together. People are not indifferent, but find it difficult to express a clear opinion. The fact that opinions are unstable and inconsistent leaves space for national elites to shape them. Among Melman's conclusions are that achieving solidarity depends on the stories national elites are willing to tell.

The discussions also touched upon more general questions of solidarity and legitimacy, with PLATO coordinator and ARENA professor Chris Lord providing some general lessons from the project.

Joris Melman is one of 15 early stage researchers who have worked together on the question of whether the EU has experienced a legitimacy crisis.

The overall findings will be available in a forthcoming volume edited by Peter Bursens, Dirk De Bièvre, Chris Lord, and Ramses Wessel, while results and reflections from individual projects are also available through academic publications, the Post-Crisis Democracy in Europe Blog and forthcoming project series with academic reports and policy briefs.

The online format allowed for a broad audience to follow the discussions, with more than 230 registered participants in addition to those following the live stream on YouTube.

A number of relevant questions were raised by the commentators and audience, from the gap between the public's support for the euro and trust in the ECB, communication and the potential for learning, to input and output legitimacy, that is, legitimacy through participation or results.

To illustrate how questions of solidarity come to play and how government stances are shaped by public opinion, Melman referred to the Dutch stance in this summer's heated negotiations on the EU recovery fund, a case which also engaged the audience and panelists.