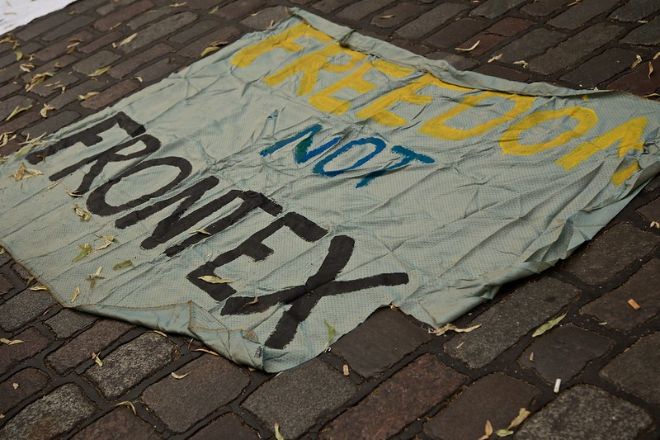 Even though the EU agency Frontex has been heavily criticised, it has gained more power over the last few years. (Photo: MW283 CC BY-SA 2.0)

The European Union has set up more than 40 agencies to perform specific tasks under EU law, such as food safety, defence cooperation, and border control. These agencies are typical examples of independent expert bodies that have an important role in political processes.

The ARENA project 'Democracy and Expert Rule: The Quest for Reflexive Legitimacy' (REFLEX) examines the tension between knowledge and democracy in the European context of decision-making. REFLEX conducts in-depth studies of a selection of depoliticized bodies in the EU multilevel legislative chain.

REFLEX is funded by the Research Council of Norway's FRIPRO Toppforsk scheme and the University of Oslo (2016-2021).

ARENA's REFLEX project sets out to evaluate the legitimacy of these types of depoliticized decision-making bodies, situated at a distance from elected politicians. Trym Nohr Fjørtoft, who is a research fellow on the project, analyses the role and legitimacy of EU agencies. One of his case studies focuses on Frontex, the European Border and Coast Guard Agency. The agency facilitates cooperation between border authorities in each EU country, providing technical support and expertise. He asks whether science and expertise in an agency like Frontex can replace democratic control, and if so, under which conditions.

As a result of the 2015 migration crisis, the legitimacy of the entire Schengen border system was challenged. Critical voices wanted to abandon the common external border altogether, and make border control a purely national matter. In this sense, the very existence of Frontex was at stake, explains Fjørtoft.

Despite this, member states partially redefined Frontex' vocation, and allocated more power to the agency in an attempt to strengthen it, and prevent future crises. As a result, the agency could provide additional technical support for EU countries facing severe migratory pressure.

Fjørtoft explains that the member states accepted that Frontex gained power. In parallel, they took pains to make sure that its actions and evaluations were based on technical and objective criteria. As an example, Fjørtoft brings up that after the crisis, Frontex was for the first time mandated to assess member states' border vulnerabilities. This assessment leans heavily on counting available border guards, equipment and such – and not so much on qualitative evaluations.

Many member states were worried that these new Frontex evaluations could be used politically by the Commission or by Frontex itself. Fjørtoft affirms, however, that they trusted that adopting such a seemingly objective and technical approach would help protect against the political use of the agency.

Bridging the gap between normative and empirical research

Fjørtoft uses both empirical methods and normative political theory to answer his research question. Much of this theory to date has only been applied to institutions of a more technical and scientific nature than Frontex.

Fjørtoft’s project is therefore situated at the intersection of normative theory and empirical political science. His project thus aims to help bridge the gap between the two disciplines.

ARENA Centre for European studies has been a good place to undertake a PhD research project, according to Fjørtoft:

‘ARENA is a rare kind of institution: here, there is a lot of research that connects normative theory and empirically grounded perspectives. It is inspiring to be a part of a truly interdisciplinary environment where one is surrounded by researchers from political science, philosophy, sociology, political communication, and more’.

He deems himself lucky to be part of a research project like REFLEX:

‘Being a PhD fellow can often be lonely, but being part of a project with other researchers has helped give me some direction and a feeling of being part of something bigger’.