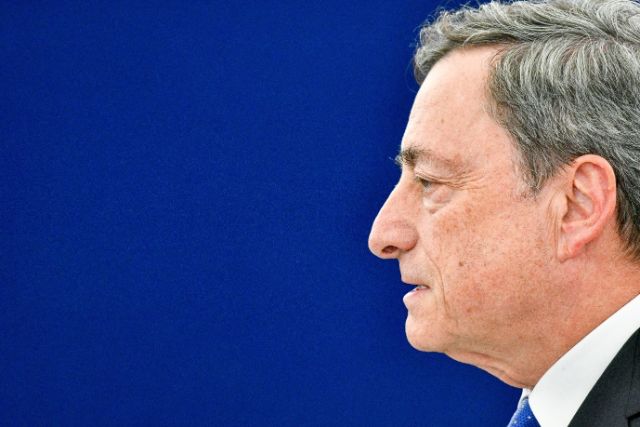 Mario Draghi has been President of the European Central Bank (ECB) since 2011. Photo: European Parliament, 2017 On July 26 2012, ECB-president Mario Draghi made the remarks that became a pivotal moment of the euro crisis:

“Within our mandate, the ECB is ready to do whatever it takes to preserve the euro. And believe me, it will be enough.”

The European Central Bank (ECB), a fundamentally German construction with a high degree of independence and a narrow focus on inflation targeting, thus took on the role as a lender of last resort.

Markets reacted instantly, and a week later Draghi announced a programme known as Outright Monetary Transactions (OMT) intended to buy the bonds of distressed countries. It turned out that the promise was enough to calm investors – the ECB never had to use the programme.

What can decision-makers do?

Together with Cristoph Elhardt of ETH Zurich, Jørgen Bølstad at ARENA has studied how and when national and international actors can preserve the trust of bond markets in times of crisis. Distinguishing between actors’ capacity and willingness to avoid defaults, they argue that the Eurozone debt crisis was marked by a lack of capacity at the national level, and limited or uncertain willingness at the European level.

...they argue that the Eurozone debt crisis was marked by a lack of capacity at the national level, and limited or uncertain willingness at the European level.

Based on a comprehensive new dataset of political events and relevant news, they find that European-level efforts to reassure markets had considerably stronger effects than similar efforts at the national level. Furthermore, national efforts mattered the least in countries with the least capacity.

Bølstad says the role of politics in determining default risk has received little attention in the academic literature, especially when it comes to advanced economies.

– This is an important topic of study, because the crisis had grave consequences for millions of people. Additionally, as is often the case with the EU, actors are repeatedly entering new territory with unintended and unknown consequences.

...they find that European-level efforts to reassure markets had considerably stronger effects than similar efforts at the national level.

Many observers credit Draghi and the ECB with saving the euro through the immediate crisis, but their actions could also turn out to have more lasting effects. According to Bølstad, the Central Bank has taken on a role with far-reaching consequences.

– The EU has been through a process of institutional learning and development that decreases the risk of something like this happening again. The ECB has now taken the power it needs to secure national debt, and its willingness to do so was made increasingly clear over time, Bølstad says.

Because members of the Eurozone issue debt in a currency they have no control over, their ability to guarantee for their debt and preserve the trust of bond markets is dramatically weakened, leaving them more exposed to self-fulfilling liquidity crises. Economic imbalances within the monetary union can no longer be solved by adjusting exchange rates, and national central banks can no longer act as lenders of last resort when governments lose the trust of private investors.

...investors assumed that the debt of Eurozone countries was as secure as that of other countries.

Before the crisis, however, investors assumed that the debt of Eurozone countries was as secure as that of other countries. Bond yields initially converged within the Eurozone, but from 2008/2009, they once again diverged, producing a correlation between national debt burdens and respective yields.

– This kind of correlation is uncommon among developed countries, and was not found among comparable countries outside the Eurozone. This shows the effect of not having the ECB backing national debt at the onset of the crisis.

In this situation, it became less relevant whether or not national actors signalled their intent to make sure debts were repaid. As long as there were doubts regarding their ability to do so, their efforts were largely ignored. The ECB, on the other hand, was seen as both credible and able when it entered the stage in 2012.

– It may be surprising to some that national actions did not matter more. One might think that markets followed the developments closely and adjusted accordingly, especially given the high degree of publicity the negotiations at the EU level got. This result suggests that markets did not believe that the actions of individual countries would matter all that much for what the EU would eventually decide to do, Bølstad says.

It may be surprising to some that national actions did not matter more.

Bølstad’s judgement is that Europe is past the worst part of the crisis and entering into a new normal – albeit one where countries in the south of Europe will have consistently higher unemployment and lower productivity than those in the north. This is also a reflection of the situation prior to the introduction of the Euro, and helps explain why Ireland rebounded so quickly while Greece is still by far the worst off.

– Greece was in the worst shape before the crisis, experienced the worst crisis, and is still struggling the most. Unemployment is falling somewhat and things are looking up, and with time they will enter into a new normal. But their situation will still be worse than for the other members.

Greece was in the worst shape before the crisis, experienced the worst crisis, and is still struggling the most.

This also shows the design failures of the Eurozone. According to Bølstad, it was clear from the beginning that it was not a so-called optimal currency area, even though this was part of the rationale for monetary union (EMU). Among other things, an optimal currency area presupposes similar business cycles across countries and risk sharing through automatic fiscal transfers.

Differences between countries have persisted, and in some cases even increased. As a result, the EU was badly equipped to deal with the crisis once it struck.

Neither of these are present in the EMU. Differences between countries have persisted, and in some cases even increased. As a result, the EU was badly equipped to deal with the crisis once it struck.

– The framework worked well in good times, but it was not designed for large crises involving doubts about countries’ ability to repay their debts. It worked well until things got difficult and it became clear that the EU had not planned for this situation.

However, he also argues that policy-makers are starting to make necessary adjustments – even though observers seem to agree that a budgetary union and more direct transfers is politically unfeasible. The political will for further European integration is weak.

– In the long run, EMU members should become more like regions within a country – although the common budget is likely to remain unusually small. Every country has different regions that work more or less well, with different productivity levels, and so on. There will never be full convergence, so the goal must be to make the Union work well as a collection of different economies, Bølstad says.

There will never be full convergence, so the goal must be to make the Union work well as a collection of different economies.