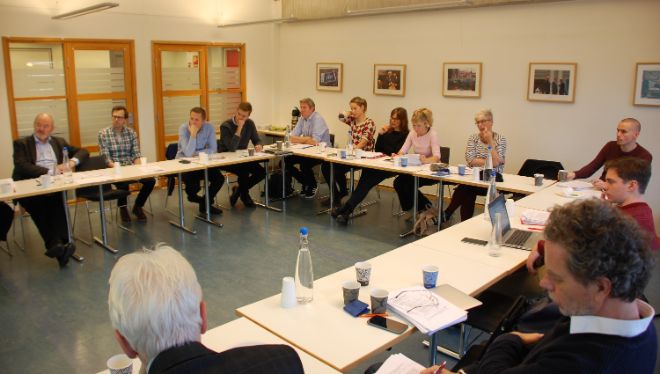 A large number of researchers from around Europe attended the REFLEX workshop at ARENA on 16 and 17 November. Photo: Mads A. Danielsen

A non-majoritarian institution can take many forms. Perhaps the best example is independent central banks that set interest rates and makes other monetary decisions, without the involvement of elected politicians. Agencies is another example. These are structurally detached government organizations that are at an arm’s length from elected politicians, performing tasks ranging from food safety and aviation security to defence cooperation and border control.

A division of labour?

The workshop’s first session was concerned with the democratic legitimacy of expertise and expert bodies. Michelle Everson (Birkbeck School of Law, University of London) argued that “fact” has become a dirty word. She proposed a research project that aims to identify a sustainable and legitimate place for expertise in “post-national” governance.

Jonathan Kuyper (Department of Political Science, University of Oslo) dealt in his paper with the so-called systemic turn within deliberative democracy theory. He proposed a division of labour between experts and politicians: Citizens elect politicians who in turn employ experts. Politicians decide on the policy goals, while experts determine the best means to implement policy and reach those goals.

The second session was devoted to expert accountability. Marija Bartl (Centre for the Study of European Contract Law, University of Amsterdam) joined the proceedings via Skype to present her case study on the institutional politics behind the Transatlantic Trade and Investment Partnership (TTIP). She argued that the type of regulatory cooperation envisioned under TTIP could be far more impactful than acknowledged and potentially change the institutional landscape in both the EU and the US.

Mira Scholten (Utrecht Centre for Regulation and Enforcement in Europe, University of Utrecht) presented a paper that combined law and public administration perspectives in an analysis of accountability in multi-level systems of governance. She argued that the main challenges to accountability in such settings are the dilution of responsibility and the misalignment of scopes.

Finally, Alexander Katsaitis (ARENA) presented a study of parliamentary hearings under the 6th and 7th European Parliament legislature. He argued that there has been a distinct shift in behaviour from the 6th to the 7th legislature – the Parliament’s ECON committee has increased its amount of public hearings manifold while decreasing its interactions with national parliaments. This could, in the wake of the financial crisis, be an attempt to increase the Parliament’s democratic legitimacy.

Friday opened with a section of theoretical papers. Torbjørn Gundersen (Center for the Study of Professions, Oslo University College) presented his study of Norwegian members of the UN climate panel IPCC, discussing how climate scientists view their role as value-free experts. He argued that the value-free ideal is strong among these scientists – not necessarily out of a concern for scientific bias, but rather out of a concern for public credibility and trust in their findings.

Anders Molander (Center for the Study of Professions, Oslo University College) mapped out 10 arguments against the use of expertise in democracy and highlighted how and where they fall short. Together with his co-author Cathrine Holst, he argued that epistocracy and democracy are not conflicting categories.

Erik O. Eriksen (ARENA) presented a broader framework for thinking about non-majoritarian institutions. He walked through different strategies for holding experts accountable and pointed out how the existing alternatives fail. Eriksen then proposed his own alternative, the epistemic public strategy, in which experts are analyzed not as value-free and neutral but rather as representatives of different interests.

A mix of empirical and theoretical work was on the agenda for Friday afternoon. Andreas Eriksen (ARENA) described different models of expert legitimacy and presented his own model. Labeled the public reason model, his preferred approach hinges on the concept of reasonable acceptability. Responsiveness to policy ends is structured by a mandate – and fidelity to a mandate requires “political literacy.”

Eva Krick (ARENA) had the honour of rounding up the workshop with her paper on two German policy advisory committees: The dialogue on the climate protection plan and the final storage committee. She argued that the final storage committee has been surprisingly successful along a range of indicators, in part due to having plenty of time, a strong joint commitment, and an intelligent setup and leadership.

This workshop was the first workshop of the REFLEX project, which aims to evaluate the legitimacy of non-majoritarian bodies in the specific case of European Union agencies. The project is coordinated by ARENA’s Erik O. Eriksen and will end in 2021.