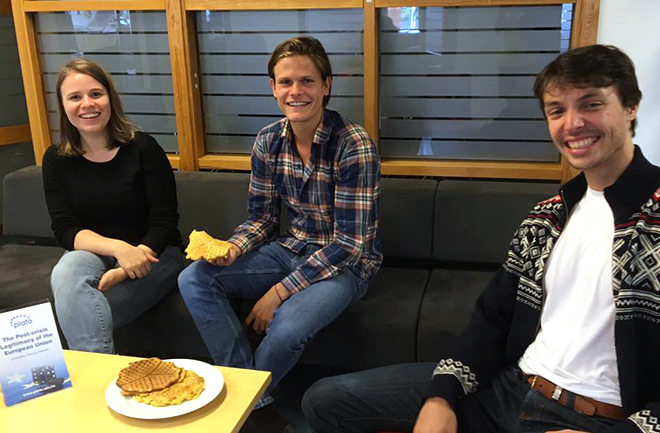 The European Union has been through a rough decade. After the financial crisis in 2008, EU governments poured 4.5 trillion taxpayer Euros into European banks to rescue them from a crisis that the banks to a large part had brought upon themselves.

Since then, the EU has experienced a migration crisis and a crisis in its relations with Russia – and it received a huge blow when the United Kingdom voted to leave the Union. Now, a team of researchers from all over Europe sets out to investigate: Has this barrage of crises also contributed to creating a deeper legitimacy crisis in the EU?

Legitimacy means the justified or rightful exercise of political power. It is what causes us to do as we are told by our governments, even when nobody is forcing us.

‘It is one thing to claim that the EU has suffered a crisis, or even a whole plague of them. It is another to demonstrate that it has suffered a legitimation crisis, or, in other words, a crisis that calls into question the very justifiability of the Union as a form of political power,’ PLATO coordinator Chris Lord explains.

What follows a legitimacy crisis?

PLATO is a network that brings together 15 PhD researchers at nine European institutions to analyse that research question from different angles. ARENA is the coordinating institution, with Lord and project manager Marit Eldholm at the helm.

It is one thing to claim that the EU has suffered a crisis, or even a whole plague of them. It is another to demonstrate that it has suffered a legitimation crisis that calls into question the very justifiability of the Union as a form of political power.

Three of the PhD candidates were recently employed at ARENA: Claire Godet, Joris Melman and Jan Pesl. Godet explains that the project finds its theoretical starting point with German social theorist Jürgen Habermas, who has proposed how a financial crisis might turn into a legitimacy crisis.

Melman emphasizes that the EU has long been struggling with a democratic deficit. This might not be too problematic if the EU has more of a technical function, but ‘over time, the EU project became increasingly political. And this opened up for more legitimacy concerns,’ he explains.

While existing theory often takes the nation-state as its point of departure, the European crises require different thinking. The EU needs to be legitimate with both member states and citizens, and existing theories of legitimacy need to be adjusted to this reality. Each PhD will contribute to PLATO's theory-building with a different perspective.

Melman has a background in political science and philosophy. He has moved to Norway from the Netherlands to assess the legitimacy of the EU’s response to the financial crisis – for instance the massive bailouts that EU governments paid out to banks.

‘I will undertake both a normative analysis of the legitimacy of the responses and an empirical analysis of the public opinion about them,’ he said. He will use focus groups in different countries to find out how citizens feel about the EU’s crisis-response measures.

‘I want to understand if the crisis affected policy processes. I will be process-tracing the negotiation process from 2001 until now, to understand if the actors used the democratic deficit of the EU against the EU – or whether the EU tried to legitimate itself in the carbon market.’

Pesl brings in a sociologist's perspective. His focus is not so much on the normative theoretical approach: ‘I'm more interested in legitimacy on the streets’.

He will examine whether European citizens are able to formulate a critique of the EU that is more than just a diffuse euroscepticism. To do this, the Czech PhD researcher will develop a computer model to analyse media debates in several European countries from the financial crisis up until now.

The PLATO project is a so-called Innovative Training Network (ITN). These are EU-funded research and training networks that bring together partners from different countries and sectors to train young researchers. One aim is to increase the employability of individual researchers, across borders and sectors. Another aspect of ITNs is the nature of collaborative research.

You’re not just sitting in a cellar writing a dissertation that ends up in a drawer.

This means that the 15 PhDs will not just stay in one academic institution for several years and write a dissertation. All candidates will exchange to another partner university for three months – and the candidates will meet at PLATO PhD schools organised in several European cities.

‘You’re not just sitting in a cellar writing a dissertation that ends up in a drawer,’ Melman says. ‘Being part of a project like this makes you more part of the playing field.’

Godet adds: ‘I like that the project is so international. We can travel basically wherever we want. And we are not alone – we are part of a common project.’

'For such projects, teamwork is of the essence', project manager Eldholm emphasizes. 'We need to train researchers who are able to connect and work with others to jointly reach the project's high ambitions. This is why teambuilding will have a prominent place at the upcoming kick-off meeting'.

Although coordinator Lord doubts that this collaborative way of doing PhDs will replace the standard model in the social sciences of individual PhDs, he maintains that the model has a role to play alongside traditional individual PhD projects:

‘Social scientists also need to be able to do cumulative research and to divide labours. Indeed PLATO is a nice example of just that. Each PhD researcher has his or her own case study. Yet, taken together, the 15 projects will allow PLATO to use multiple case studies to investigate whether the EU experienced a legitimation crisis as a result of the financial crisis.’

What do PhD candidates get through PLATO that they wouldn’t get through a ‘traditional’ PhD programme?

‘Frankly, it is a trade-off. Students have to define their PhD research within the parameters of projects that are defined by the network. But, if they are happy to do that, they get at least three huge advantages,’ Lord asserts.

‘First, students are not just solitary researchers working on some narrowly defined question. They work together as a team on some large problem at the research horizon of their discipline.’

Pesl agrees that the scope of the PLATO project is larger than what would be possible for an individual PhD. ‘The potential for impact is bigger as part of this project,’ he states.

The second advantage highlighted by Lord is that students get access to co-supervision and research expertise from universities in several European countries.

‘Third,’ he says, ‘students have short research-intensive work placements. The latter reflects an important development. In a knowledge economy and society, it is not only universities which need people who have the research skills that can only come from doing PhD research.’

Indeed, when asked about their long-term career goals, both Godet and Melman hold all opportunities open. ‘Academia is appealing, but can also be cruel,’ Godet says. To Melman, undertaking a PhD was never ‘the one thing’ he just had to do. He worked in a tech startup before moving to Oslo but realised that he wanted to work closer to his field of study.

While the PLATO project aims at educating highly qualified researchers, it takes into account that many with doctoral degrees today end up outside of academia.

‘The overall goal of the project is not only to make more professors,’ Godet says.

Melman agrees: ‘The project is a broad mix of different types of institutions and different disciplines. It can really contribute to society.’