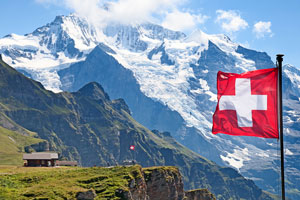 Like Norway, Switzerland is experiencing an extensive Europeanization, the book concludes (photo: colourbox.com)

The European Economic Area (EEA) Agreement, which makes Norway a close associate to the European Union, is intensely debated. Several are of the opinion that Norway would be better off by terminating the agreement and rather conclude a free-trade agreement with the EU. A new book gives reason to question whether this would be possible in light of the EU's development, and not least, if the Swiss option would be any better in terms of democracy and self-determination.

The book analyzes the various forms of association that countries which do not want or qualify for full EU membership have with the European Union. It examines Norway’s association with the EU through the EEA Agreement and the consequences this has for democracy and self-determination. The book also goes in depth on Switzerland's bilateral agreements with the EU. In Norway such arrangements are often voiced as an alternative to the EEA Agreement. The breadth of alternative forms of association are closely investigated, and separate chapters on Iceland and Britain look at their special relationship with the EU.

Sovereignty lost regardless of agreement type

The book's main finding is that countries that are not EU members, but still closely associated with the EU, are increasingly experiencing a loss of sovereignty. This happens regardless of the type of affiliation. If a country has bilateral agreements with the EU (Switzerland) or is affiliated through the dynamic EEA Agreement (Norway, Iceland) does not make any significant difference: the implications for self-determination are the same.

The EU has no less influence on Switzerland than on the EEA countries, the editors Erik O. Eriksen and John Erik Fossum conclude. The loss of sovereignty is not compensated for through participation, as it is for EU member states which are represented in the various EU decision-making bodies, they write. These countries have voluntarily subjected themselves to EU dominance. This means that they are living under a hegemony which is not imposed on them from outside, but as a consequence of being integrated into a polity that is constantly changing and over which they have no influence.

Switzerland not a good model

The book examines the complex of EU-Switzerland agreements, consisting of around 120 bilateral agreements, and how they work in practice. The upshot is that Switzerland is experiencing similar problems of self-determination and democracy as the EEA-affiliated Norway. Switzerland experiences a comprehensive legal adaptation to EU legislation. Just like Norway, Switzerland is increasingly Europeanized, despite the non-dynamism of agreements and the limited sectors they cover, the Geneva-based researchers Sandra Lavenex and René Schwok write. Although this EU adaptation is voluntary, the structure has a strong in-built pressure which makes the adjustment much more dynamic in practice than it may formally appear to be, they claim.

The agreements were never intended as a permanent form of association with the EU, the Swiss scholars remind, but as a temporary solution after the Swiss voted no to the EEA Agreement in 1992. For almost a decade, the EU has been pushing for Switzerland to agree to either the EEA Agreement or full EU membership. The union does not want to give Switzerland a competitive advantage on the EU’s internal market. Top EU and Swiss diplomats have for several years worked intensively to adjust the framework in order to make Swiss EU adaptation more automatic, the book reveals.

Lucerne professor Joachim Blatter writes that the country's particular state form and its bilateral relations with the EU are so unique that it would be difficult to copy. He moreover points to a tension that has emerged due to Switzerland’s ‘strong opposition to intervention from neighboring countries and international organizations combined with an extreme opportunism in the face of demands of multinational companies’.

The EU has different types of agreements with its neighboring countries. Some countries seek economic integration and access to the EU internal market, although they do not qualify for full membership. Professor Sieglinde Gstöhl, who is from Liechtenstein, provides a lucid overview of the EU’s various agreements with neighboring countries by the Mediterranean and in the East, as well as European microstates. She writes that the numerous agreements have become increasingly complex as integration covers an increasing number of sectors. To the EU, the dynamic EEA is the benchmark model and held to be the second-best option after full membership, she writes.

What about the UK?

The Brits are to hold a referendum on their EU membership. Many EU critics have realized that both the EEA Agreement and Switzerland's form of association are unfavorable from a sovereignty perspective. For the ‘Brexiters’ who argue in favour of increased sovereignty, ARENA Professor Christopher Lord writes that the only option would be to stay completely outside the EU. The UK's association with the EU would then have to be governed by a bilateral trade agreement, equivalent to any other agreement Britain has with third countries – with the consequences this may have for the country's economy and foreign policy.

On Monday 26 October at 19.30 the debate Will Britain end up like Norway? will be held at the House of Literature in Oslo. ARENA professors Christopher Lord and John Erik Fossum will discuss some of the book's findings, with particular emphasis on the implications they may have for the current British debate.

Will Britain end up like Norway?
Litteraturhuset (Kjelleren)
26 October at 19.30