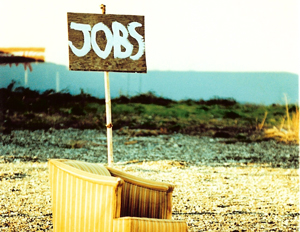 What does it mean to be an EU citizen in times of crisis, and how aware are labour migrants of their rights as EU citizens? How do they experience moving to and living in Norway, and how are they received?

These questions guide the project The European crisis and the citizens and were discussed at a public debate on 5 December 2013. Espen D. H. Olsen and Asimina Michailidou presented their research to a large audience at the House of Literature in Oslo, consisting of trade unions and employer’s organisations, EU migrants and diplomatic missions, journalists, academia and students, politicians and ministries, civil society organisations and think tanks.

The human face of the crisis

The number of EU citizens migrating to other European countries has risen considerably since the outbreak of the financial crisis in 2008. The project investigates the experiences of EU migrants in Norway, as well as what they know about their rights. Rather than focusing on numbers, the researchers look into the human face of the crisis.

Norway is seen as a prosperous country, Espen D. H. Olsen emphasized. But the expectations are often too high, and the migrants experience difficulties in becoming integrated in the Norwegian labour market. Based on interviews with state officials and civil society who meet with migrants on a daily basis, he pointed to some even being exploited by employers in this vulnerable phase. 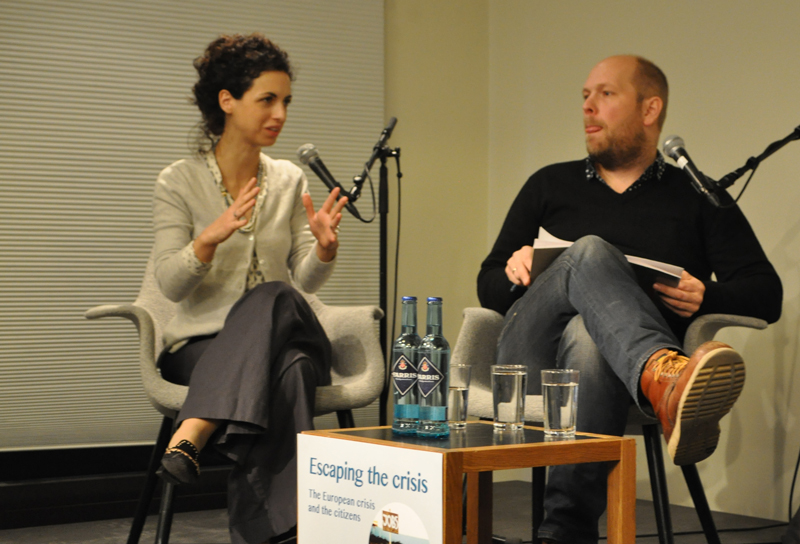 - EU migrants prove to be a difficult category for state agencies such as NAV (the Norwegian Labour and Welfare Administration), Olsen further claimed. EU citizens can travel freely; they need no permission, visa or prior commitment to come to the EEA country Norway. But they do encounter language problems, and they have no right to language education as opposed to e.g. refugees. Many also find the Norwegian system difficult to navigate.

- A lot of information is available from state authorities as to what to do, their rights, where to go etc., Asimina Michailidou explained. - But when meeting with state officials in person, many either get contradictory information, or not very helpful attitudes.

Migrants leave their jobs to come to Norway

Among the most surprising findings, in Michailidou’s view, was that most of the migrants were actually employed in their home country when deciding to come to Norway. She explained this with the situation in some Southern European countries being so bad that many people are not paid for their job, or at least not enough to survive.

The study further reveals that people do not really think about the fact that their EU citizenship is what enables them to move freely. Although most people are aware of their EU rights to free movement and to look for a job, not everyone is aware of this. More worrying to Michailidou, however, is that not everyone is aware of her/his rights to protection, such as welfare and health services, as well as the right to establish a business.

Another component of the study is an analysis of how Norwegian media portray EU migrants. Here, the researchers found that it is not the media but political parties who drive the agenda, focusing on the economic consequences of migration. Articles often have sensationalist news titles such as how EU migrants exploit the Norwegian system or how the welfare system may collapse. At the same time, the benefits for the economy of extra workforce are also acknowledged. Michailidou concluded that the human factor is missing when the media discusses EU labour migration to Norway.

Migrants from the East vs. South

Senior researcher at Fafo, Line Eldring, appreciated the focus on the financial crisis in Europe, which in her view has been seriously overlooked in the Norwegian debate. She then drew the attention to labour migration to Norway since the EU enlargement in 2004, pointing to the fact that migration has been, and still is, much higher from Eastern Europe than from Southern Europe. Although the percentage increase from the latter countries has been huge since 2008, the group of migrants is still much smaller than the one coming from the ten Eastern European countries becoming EU members in 2004 and 2007. She also raised the point that Norway not being en EU member might affect the migrants’ knowledge about their rights as EU citizens. 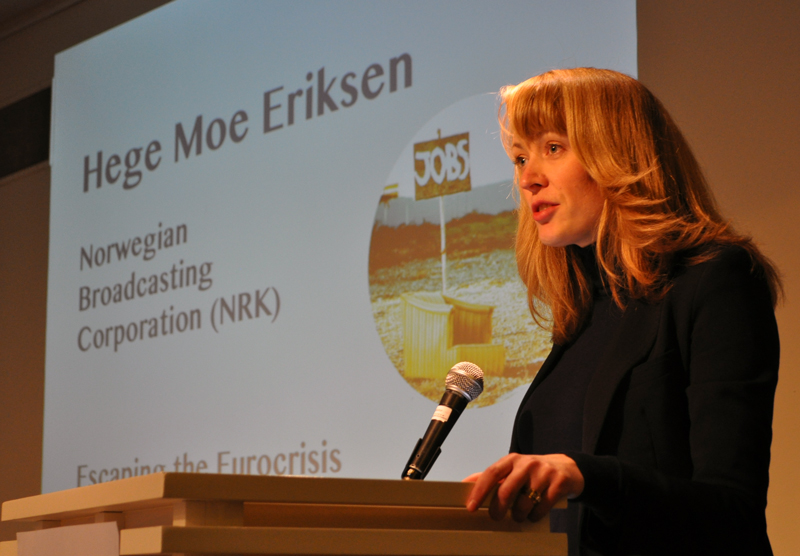 Europe correspondent for the Norwegian Broadcasting (NRK) for the last three years, Hege Moe Eriksen, painted a bleak picture of the current situation. During her time as a reporter she travelled across an EU in continuous crisis. – It has shook the continent like a series of earthquakes, spreading from country to country, and its force has been devastating for thousands of families.

– Young people in Southern Europe are no longer seen as a progress for their country. They are the first generation in modern times who are seen as a step backwards. Day by day, they are slowly becoming the lost generation that we so much fear.

She asked if we are really capable of grasping the seriousness of the problems, the alarmingly high figures that Europe has never seen alike. In Greece and Spain, more than every fourth worker is unemployed, and youth unemployment is as high as 55 per cent. And the problem is not only one of extreme numbers, she emphasized, but also of persistency. – Many thousands have stopped looking for a job. Hundreds of thousands have lost their unemployment allowances and are now on social welfare. I know a lot of people who are really struggling just to survive in Southern Europe.

In the long term, Eriksen concluded, the brain drain from crisis-struck countries can be devastating for countries, which are in need of innovation to make a path forward.

Morten Stensberg, leader of Caritas’ infocentre for labour migrants in Oslo, daily meets some of the people trying to create a new future in Norway. He started by asking why not many more people are coming to Norway.

Nearly 50 per cent of those coming to Caritas are on the move from the European crisis. Many are labour immigrants from e.g. Northern Africa and Latin America who tried to settle in the EU before the crisis hit in 2008. His experience is that immigrants do not come to benefit from the Norwegian welfare system; they are truly looking for work. But often what they think they know about Norway is more hearsay with minimal information. Caritas helps them to come to terms with how the labour market functions.

- There seems to be developing an underground economy driven on broken illusions. This is one of the backsides of the immigration that must be dealt with in a proper manner.

Caritas meets people with bad contracts, bad housing conditions, and who are not being paid the wages they have been promised. Many of those coming, especially from Southern Europe, are more vulnerable than those from Eastern Europe, he concluded, as they do not come because we need them, but because they need us to create a better future.

The theme sparked a lot of debate. The questions asked by the audience displayed a variety of views and engaged the five panelists in discussions on the gravity and seriousness of the crisis, the comparability of groups and the experiences of migrants in Norway.

Survey among EU migrants in Norway (353 respondents with 25 nationalities, around 50 % from Greece, Italy, and Spain) 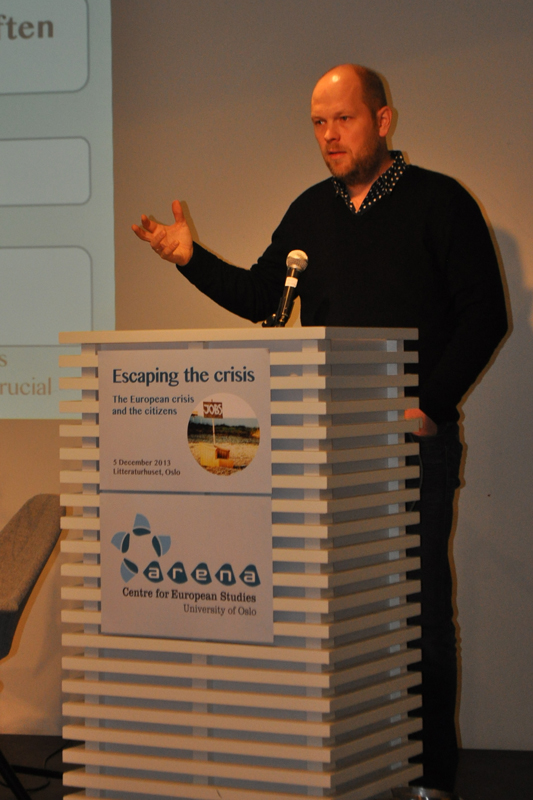 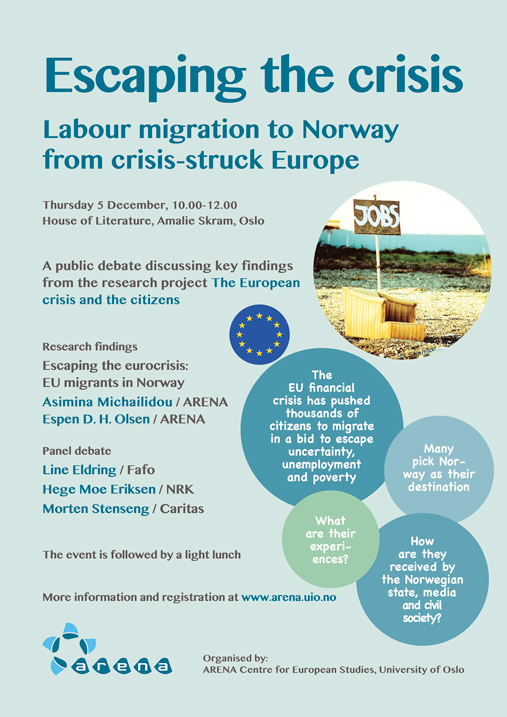