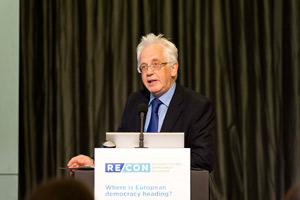 This is a presentation Erik O. Eriksen gave at the RECON outreach seminar ‘Where is European democracy heading?’. The conference presented key findings from the 5-year long research project, which focuses on the conditions for democracy in the multilevel constellation that makes up the EU.

Held in Brussels 19 May 2011, the conference was targeted at stakeholders: policy makers, journalists, interest groups, civil society actors, other European research projects as well as the academic community and the general public.

Why are we today, once again raising the issue of EU democracy; in these days of financial crisis, of lack of concerted action and solidarity, when there is struggle over what to do with regard to Greece, with regard to Libya and Syria for that matter; when the steam has gone out of the constitutional project; when Schengen is on the brink of collapsing. Is not the talk of democracy just a luxury that we can not afford? After all politics is about solving problems and delivering. This is what people require, say the technocrats. Why bother with democracy when there is little interest in the media and political elite, one may add.

One should bother because it is not the economy, stupid, as Clinton countered Bush, but it is democracy! Democratic forms of rule on average produce better results than known alternatives. Further, at the bottom of all the crisis and political disasters lie the question of justification: why should we suffer from others mismanagement, why should we pay for others recklessness and misbehavior. People require answers and they require that the rules they are supposed to abide by, are abided by those in power. Only a system of democratic rule can ensure compliance and accountability. Moreover, the integration process proceeds even in times of crises, or maybe in particular then. If the EU had not existed it would have to be invented! Citizens and states all over Europe (and beyond) are deeply interwoven and affect each others’ well-being and freedom in profound ways. The financial situation of Greece is all Europeans’ problem. (Even for Norway who has placed one fourth of its pensions funds in European bonds). We are all affected, and we all have to suffer the consequences of mismanagement. Hence, we should all have the possibility to partake. According to the democratic credo of Thomas Paine: there should be no taxation without representation.

The EU is replete with successes but in later years even more with disasters. The situation has changed dramatically from when the RECON project was conceived in 2005. We may ask what the status for democracy really is in Europe, and also for the Union, when we look at the situation in Greece, in Hungary, in Italy, to take the most obvious cases.

In the RECON project we have dwelled into the many dimensions of democratic rule. Our research ranges from constitutional and representative matters, via the institutional make up for collective decision-making, to the role of media and public debate in civil society. Up-stream, as well as down-stream processes have been analysed, and the question of gender justice, of gender democracy, of collective identities, of foreign policy and also aspects of the political economy of the Union have been addressed.

We have addressed the concept of democracy and why the EU should be democratic. One answer, in addition to the one mentioned, is that democracy is a claim of justice. No political order can be just, if it is undemocratic. Another is that European integration takes place among already democratic states. Why should European citizens expect less from Europe, than from their nation state? But can there be democracy beyond the nation state, and in that case: which democracy for Europe?

The point of departure is that there is a democratic deficit in the EU, and we have asked how democracy could be reconstituted. Which direction must the reform-process then take? To that purpose we have worked out three ideal typical models for democracy – for how Europe could be democratic:

Snapshots from our research

This is a comprehensive project and it is one that has lasted for almost five years. Partners come from all over Europe, and also from New Zealand. We will present some snapshots from our research so far; but first of all Angela Liberatore from DG Research in the European Commission will give an introduction. Following this, John Erik Fossum from ARENA will discuss the constitutional future for Europe. Then Christopher Lord, also from ARENA, will talk about European representative democracy. Pieter de Wilde, formerly ARENA now the Social Science Research Center in Berlin will then present his research on media debates about the European project. Following this, Aleksandra Maatsch from The Jean Monnet Centre for European Studies at the University of Bremen will discuss new patterns of so-called Europscepticism. Lastly, Justine Lacroix from the Université Libre in Brussels will give a presentation on the debate on Europe among intellectuals. Before we take a coffee break, Member of the European Parliament Andrew Duff, and Lisbeth Kirk the Editor-in-Chief, at the EUobserver will sum up the session.

After the break Helene Sjursen will discuss democracy issues in security governance. Then Sara Clavero from the Center for the Advancement of Women in Politics at Queen's University in Belfast will talk about gender democracy in Europe. After that Agustín J. Menéndez from ARENA and University of León will discuss the constitutional roots of the financial crisis. Last, Christian Joerges from the Center of European Law and Politics at the University of Bremen and Karolina Zurek from the Swedish Institute for European Policy Studies will present their research on international trade and European law. Then we have invited Theofanis Christoforou from the European Commission Legal Service to give his comments on the session. Towards the end of the morning we will open the floor for a discussion of the issues at hand.