Understanding ‘reciprocal radicalisation’ as a component of wider conflict dynamics

Joel Busher and Graham Macklin identifies a number of issues that needs to be addressed for the concepts of ‘reciprocal radicalisation’ and ‘cumulative extremism’ to add value. 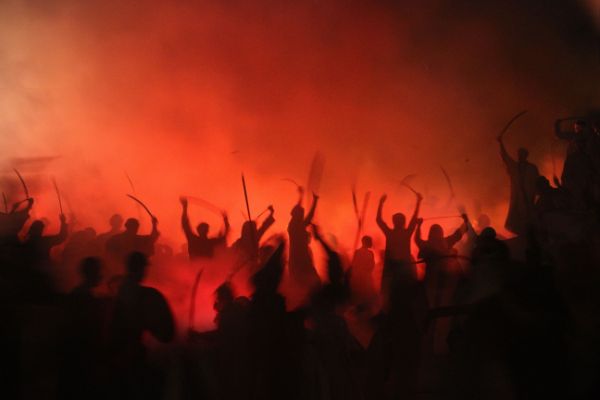 The last time that the concepts of ‘reciprocal radicalisation’ and ‘cumulative extremism’ were a focus of attention for policymakers, practitioners and academics, we wrote two articles in which we sought to adopt the position of ‘critical friends’ (Busher & Macklin 2015; Macklin & Busher 2015). We saw a number of possibilities in these concepts. We welcomed in particular the way that they encouraged analysis of the interactions between opposing groups – something that social movement researchers have long argued is essential if we are to explain patterns of mobilisation and political violence (e.g. della Porta 1995).

We also identified a number of issues that needed to be addressed if these concepts were to add value, however. Foremost among these were:

In this very short article we focus on the third of these issues. Specifically, we trace out what we believe to be a potentially fruitful avenue for addressing this issue.

Getting to grips with the relational complexity of conflict dynamics

If we think for a moment about almost any instance of political aggression or radicalisation, it quickly becomes clear that we are dealing with a complex network of relationships. The most basic contest imaginable that might be described as ‘reciprocal radicalisation’ is one comprising of two opposing groups. If we assume that state actors also play a role, and that the two opposing groups make appeals to some form of nominal public, we have at least four sets of actors already, each of whom will be engaging in some way with one another and also attempting to influence the relationships between the other actors e.g. opposing groups are likely to be seeking to discredit one another in the eyes of the wider public and are likely also to be seeking to encourage the state to intervene against their opponents; while the state is likely to be attempting to undermine both groups in the eyes of the public.

Of course, such a simple conflict model almost never exists because (a) either those groups are part of a wider movement characterised by varying interests and objectives or there are competing factions within the two opposing groups; (b) the ‘public’ is never straightforwardly ‘general’ but rather consists of multiple segments such that the opposing groups and state actors are in fact engaged with, and usually have to prioritise engagement with, those audiences identified as being most relevant to their cause and to that of their opponents; (c) the state is not a homogeneous entity: activists’ interactions with the security forces are not the same as, and are likely to follow a different logic from, their interactions with elected representatives (at least within a democratic state); and (d) there are often more than two opposing movements e.g. radical right groups in contemporary Europe are not only entrained in competition against extreme Islamist groups but also against an array of left-wing groups. Each of these different actors might take action directly against any of the other actors or might seek to influence the way that two of the other actors interact with one another.

As such, while we might acknowledge the need to situate reciprocal radicalisation within a wider set of conflict dynamics, the relational complexity can quickly seem overwhelming. We believe however that recent work on the Dynamics of Radicalization (Alimi, Demetriou & Bosi 2015) offers a way of working through this complexity in a manner that is not overly reductive.

Alimi and colleagues propose that we think of the relational dynamics of radicalisation as operating across five ‘arenas’, in each of which they identify mechanisms that appear to be particularly prominent in processes of conflict escalation. These arenas are:

Second, conceiving of ‘reciprocal radicalisation’ as one element of a wider process of what we would call ‘interactive escalation’ (Macklin & Busher 2015) enables us to ask and attempt to answer questions that should be at the forefront of our minds if we are serious about unpicking how conflicts escalate and de-escalate:

In the context of this short discussion, it is relevant to observe that Alimi and colleagues argue that Arenas 4 and 5 are less likely to “engender processes of radicalization” (2015: 50) – to be the arenas out of which radicalisation dynamics initially emerge – than Arenas 1, 2 or 3.

This briefing was one of several delivered as part of a CREST Workshop on Reciprocal Radicalisation. Papers and discussion during the day included interactive escalation of rhetoric and violence between extremist groups, signs and causal factors, the impact of the state, mainstream and social media, and potential opportunities for intervention. The full CREST report, by Kim Knott, Ben Lee and Simon Copeland, gives an overview of the discussions and can be downloaded, free here.

Bartlett J, & Birdwell J (2013) Cumulative Radicalisation between the Far-Right and Islamist Groups in the UK: A Review of Evidence. London: Demos.