In February 2015, the Counterterrorism and Security Act was passed by the UK Parliament. The Act imposed a legal duty on several public bodies, including higher education institutions (HEIs), to “have due regard to prevent people from being drawn into terrorism”, a requirement referred to as the Prevent Duty.

Screenshot from the Prevent e-learning package by the Home Office

To comply with the legislation, HEIs must develop systems and policies (covering such matters as information technology and external speakers) to tackle the propagation of extremism or ideas that might push students towards terrorism. Within this framework are hierarchies of reporting which can lead to the referral of an individual to the voluntary multi-agency Channel programme, which “supports people who are vulnerable to radicalisation”.

Critics of PREVENT, the UK’s counter-radicalisation policy, and the Prevent Duty in HEIs warn of a “chilling effect” on free speech, as well as the stigmatisation of Muslim students, given that PREVENT has always centred on Islamic extremism even as its remit expanded to include the far-right. High profile incidents such as the 2008 arrest of Rizwaan Sabir, a postgraduate at the University of Nottingham, for downloading a freely available Al-Qaeda training manual for research purposes, had already raised anxiety levels.

The Act has not led to more arrests, but the recent furore over revelations that the University of Reading had applied Prevent Duty procedures to guide students who were accessing an article on revolution by socialist academic Norman Geras exemplify the nature of this perceived threat. However, while a story such as this suggests that the chilling effect of 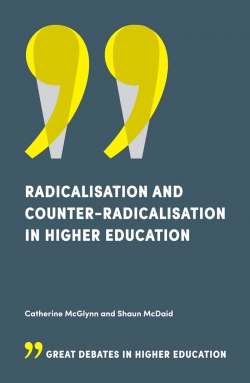 PREVENT is taking place on campus, coverage of individual incidents don’t tell us how HEIs have implemented the Prevent Duty on a day to day basis, or how it has impacted on the experiences of both staff and students in these institutions. Such questions lie at the heart of our recent book, Radicalisation and Counter-Radicalisation in Higher Education.

We were already conducting research on how staff and students negotiate controversial discussions about terrorism when the Act was gestating, and decided to combine our planned focus groups with staff and students with observing the policy response of English HEIs through open source documentation. We limited our focus to England, reflecting the Anglo-centric nature of PREVENT and the Prevent Duty, which does not apply in Northern Ireland. Thus, we were studying universities where students currently pay the highest fees of any state system (fees are waived or heavily subsidised elsewhere in the UK), a policy that has seen a growing emphasis on students as customers seeking value-for-money.

It would seem logical to assume that the greatest impact of the Prevent Duty would be on universities’ ability to balance their legal obligations against defending what higher education leaders noted in a letter to The Times was the “unique status of universities as places where lawful ideas can be voiced and debated without fear of reprisal”. However, our research found that, overall, there was little evidence of the feared chilling effect and that universities are standing up fairly well in their role as places of open debate.

Vetting policies are bureaucratic but usually clear and logical, and policies on researching extremism have mostly been designed to support and protect both investigators and subjects. In discussions with staff and students, the concerns that were raised about discussing terrorism and political violence were often about how what was said would impact upon others. This was not about the clichéd ‘snowflake generation’ getting hung up about the causing or taking of offence either, rather a genuine desire that unspoken rules of courtesy and mutual respect should be in play if debate was to be free and meaningful.

However, what is clear is that the policy itself, and the theory that underpins it, is potentially damaging both to community cohesion and the credibility of the UK’s counter-terrorism strategy as a whole. The basis for this lies in the “science” of UK counter-radicalisation. This comes from Extremism Risk Guidance 22+, a set of guidelines for identifying those at risk, drawn from a small study of prisoners held on extremism-related offences in the UK. The guidelines are controversial, because information about their formulation and use was initially opaque, and because very limited sample it was based on has been accepted so uncritically by policy makers.

As PREVENT has expanded to the threat of non-violent extremism and required the monitoring of those who aren’t criminals, the framework inspired by ERG22+ has transmuted into a formula identifying those vulnerable to radicalisation. Prevent Duty training packages are steeped in images of the grooming of the vulnerable and the language of child sexual exploitation. This emphasis has helped universities accommodate the Duty as a safeguarding issue that applies to all students regardless of racial or religious background.

This seems benign, even positive, as the student body has become more numerous and diverse. However, in swallowing the vulnerability model and its shaky evidence base wholesale, universities are not making use of the critical faculties in which their staff are meant to excel. And they are falling prey to what Kathryn Ecclestone pithily calls “vulnerability creep” by integrating the Prevent Duty into existing safeguarding policies. In the long-run, it is unlikely that students will benefit from further erosion of their agency as they seek the challenging and well-paid employment that the value-for-money language surrounding contemporary English higher education claims will be their due.

Of all the predictions made about the Prevent Duty, Bill Durodie’s vision of a minimalist audit approach which would enable universities to show compliance is the one that has come to pass. The Counterterrorism and Security Act has not initiated an Orwellian nightmare for universities, but the Prevent Duty has been damaging to higher education – just not in the way many expected. If universities aren’t convinced that quiet compliance through burying the problem in safeguarding protocols is a problem, they may wish to consider reactions to future attacks. The recent PREVENT review reported that over a third of British nationals convicted of Islamist offences had attended a higher education institution. Since more than forty percent of 18-year-olds in England spend some time studying for a degree, it is likely that more terrorist acts will be perpetrated by students and graduates. If universities think that their policy of treating those who exhibit interest in extremist ideas as vulnerable victims will remove media and government excoriation when a former student presses the detonator, they may well be in for a rude shock.