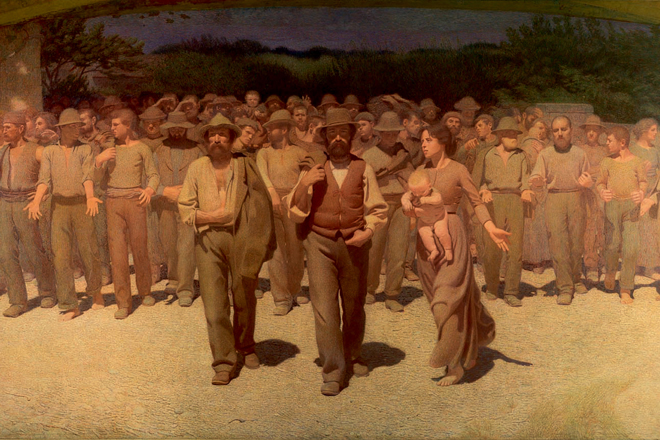 'The Fourth Estate' by Giuseppe Pellizza da Volpedo portrays a workers' strike, which represents a social and political force whose influence is not formally recognized (Photo: Wikipedia)

In the words of Altiero Spinelli, one of the EU founding fathers, 'If the European humanist tradition - which is the secret and powerful core of the entire Community structure - means anything at all, it is that for us today economic and industrial development must be harnessed in the service of human and social needs, and not vice versa. That good living must not be considered as an instrument for increasing production and power, but that growth must serve the good life'. 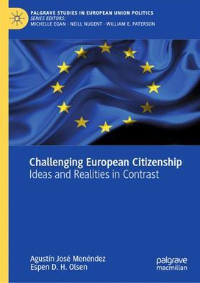 Olsen and Menéndez analyse the development of citizenship in Europe since the foundation of the Communities. They criticize the way in which European citizenship is imagined and practiced.

In 1992, members of the European Union signed the Treaty of Maastricht. The Treaty was meant to usher in a new era of European integration. The euro was created, people were optimistic.

From social to market citizenship

But is this in fact a form of citizenship? Espen D. H. Olsen and Agustín José Menéndez, researchers at ARENA Centre for European Studies, argue that it is not – at least not in the traditional sense. In their new research, they trace the origins of European citizenship all the way back to the creation of the European Communities, and show how the concept has changed together with the process of European integration.

'Our argument is that European citizenship, in the beginning, was more socially embedded. It was created to correct markets. Since then, and especially during the 1970s and ‘80s, this has gradually been eroded. The consequence of this is that social rights have been lost in the battle of what the EU ought to be', Olsen says.

Another way to put it, is to ask who benefits? According to Menéndez, the extension of rights for some will often mean less power for others. While these extensions may be well-intended and justified in the narrow sense, they might lose sight of the corrosive effect it can have on society as a whole.

European citizenship, in the beginning, was more socially embedded. It was created to correct markets.

'Its main negative effects results from the fact that it has changed our focus. It focuses on the problems of certain classes of people, neglecting the interests of others. What from the standpoint of high flyers are obstacles to their movement, from the point of view of largely non-moving working class people are essential norms protecting their wage levels and social benefits', says Menéndez.

As their point of departure, Olsen and Menéndez use the national and territorial understanding of citizenship. In most countries, this came about through a class compromise. Perhaps more importantly, it underscores the highly political nature of citizenship. Rights have in many cases been gained through war and people openly and explicitly disobeying laws.

'The development of citizenship has paralleled the development of societies, and has gradually evolved from a minimalist understanding to a concept involving important social rights. This is due to the fact that the working class, and, to some extent, social movements such as the women’s movement, started using citizenship as an argument for inclusion and more rights', Olsen says.

Inclusion and participation is key to the authors’ understanding of citizenship:

'We conclude that European citizenship is not a real citizenship precisely because it is extremely weak on political participation. Thus, it is just a form of “nationality” in the old sense, meaning that people are subject to laws they have little influence over when being drafted', says Menéndez.

Central to their argument is the role of the European Court of Justice (ECJ). Through a number of highly influential court cases, the ECJ has extended citizenship rights to more and more groups, and given companies and economic interests cover by the same rights. According to Olsen and Menéndez, the flip side of this is that social rights have been gradually weakened.

We conclude that European citizenship is not a real citizenship precisely because it is extremely weak on political participation.

'The four freedoms have been seen as more important than almost every other consideration. It was not obvious in the 1960s that this was the way it was intended, but a few very specific court cases based on unclear provisions of the treaties have had enormous consequences for the EU, nation-states and local governments. This has big political implications' Olsen says.

Laval argued that its freedom to provide services had been infringed, and that it was only bound by collective agreements with unions in Latvia. The court ruled, with some exceptions, in Laval’s favour. This, and similar cases, effectively opened up the Swedish market to companies that operated within a regime very different from that of Sweden.

According to Olsen, this means that what was meant to be a supplement to national citizenships might instead turn out to be a competing citizenship status.

'There is a danger that European citizenship ends up eroding the democratic citizenship found in nation-states'.

The authors point to the handling of the euro crisis as a case in point. While many see the crisis as a drama that brought with it new developments, their view is that it is in times of crisis that the true nature of the system becomes visible.

There is a danger that European citizenship ends up eroding the democratic citizenship found in nation-states.

'The crisis has not so much redefined what the EU is, as revealed what the EU is about. The most obvious finding derived from the crisis is the apolitical character of European citizenship. In addition, dysfunctional institutions tend to develop an addiction to emergencies, because it is during crisis they can justify setting aside the standard limits to action', Menéndez says.

A more social and inclusive Europe

In the debate about European citizenship, the underlying premise has been that it is a good thing. Olsen and Menéndez agree that the extension of rights on the basis of membership of the European community has brought many benefits, but believe it is paramount to discuss what this means for our understanding of citizenship – and the real-life implications of this.

If the EU wants to create a community and a European identity, it has to think differently about what European citizenship should be. Instead of narrowly focusing on rights, citizenship must also be about participation, identity and having a voice in the development of the political community.

This, according to the authors, involves creating more social rights at the European level. It also involves looking more critically at some sacred cows, such as the four freedoms. In some cases, the ECJ’s interpretation of the treaties has resulted in a situation where European citizens exercising their rights given to them by the four freedoms have been granted more rights than natives – known in the literature as reverse discrimination.

Olsen believes this is relevant for the discussion on Brexit as well, and, by extension, Norway.

'The discussion on free movement in relation to Brexit has by many been seen as racism. That’s part of the picture, but many also have legitimate worries about what’s happening to the labour market, social rights, steady employment and social care. These are related. In Norway, the problem is to some extent even bigger, because we are bound by most of the same rules without being able to participate in the decision-making process'.

If the EU wants to create a community and a European identity, it has to think differently about what European citizenship should be.

'This is why we find that European citizenship has not only failed for European citizens, but also for non-citizens, as it has not prevented the present rapid diffusion of exclusionary understandings of membership. We are convinced that political communities need borders and that a borderless world would necessarily be a world in which power, especially economic power, would meet even less constrains. This could allow the privileged few to exert even more influence', says Menéndez.

Menéndez argues that borders, to be legitimate, have to be porous to human need.

'Given the breadth and depth of European integration, such as visa free travel and the right to work in whatever country you wish, European communities and states today have to take responsibility for not only their own citizens, but also take into consideration how their actions affect the citizens of other political communities. If to maintain the legitimacy of the European integration, we need a more social and inclusive Europe with more solidarity across borders'.