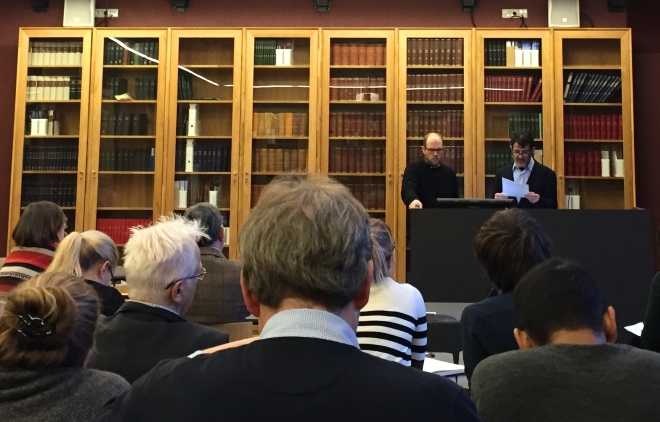 Workshop conveners Espen D.H. Olsen (left) and Agustín J. Menéndez kick off the workshop " Who is the European citizen? Who is the refugee?" (All photos: Trym Nohr Fjørtoft, UiO)

On Friday, January 13, researchers from all over Europe gathered in Oslo to discuss two questions: Who is the European citizen? Who is the refugee?

Conveners Espen D. H. Olsen and Agustín J. Menéndez started off with what they see as the core of the question: — It’s all about people. The refugee crisis has revealed the deeply problematic character of the definition of the refugee, Menéndez said.

He claimed that the Dublin Regulation, which says that the country where the refugee first entered the EU is responsible for that refugee, has gone into pieces.

From a philosophical perspective, Catherine Colliot-Thélène (Université de Rennes 1) highlighted citizenship as a right to political activity and argued that this is not reducible to political rights. Furthermore, the traditional distinction between civil, political and social rights prevents us from understanding what is truly original about modern citizenship.

­— The main message from the workshop was the need for more interdisciplinary work on personal statuses and European integration. For long, issues such as citizenship, refugees, and asylum policies have been treated as distinct areas of research, yet our discussions clearly highlighted how they are interrelated in the EU context, Espen D. H. Olsen said after the workshop.

— Who the European citizen is, is no longer clear-cut and needs to be scrutinised more critically.

Stefanie Pukallus (University of Sheffield) showed how European citizenship developed along with concepts like public autonomy and civil society. The idea of European citizenship has developed from an economic-social understanding of the citizen as a “Homo Oeconomicus” in the two decades following 1951, to a “Europe of rights” today.

So, how have the concepts changed, and how does it matter?

— The Cold War idea of the refugee was one of the political dissident who fled persecution under Communism. Today, refugees come from very diverse backgrounds and regions of the world, Olsen explained. Many suffer persecution, and many face grave economic circumstances in their country of origin.

— In the past, most refugees were seen as future European citizens. This is no longer the case, Catherine Wihtol de Wenden (Sciences Po Paris) argued.

Refugees are the real losers

While there is a ‘right to protection’ for refugees, states also want to restrict access to their own territories. They want to control which ‘kind’ of refugees they let in. All the while national and European leaders struggle to reach some consensus on European asylum and refugee policies.

— In this situation, the real losers are the refugees, especially those who now dwell in uncertainty virtually at the threshold of Europe, Olsen claimed.

European citizenship was supposed to be the foundation of a post-national Europe, a new kind of membership based on free movement. The workshop discussions revealed that in reality, the picture is much more muddled.

— For instance, the right to free movement is clearly not equal for all EU citizens, Olsen said.

One example is the distinction between economically active and non-active citizens. The European Court of Justice has found that economically non-active citizens have no rights to, for instance, social subsistence. Sandra Mantu (Radboud University) argued that in many countries, social rights have become a way to manage migration. The idea is that if you are not granting people social benefits, they are not going to move.

— What used to be called social security is now defined as social assistance. And it is much easier to deny assistance than security, Mantu said.

The lives of ordinary people

According to Olsen, this means that legal residence becomes a real threshold for EU citizens' integration even if they use their right to free movement. Such issues will probably become even more salient in the coming years, as there is a surge for ‘renationalization’ in many EU countries.

— After Brexit, there has been a surge in British citizens applying for citizenship in other EU member states, Galpin observed.

Finally, what do these conceptual insights have to say? Why is it important to understand these terms?

Concepts are part of political life, according to Olsen. In his view, the workshop highlighted that the way decision makers and courts understand different personal statuses can have strong impacts on the lives of ordinary people.

— This is crucial: research on European politics exposes the ‘bigger picture’. In terms of citizenship, refugees, and personal statuses, this implies taking seriously the fact that these developments have a bearing on the lives and opportunities of human beings, Olsen concluded.