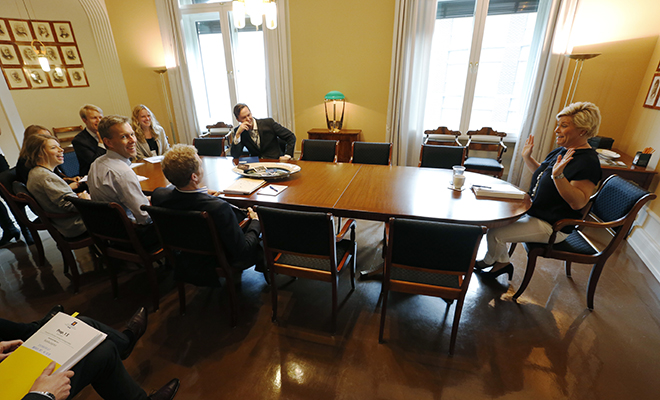 Economists are powerful in the Norwegian Ministry of Finance, according to Johan Christensen. Pictured: Minister of Finance Siv Jensen and bureaucrats in the Ministry preparing a presentation of the National Budget, 6 October 2014. (Photo: Lise Åserud / NTB Scanpix)

The year was 2009 and the financial crisis was raging. Ireland had only a few years earlier been praised as an economic miracle. From the mid-1990s to the middle of the 2000s the country had experienced an economic growth comparable only to the East Asian ‘tigers’. It even used to be called the Celtic Tiger, but Ireland was now one of the countries hit hardest by the financial crisis. What had gone wrong?

Norway was the opposite of Ireland

Johan Christensen, The Power of Economists Within the State, Stanford University Press, 2017.

Christensen is Assistant Professor at Leiden University and is together with Cathrine Holst the coordinator of the ARENA project EUREX: Expertization of public inquiry commissions in a Europeanized administrative order

The same year, Johan Christensen started the research that has now become his latest book, The Power of Economists Within the State. The questions are:

Christensen has examined the influence of economists on tax policy in four countries: Ireland, Denmark, Norway, and New Zealand. And maybe the cause of Ireland’s crisis lies here.

‘The Irish government had stimulated the economy by cutting taxes for a long time’, Christensen explained at a recent seminar. Not only did they cut taxes, they also introduced a number of special deductions and exceptions.

‘The combination of lowering taxes and collecting them on an ever narrowing tax base meant that when the crisis hit and the economy didn’t grow by eight percent per year anymore, Ireland simply didn’t have the money to cover its expenses’.

Ireland’s tax policy was directly contrary to what was considered good tax policy. Norway was the opposite of Ireland. The Norwegian tax reform in 1992 was a drastic reorganisation towards the principles of good tax policy: The government lowered the taxation rates and removed a host of tax reliefs and deductions. Why did the countries arrive at such different policies?

Christensen maintains that difference in the influence of economists can explain the difference between the two countries.

An anti-intellectual mood prevailed in the Department. It’s about getting the job done, not running around on conferences and presenting papers, as one public servant put it.

In Norway, however, economists have had much power over economic policy ever since the first years after the Second World War.

The book in short

Historical factors are partly to blame. Ireland has imported a model from Great Britain where public servants are hired based on a central, general exam. This gives Ireland bureaucrats who can work about anywhere, at the expense of specialised experts.

Norway practices local employment where you pick people for each individual position. This makes it possible to hire more specialised bureaucrats, which has made an opening for economists.

Furthermore, the alliance between the Norwegian Labour Party and the so-called Oslo School, that is, the circle of economists at and around the University of Oslo, gave economists a prominent place in the social democratic state that was built after the war.

But does the role of economists determine who is in charge of tax policy? Christensen argues that the presence of economists affected the power balance between bureaucrats and politicians. This has happened in three ways: Through expertise, ideology, and norms.

‘The tax system didn’t contribute to an efficient use of resources. And they were able to show this with various analyses of tax rates and their effects’.

But they could also define clear solutions. Politicians had often very vague notions of what to do with the tax system. Economists came to the scene, according to Christensen, with clear, concrete suggestions about how it could be structured.

In Norway, economic expertise gave the bureaucracy tools to stand up to politicians. In Ireland, by comparison, officials neglected to carry out even the most basic analyses, which allowed politicians to do as they pleased with the tax system.

Furthermore, ideology was a crucial factor. To many economists, economic theory was in itself an important motivation to carry out reforms, said Christensen:

‘If expertise was the murder weapon, ideology was the motive’.

Economists had a clear vision of how things should be and were willing to leverage their position in the bureaucracy to gain approval of these ideas.

Finally, there existed an idea about professionalism among economists, a strong identification as economists. This meant that economists were willing to be disobedient and step into the policy field – in stark contrast to the classic image of the neutral bureaucrat.