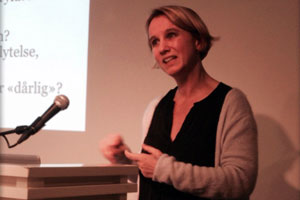 The EU and gender equality policy – and implications for the EEA country Norway – was the theme when the Centre for Research on Gender Equality (CORE) in collaboration with ARENA Centre for European Studies hosted a conference at the House of Literature in Oslo on 5 November 2015.

Besides the introductory keynote addresses by Johanna Kantola (Helsinki University) and Kirsten Ketscher (University of Copenhagen and Oslo), PhD student at ARENA Helena Seibicke lectured on the European Women's Lobby, followed by Senior Researcher Cathrine Holst’s (CORE and ARENA) introduction on the EU and gender equality policy in Norwegian government reports. Key actors from civil society (the organisation against public discrimination OMOD and legal aid for women JURK), labor organizations (LO and KS), public administration (Ministry of Children, Equality and Social Inclusion) and politics had also been invited to shed light on different aspects of Norway's relations with the EU in the gender equality field.

– While EU anti-discrimination legislation has contributed to strengthening the protection against discrimination in the Nordic countries, the funding has been important for member states in Southern Europe, Kantola explained.

All five pillars of the EU’s gender equality policy have according to Kantola been weakened over the last decade. Fewer equality directives are put forward, less money is allocated and gender perspective are not taken into account in the development of the Union's policies.

– When the development is now at a standstill, this is due to a lack of political will and continuous observation. On top of all this we have the economic crisis, which has proven to have a particularly strong impact on women. The austerity policies, which is typically justified with reference to EU demands, have a harder effect on women, as welfare programmes that are important to keeping them in the labor market, are cut. The gender perspective is absent when developing the auterity measures, Kantola underlined.

A far more positive account with regard to the EU as a gender equality promoter was given by Kirsten Ketscher, Professor of Social Security and Welfare Law. In her lecture on the European Court of Justice (ECJ)’s practice and impact on gender equality, she presented a number of examples of how the Court has been very progressive in its interpretation of anti-discrimination law and paved the way for greater equality between women and men. Among the judgments which in Ketscher’s view will affect Norwegian legislation, is the so-called Maïstrelli judgment of 2015, which states that fathers as well as mothers have an individual right to parental leave. Under the current Norwegian provision, the father's right to leave depends on the mother’s participation in the labor market.

– This is a very interesting case because it affects Norway. I cannot imagine there being any alternative; Norway has to abide by the ECJ’s judgment, which states that such a provision is contrary to the parental leave directive as well as the equality directive. Norway is committed by both, Ketscher underlined.

With regard to the ECJ’s style of interpretation, Ketscher said the following:

– The European Court of Justice is both creative and innovative, and often demonstrates an unexpected interpretation style. It strengthens individual rights, and rejects interpretations that are to the detriment of the individual. The Court is, simply put, a good friend for women, she concluded.

The conference revealed that the EU's influence on Norway's gender equality policy is significant. At the same time, the Norwegian form of EU affiliation makes it difficult to influence EU policies. The lack of participation rights entails that other channels must be used if Norway is to put its mark on the European gender equality policy. However, the conditions for lobbying are challenging.

– Lobbying at the EU level is very resource-demanding. With limited resources we rather prioritize the UN system, where civil society has a much more obvious place than at the EU level, Frøydis Patursson from JURK revealed.

– If Norway wants to influence the direction of this policy, it is important to make use of the available room for maneuver, she underlined.

This article was first published by CORE on 12 November 2015 (in Norwegian).