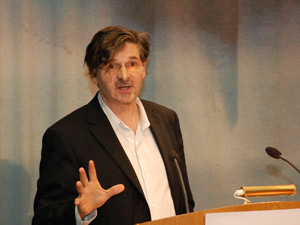 Jan-Werner Müller was invited to University of Oslo to hold the lecture 'Fear and Freedom. The Legacies of Mid-Twentieth Century Liberalism'. (Photo: Sindre Hervig/UiO)

– The two Latvian political thinkers, Isaiah Berlin and Judith Shklar, and their ideas can help us understand the development of constitutional democracy in mid–twentieth century Europe, Müller argued.

It was not the political language of liberalism that informed these developments, as these ideas were widely seen as having paved the way for the totalitarian nightmares of the century in the first place. These institutions were raised in the shadow of aggressive nationalism and state terror, but also out of fear of the totalitarian actions of unconstrained collective political subjects.

In his famous inaugural lecture at Oxford University, Isaiah Berlin discussed two concepts of liberty. One of negative liberty based on non-interference, or ‘freedom from’ and another one of positive liberty based on the ideas of self-mastery, self-determination, and self-realisation, or ‘freedom to’. Berlin warned that collective self-mastery could turn into collective enslavement of people, as it has shown to be susceptible to rhetorical abuse by authoritarian ideologies.

The anxiety of this concept of negative liberty is based on a fear of interference. – But, if you fear losing liberty, you have already lost liberty, Müller argued. An absolutely resilient and foolproof concept of liberty can in the end be foolish. An example of this is the Bush-administration’s ‘1 per cent doctrine’ that stated if there is the smallest chance of terrorism, we must do everything in our ability to limit it, including losing some of our liberty.

The liberalism of fear

In his lecture Müller also mentioned a lesser-known political thinker, the Latvian Judith Shklar. Her term ‘liberalism of fear’ is based on her view that we need to fear a society full of fearful people because fear leads to cruelty and cruelty is the greatest evil of all.

Based on these views she advocates constitutional democracy. It is a flawed system, but still the best form of government possible, because it protects people from the abuses of the more powerful by restricting government and by dispersing power among a ‘multiplicity of politically active groups’.

The European post-war order had an anti-totalitarian imprint, stemming from the fear of unconstrained collectivism. – There is an interesting link between constitutional democracy and totalitarianism, the fact that both are attempts to contain collective subjects, Müller argued. Hence you have the novel innovation of the constitutional court, which balances political values such as dignity, security, and liberty within constitutional constraints. – The European Union and the Council of Europe do exactly the same; they add layers of constraints and rights protection, Müller explained.

– In the present times it is not collective self-enslavement or a master or tyrant interfering in our lives that we fear, Müller said. – We have an anxiety of loss of collective freedom, of our democracies becoming more constrained.

It is a fear of such forces, like markets, that are by many seen as illegitimate or un-authorised, that drive the populist political forces in Europe today. Be they right-wing nationalists, anti-capitalist social movements or pro-transparency groups like the pirate parties.

– For us today it might be a question of how we should contain these actors that may challenge our collective freedom today, Müller concluded.

Jan-Werner Müller was invited to the University of Oslo by the Norwegian Research Council to contribute to the series ‘1814-lectures’.

The series is part of the celebrations leading up to bicentennial celebration of the Norwegian Constitution in 2014.

The series sheds light on the historical complexity and ambiguity of a central term in all constitutions; the seemingly straightforward concept freedom.