In the extended Tuesday Seminar held on 28 April 2015, which was also ELJ's For and Against Series #2, Prof. Neil Walker from Edinburgh Law School and Julio Baquero Cruz from the European Commission discussed constitutional pluralism. 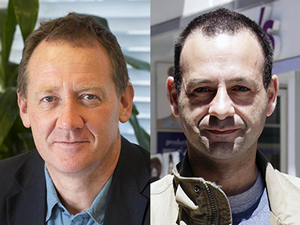 The seminar was organised in cooperation with the European Law Journal (ELJ) and was the second event in the ELJ's For and Against Series.

Is constitutional pluralism still relevant to make sense of the constitution of the European Union?

Please note that this is work in progress and thus has limited distribution, please contact us if you would like access. Do not cite without permission from the author.

The ELJ's For and Against Series

Most academic writing comes in the form of a long monologue. But all fundamental problems are by definition complex both in factual and in normative terms. The For and Against Series of the European Law Journal aims at thinking problems in between two opposite views. Each session is organised around one topic and two speakers who will engage with each other and will encourage the audience and later the readership to look at the two (or more) sides of each fundamental question being debated.

ELJ's For and Against Series #1 is co-organized by the Department of Public and International Law at UiO's Law Faculty on 27 April at 12:00.

Prof. Neil Walker holds the Regius Chair of Public Law and the Law of Nature and Nations at the University of Edinburgh.

His main area of expertise is constitutional theory. He has published extensively on the constitutional dimension of legal order at sub-state, state, supranational and international levels. He has also published at length on the relationship between security, legal order and political community.

Julio Baquero Cruz is Member of the Legal Service of the European Commission.

Baquero is also visiting professor at Sciences Po (Paris) and at Universidad San Pablo CEU / Fundación Ortega y Gasset (Madrid). He holds a PhD in Law from the European University Institute. He has been a référendaire at the European Court of Justice and has lectured and published extensively on EU law.