Professor William E. Scheuerman will give a presentation 'Can Political Institutions Commit Civil Disobedience?' at the seminar at the Faculty of Law. The seminar is jointly organised by the Department of Public and International Law and ARENA. 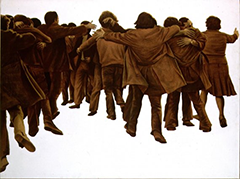 William E. Scheuerman is a Professor of Political Science and International Studies at Indiana University (Bloomington).

ARENA Centre for European Studies and Department of Public and International Law, The Faculty of Law, University of Oslo
E-mail this page