Hilde Reinertsen and Kristin Asdal address how the blue economy is calculated in a new article in Journal of Cultural Economy. 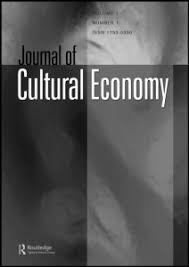 The 'blue economy' has in recent years become a leading concept for envisioning what may come after the fossil-based era. In efforts at calculating the potential economic value of the ocean, policy-oriented documents seek to unite diverse actors around common goals. Through the calculation of numbers, large-scale and long-term policy visions are being crystallized. But how do such numbers come into being in practice?

The article interrogates this question with an example from the Norwegian context: The established policy-goal of a so-called 'five-fold increase' in marine value creation in the year 2050.

While powerful numbers are commonly expected to be produced through the procedures of 'mechanical objectivity' that involve strict quantification and scientific methods, our analysis shows a rather different route towards a powerful number: By loosely combining tools developed for business management, the number is calculated by, first, openly combining qualitative and narrative operations into the calculation and then, next, decoupling qualitative uncertainties from the quantified potential. The result is a calculative process that takes the form of what we suggest to call 'reflexive objectivity' and a policy-oriented number that encourages risk-taking and action over restraint and precaution.