Conceptualizing, Theorizing, and Historicizing the Bioeconomy

A PhD course on the bioeconomy was held in Oslo 9-13 December as part of the ERC Little Tools project. 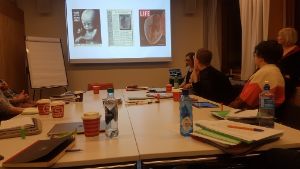 The PhD course "Conceptualizing, Theorizing, and Historicizing the Bioeconomy" was organised by the Centre for Technology, Innovation and Culture (TIK) at the University of Oslo on December 9-13, as part of the ERC Little Tools project.

The course aimed at exploring the 'bio-economy' by historicizing and theorizing its components: 'life' and 'economy', its in-betweens, and their long-standing relations. In particular, the concept of 'bios' (i.e. life/the living), temporalities and reproduction was explored from a (feminist) technoscience studies angle. Some key questions were:

The course was led by Martina Schlünder, Professor II at TIK, and Little Tools PI Kristin Asdal, with lectures also from Susanne Bauer (TIK) and Solveig Julich (Uppsala University). The course gather PhD students with diverse backgrounds and from different institutions: TIK (UiO), the Faculty of Medicine (UiO), Center for International Climate Research (CICERO), the Norwegian University of Life Sciences (NMBU) and the University of Helsinki. All students presented their PhD projects and a draft paper during the course week.

The course started off with all participants presenting their background, research interests and project. There was ample time for questions and discussion, allowing everyone to get familiar with and engage in each others work throughout the course week.

Wednesday also started off with paper presentations and discussions. Later in the day, Solveig Julich held a lecture on "Reproductive Tissue Economies: Historical and Conceptual Perspectives" followed by a discussion. The next day opened with more paper presentations, before Susanne Bauer held a lecture on "Digital Economies. Theorizing and Historicizing the Data Promise in the Bioeconomy".

The final day was organised as a material objects class. All participants were asked to bring and present one thing important in their work, which resultet in lively discussions on the role of material objects in their respective fields of inquiry.

More information about the course here.