Béatrice Cointe is a new addition to the Little Tools project, strengthening the group's capabilities in researching economic transcriptions of fish. 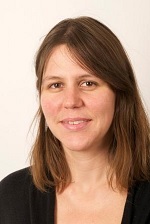 Nearly half a meter of snow surrounds the University of Oslo cafeteria, and I remember Béatrice's Twitter description reading:

After the weekly project lunch, she is nursing what by now must be a lukewarm coffee. "The project group was a great fit for me. And I like it in Oslo," she says. "It's a relaxed city." The Postdoctoral Fellow is herself projecting volatility in calmness.

Since her arrival to The Little Tools project in September last year, Béatrice has been looking closer at economists working with fish, and how they participate in contemporary economics.

"It's exciting, because when you read accounts of it, economics appears as a very monolithic field. However, looking closer, to the sites of economist practice, complexity swarms. What you first see is the orthodoxy, the ones who are published in the big American journals et cetera. They are only the tip of the iceberg - further down is rich variation!"

"More interviews with cod economists are coming up, and I'm hopeful I'll get to visit additional sites economic fish experimentation," she says. "So far I've seen those experiments that are letting people come in to taste fish, asking them what they would pay. Another kind of experiments are about perceived qualities. This can be the different ways of assessing fish attributes, like smell, taste, anatomy, ranking them in economic terms."

The work of economists goes on as Norway develops its position as a power house in fish farming. "My goal is to obtain better understanding of how these kinds of 'bubbles' within the field of economics relate to each other. Also what kind of economics makes its way to industry and production, and what moves upstream, so to say."

There is a line running through her work. The master thesis was delivered in 2011 for a dual degree in Environmental Policy between Université Pierre et Marie Curie, Paris VI, and Sciences Po. "In 2°C : the history of a policy- science nexus I explored the temperature goal around the time of the Copenhagen Climate Conference."

"Following the history of the 2° goal, tracing its transformation from a term, a heuristic among researchers, to become a boundary object between academic disciplines, I studied also how the 2° goal traveled out of academia and into global politics."

In between climate and cods, Béatrice did her PhD work on solar energy. It was done at Centre International de Recherche sur l'Environnement et le Développement, part of the École des hautes études en sciences sociales, thematically also in the realm of governance and sustainability. "When I started, I was looking at the promises of photovoltaics, and my idea was to study regional innovation projects stimulating deployment."

The French policy of reimbursing people who installed solar panels and fed power back into the power grid, suddenly stopped.

"It was a political crisis overflowing from the renewable energy sector. As such, it was a critical moment for solar energy in France. So a little by chance, I ended up studying the debate of in feed tariffs [the reimbursement system], and how solar became an object of conflict. I'm co-writing a book on this and energy transitions in general that will be published within the next 6 months."

The Little Tools project warmly welcomes Béatrice Cointe to the group. Her work can be followed through her publications page at UiO, and the aforementioned Twitter account.