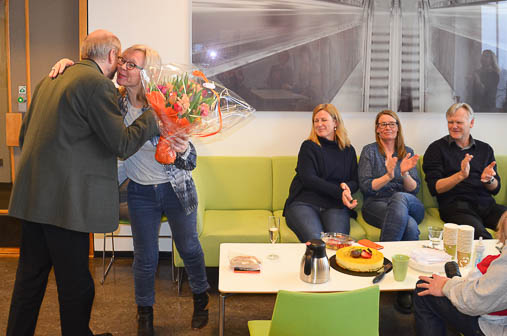 Asdal has received an ERC Starting Grant. The funding is for the project “Enacting the good economy: Biocapitalization and the little tools of valuation”. She will be studying the so called “blue revolution”, or the revolution in aquaculture: The fish we are eating is increasingly farmed rather than caught.

- I am looking forward to get to develop further as a researcher through a project like this. It will last for five years, and it gives me the opportunity to build a team around my research interests, and to plan for the long term.

The application process has taken nearly a year and gone through several nerve-wrecking stages. This autumn the project will be initiated, with the recruitment of young researchers.

- I have been able to develop the project on my own, and the funds will enable more research than what I could have done otherwise. Throughout my career I have had several long stays abroad, and I also wish to use the project to further develop my networks.

Already as a PhD student she spent time in Paris as a visiting scholar,  and has later been to Lancaster, Oxford and Berkeley, California.

- The project I have now received funding for has developed in contact with these environments. I would further add that I have had good support and colleagues at the TIK-center, which has contributed to a strong application.

- How will such a prestigious grant affect your career?

- First and foremost it’s a recognition of the work I’ve been doing so far, and the opportunity to keep doing a good job, under better conditions. In addition, I can now work with several young researchers, which is something I find very meaningful.

Interdisciplinary research on the life sciences

Asdal is an interdisciplinary researcher with science and technology studies as her specialty. She investigates the interplay between politics, economy and science.

How does science take part in transforming the economy? How are new forms of capital, such as biocapital, created, by understanding and producing life in new ways? What is value creation, and which values are being created?

- I want to study what happens with the great European transition to the new so called bioeconomy. I want to investigate how and by what means such transformations happen, and not least which role science plays in such a development. Theoretically and empirically, I am interested int the interplay between science and economy, says the professor.

Specifically, the project will deal with cod. It has proven much more difficult to do cod aquaculture than salmon aquaculture. The transition from catching to farming a domesticated animal is closely linked with global environmental and commercial politics.

- I take the cod as a starting point in order to understand the development of the new bioeconomy, says Asdal.