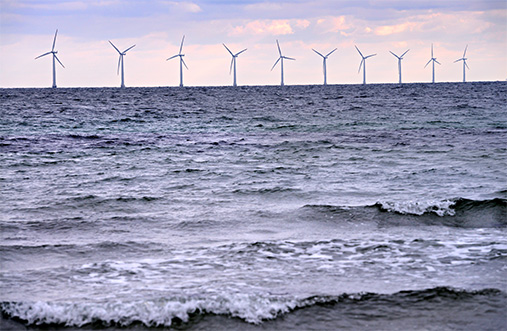 A long coastline, large sea areas and extensive experience from offshore industry mean Norway is very well equipped to develop offshore wind technology. However, findings published in a new doctoral thesis indicate that experiences from these industries have also contributed to a slowdown in Norway's investments in renewable energy.

PhD candidate Håkon Endresen Normann at TIK Centre for Technology, Innovation and Culture has studied the Norwegian offshore wind industry for a number of years.

"Most of the companies that work with offshore wind use equipment and expertise that was originally developed for the oil and gas industry. This has given them an advantage, but we also see that these companies have in part been motivated to develop wind power by the bad times in the oil and gas industry. Now that things are picking up again, the offshore wind power project has been shelved," says Normann.

The Norwegian national energy strategy Energy 21 drawn up in 2007 highlighted offshore wind farming as one of the industries Norway should concentrate on. Since Norway's electricity needs are largely met by hydropower, the strategy stressed that the supplier industry should target the international market for offshore wind.

The same has since been repeated by politicians; for example the 2016 energy report emphasised that offshore wind providers must think internationally.

In 2008–2010, there was great optimism about Norwegian offshore wind farming. The financial crisis meant that offshore suppliers were looking for new opportunities, and offshore wind was to be the new industrial adventure.

It did not pan out that way. According to a report from the consulting company Make Consulting, Norwegian suppliers have only taken 5% or less of the deliveries to the offshore wind market since 2010.

In his doctorate Normann identifies several possible explanations for this industry's lack of success, one being that the sharp fall in oil prices in 2009 was followed by rising prices two years later.

"2009 was marked by redundancies and uncertain times in the oil and gas industry. Many suppliers had to look further afield for other ways to make money, and several began developing technology for offshore wind," he explains.

However, Norway fared the financial crisis better than expected, and the oil industry recovered. By 2011, oil prices had stabilised at a high level. Major discoveries were made on the Norwegian continental shelf in 2010 and 2011, resulting in, among others, Johan Sverdrup, which is now the largest extraction project in Norway. 2013 and 2014 were peak years on the Norwegian continental shelf.

"As soon as lucrative opportunities appeared in the oil and gas industry, much of the interest in enticing part of the supplier market to offshore wind evaporated," says Normann.

The political will to invest in offshore wind also diminished when the industry no longer needed help.

"Establishing oneself in a new market requires a concerted effort over time, even more so when the market is overseas. This in turn requires a long-term policy, which we have not had in Norway.

In his thesis Normann documents the partial overlap between the suppliers to offshore wind and the oil and gas sector. Telephone interviews with 102 Norwegian suppliers revealed that few work exclusively with offshore wind. Some 40 per cent of the companies reported that their primary activity was in oil and gas or the maritime sector.

A staggering 80 per cent stated that their offshore wind activities were based on experience and/or technology from other industries, primarily the oil and gas industry and the maritime sector. Some were start-ups that used technology from these industries; others had their primary activity there.

"Many companies appear to have underestimated the challenges of adapting to another industry. The supplier industry has high costs and is not accustomed to having to keep costs down, as is necessary in the offshore wind sector. It has been challenging for Norwegian businesses to go from contracts in the oil and gas industry to offshore wind contracts.

In the interviews many companies also said that it is difficult to get contracts without a domestic market.

"They have to target an international market from the very outset, and this is particularly demanding for small businesses. Offshore wind is a capital-intensive industry where testing and verification are very important. This costs money, and it can be difficult to find investors who are willing to help finance such testing," says Normann.

Compared with onshore wind and solar energy, offshore wind is an immature industry. Internationally, Germany and the UK have led the way, backed by national subsidisation schemes. Offshore wind farming has grown slowly but surely.

Normann believes that Norway is well placed to develop offshore wind: we have sea, coastlines, wind, deep harbours, technology, boats and expertise. However, there are also a number of demotivating factors.

"Norway will not see its emissions reduced significantly by offshore wind energy, since almost all our electricity comes from hydropower. Much of Germany's power supply is based on fossil fuels, meaning there is greater political motivation to support offshore wind," he says.

According to Norway's strategy document Energy 21, both offshore wind and carbon capture and storage (CCS) are important priority areas for Norway. However, there is a noticeable distinction between these two industries," according to the PhD candidate.

Håkon Normann is a PhD candidate at TIK Centre for technology, innovation and culture.