Pessimism prevails about the future of carbon capture and storage in both the USA and EU. This is despite the fine promises that it was precisely this technology that would save the oil and gas industry.

- There's a sombre mood among people who work with carbon capture and storage now. Lobbyists in the US and the EU wonder how much longer they can keep going, says Mads Dahl Gjefsen, a scientist at the TIK Centre of Technology, Innovation and Culture at the University of Oslo.

He is completing his PhD thesis: "Vehicle or destination?  Discordant perspectives in CCS advocacy", a study of how different players work to gain support for CCS.

Murkiness in the corridors of Power

Norway has invested several billion kroner in the research and development of carbon capture and storage (CCS). The technology was intended to reduce emissions from the oil and gas industry, and in 2007 former Prime Minister Jens Stoltenberg said that CCS would be Norway's moon landing. But a full-scale treatment plant at Mongstad never came to fruition. The major challenge has been that the technology is energy-intensive and too costly for large-scale use. And this is not just a Norwegian problem.

According to Gjefsen, the enthusiasm for CCS in the corridors of power has gradually dissipated in both the USA and EU

- In the aisles at carbon capture conferences, you hear that things look bleak.  Publicly, they speak of urgency and the fear that it will not work.

During the last four years, he has observed and interviewed a number of players in the industry, environmental organizations and government. In formal interviews as well as more unofficial conversations, he found uncertainty about the technology's future.

- I have studied the arguments that are used to justify CCS in different parts of the world and seen that these vary considerably. While Jens Stoltenberg used the moon-landing metaphor, EU lobbyists focused on the ability of the technology to tie European countries more closely together. In the USA, the technology has been presented as an alternative to restrictions on emissions, says Gjefsen.

But because CCS is a very costly technology, it has proven difficult to achieve without government funding or strict restrictions on emissions that can justify the high costs for polluters.  Thus the arguments have slowly changed.

- Environmental organizations are dependent on alliances with the oil and coal industry to gain support for CCS. To maintain this alliance, parts of the environmental movement in the USA have been forced to emphasize the potential positive effects of CCS for enhanced oil recovery. EOR makes it possible to extract even more oil from a field, and EOR technology is much like CCS technology," says Gjefsen and adds:

- With carbon capture, the hope is to do something beneficial for the climate, but here we see environmental organizations compromise their principles by allying with a practice that critics believe will have the opposite effect, in other words greater emissions.

A major cause of the problems CCS technology has encountered is that the regulations that might have given the technology a boost are insufficiently robust. 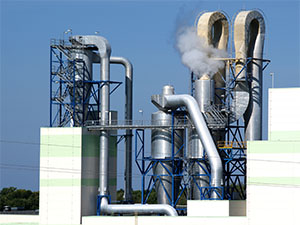 In the USA, major political restrictions on emissions never materialized. Demands for emissions cuts where the polluter pays could give incentives to hasten the development of technology for carbon capture and storage.

- It is difficult to get approval for strict regulations in the USA, but in 2007‒2009, it seemed possible that laws heavily penalizing CO2 emissions would be adopted. Once the fossil fuel industry thought these laws would be passed, they were more interested in carbon capture. But the legislation fell through," says Gjefsen.

Environmental organizations that want CCS in the USA were concerned not just with using ideological arguments, but with obtaining figures showing that the technology can be profitable and efficient.  This has become increasingly more difficult. It has also become more difficult to front CCS in the EU. Gjefsen has studied the group Zero Emissions Platform, which was established by the European Commission to provide expert advice on the technology.

- The price of emission quotas in the EU is not as high as many hoped it would be, and the expert advisers say that it is therefore difficult to implement CCS. Everyone who argues that CCS is a good undertaking says that the quota price must increase if investments in CCS are to be profitable.

Today, quota prices in the EU are so low that it is not profitable for industries to promote carbon capture.

One of Gjefsen's main findings was that completely different factors than climate change drive the development of climate technologies. He has studied the drivers behind one such technology himself and has seen that lobbyists in the USA and EU have argued for CCS in completely different ways. Climate considerations alone are not enough to create political commitment. To succeed, the lobbyists must also show that action on climate change can safeguard local interests.

This is also the case in Norway. Here, CCS became a priority area following a compromise between Norwegian environmentalists and industry. On the other hand, Jens Stoltenberg's moon-landing metaphor focused on CCS being ambitious and important for the world. When the delays and cost overruns began to mount up, the same metaphor was used to ridicule him.

- It is not enough for climate technologies to be both profitable and efficient. In addition they must be able to appeal to local needs that are often completely independent of climate issues. It is therefore important to compare how technology lobbyists operate in different parts of the world, says Mads Dahl Gjefsen.