Newcomers to the farm (completed)

Intensive aquaculture has revolutionised our husbandry of marine species. We approach aquaculture as the most recent turn in the human history of domestication, and ask: What are the challenges involved in husbandry under water? 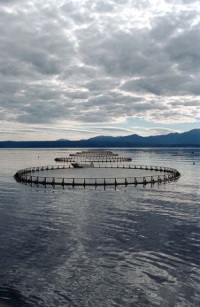 How does the process of domestication change our understanding of the species involved, the animals themselves, and the human-animal relation? How do these processes challenge notions of nature?

In the project 'Newcomers to the farm', we address these and other questions by focusing on the 'wild' and the farmed.

In Tana, Northern Norway, which is one of the largest salmon rivers in Northern Europe, postdoc Gro Ween has looked at fishing practices along different parts of the river. In West Norway, in the region where experimental salmon farming started more than 30 years ago, professors Marianne Lien and John Law have explored current forms of domestication. In both locations we have worked ethnographically, through long-term fieldwork among people, salmon and their technologies.

Our fieldwork involved visits to fieldwork sites in the period 2009 to 2012. We have also worked - and continue to work - comparatively, in collaboration with scholars from both the natural and the social sciences.

Atlantic salmon has been subject to a dramatic transition over the last three decades, from going through a life cycle predominantly in the wild, to a situation in which more than nine out of ten Atlantic Salmon worldwide are born and raised on fish farms.

This historical situation represents a unique opportunity for developing a more sophisticated understanding of marine domestication.

This transition is closely connected to a global increase in intensive and industrialised systems of fish farming in which Norway has taken a key role. This poses particular challenges to Norwegian politics of nature, and environmental and welfare policy and practice. Indeed, it makes Norway both a ‘reservoir’ of salmon biodiversity, and a place where the challenges that intensive salmon farming poses for wild salmon fisheries are particularly acute. We contend that in order to face up to these challenges, a nuanced understanding of this unique, historically unprecedented situation is needed.

Through a focus on salmon-in-the-making in which we trace salmon's transitions between the wild and the farmed, we also explore notions of nature. ‘The natural’ tends to be whatever is said to exist in the external environment, and the focus is on salmon as a wild species whose domestication could threaten global biodiversity. We will have as our starting point that the natural, too, is made through human practices.

The project, which is titled 'Newcomers to the Farm; Atlantic Salmon between the Wild and the Industrial'  was funded by the Norwegian Research Coucil, through the program 'Miljø-2015' (NRC 183352/30).