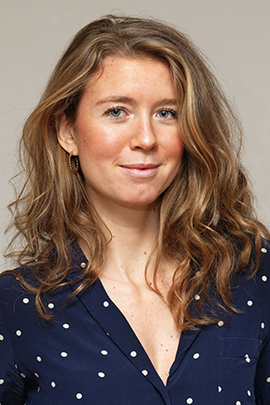 Charline is an Early Stage Researcher (ESR) part of the multi-disciplinary project in the Anthropology of Human Security in Africa (Anthusia) funded by the European Union’s Horizon 2020 research and innovation programme. Her current research interests focus on the anthropology of infrastructure, trade unions and transport, as well as security, mobility and borders. She is enthusiastic about exploring diverse ethnographic methods, particularly through documentary photography and filmmaking.

Within the Epidemic Traces project, her postdoctoral study “Borders of contagion and containment in southern Senegal” examines the nexus between epidemic controls, cross-border mobilities and migration in the border regions of The Gambia, Senegal and Guinea Bissau.

She is currently working on her first book project, Dakar-Bamako: Waiting for a train back to the future, which has been accepted as part of the University of California Press’s book series “Atelier: Ethnographic Inquiry in the Twenty-First Century”. Based on her PhD thesis, it takes the almost abandoned Dakar-Bamako railway as a starting point to explore the socio-political and material (after-)life of this piece of infrastructure that spans across Senegal and Mali. She traces how the railway workers interact with this nearly, but not quite, abandoned network, and how they keep up their hopes, aspirations, and find ways of enduring and resisting the uncertainties of the current moment. By taking the reader on a journey along the train tracks, her ethnography of maintenance, expectation and remembrance contributes to studies of postcolonial capitalist relations as developed in and through material infrastructure.

Prior to joining the anthropology departments at UiO and KU Leuven as a member of Anthusia, she received her MPhil at the University of Oxford, and her BA at King’s College London. She has also worked as research fellow for the International Organisation of Migration in Dakar, the Dickson Poon School of Law at King’s College London and the Wiener Library for the Study of the Holocaust and Genocide.