Named as a world-class research group

The Oslo-based Research Group for Lifespan Changes in Brain and Cognition has been named as a world-class research group. At the same time the group’s founders, Anders Fjell and Kristine Walhovd, have just received the Research Prize for 2015 awarded by the University of Oslo. 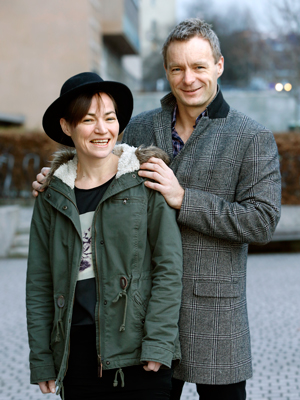 World-class. Kristine Walhovd and Anders Fjell, who won the UiO Research Prize for 2015, founded in 2013 the research group LCBC, who is named a world-class research group.

How do early developmental factors affect our brain throughout life? And how can we optimize our brain function? These are the key questions Fjell and Walhovd have been preoccupied with even prior to beginning their research careers, when they were students of psychology.

Scanning brains of all ages

The married couple study how the brain develops across the lifespan, to better understand how early developmental influences can affect changes in the brain and brain function throughout our entire lives — from 0 to 100 years.

“Our goal is to understand the changes that take place in both the brain and our mental processes throughout the whole lifecycle, and how we can optimize these changes”, says Kristine Walhovd.

She and her husband Anders Fjell are considered to be at the forefront of the field called lifespan research, and have over the last decade began several large-scale longitudinal neurocognitive studies following participants aged from 0 to 100.

“Right now we’re following more than 1000 people of different ages with a range of new measurements of brain structure and function, and here in Norway we can, where our participants consent to it, connect our data to data from the National Register, and discover how health and functioning early in life relates to later brain development and brain changes.”

The research group Fjell and Walhovd established in 2013, Lifespan Changes in Brain and Cognition (LCBC), is by far the most productive and extensive research group at the Institute of Psychology, with more than 120 published articles in internationally renowned scientific journals.

The most cited studies investigate measurable (physical) age-related changes in the brain and how these relate to brain and cognitive function as we age. This provided the foundation for studies of personal characteristics that correspond with such physical changes in the brain, and to cognitive training studies to improve cognitive functioning. Fjell and Walhovd have contributed significantly to our knowledge within both fields.

They have without doubt been among the strongest driving forces in Norway within cognitive neuroscience to incorporate steadily more advancing analysis methods and techniques that have made it possible to answer questions we previously did not have the opportunity to.

The couple recently received 18 million kroner from the University of Oslo and the Institute of Psychology to fund new equipment, and to build their own world-class high-tech laboratory. The biggest single investment has been a brand new MR-scanner worth over 15 million kroner.

The intention behind the Norwegian Ministry of Education´s investment in World-class research group is both to strengthen the ability of groups to appeal themselves internationally and attract leading and up-and-coming researchers, and contribute to the financing of the research activities of the scientists employed.

31.2 million kroner will be dealt amongst five selected research labs, where LCBC is picked out as one of these world-leading environments.

“With this funding we will be able to recruit some of the most promising young researchers in the world today, and therefore get unique expertise that will strengthen our group substantially”, says Walhovd.

“LCBC today consists of many very talented researchers that are very inspiring to work with. Rene Westerhausen, who was taken on by the group as a permanent employee in Winter, has already shown himself to be an asset to the group”, adds Walhovd.

Highlights of a career

Walhovd and Fjell have followed each other close professionally, from when they both were students and wrote their main thesis in psychology in 2001, to when they together defended the same article-based PhD thesis in 2005.

They both were awarded the King’s golden medal for the years best PhD, and Fridtjof Nansens prize for young researchers in 2006.

Both have been employed as professors at the University of Oslo since 2007. They have received several research grants from the Norwegian Research Council, TV-raised funding from the National Association of Public Health, and they each received their own ERC Starting grant in 2012 (Fjell) and 2013 (Walhovd).

In Autumn 2012 they were named as amongst Norway’s 10 most promising young researchers under 40 by the Norwegian newspaper Morgenbladet.