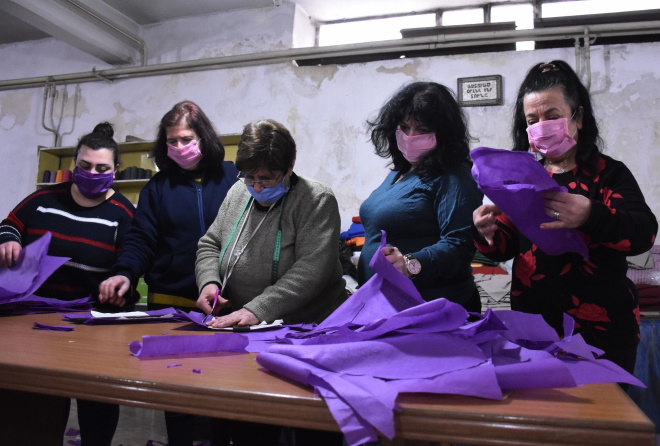 Volunteers: Armenian-Syrian volunteers sewing masks to be distributed to the poor, who need to protect themselves against the coronavirus. Aleppo, 27 March. (Photo: AFP/ NTB/ Scanpix)

Karen O’Brien, professor at the Department of Sociology and Human Geography, is an expert on adaptation. She is one of the most cited researchers at the University of Oslo, and the social geographer is also internationally recognised for her research on the ability of humans to adapt in the face of climate change.

As a member of the UN Intergovernmental Panel on Climate Change (IPCC) over a 10-year period, O'Brien has contributed to social science perspectives on climate effects, vulnerability and adaptation in four reports. In the main report released in 2014, O'Brien was responsible for the part that dealt with transformation.

"Through my work with the IPCC, I noted the opposition that exists to the concept of "transformation" among some heads of state.

Transformation is by no means neutral. It's about who's going to transform who, and in what way.

I am perhaps most concerned about this, considering the adaptations to climate change. That there are so many conflicts of interest. But I also see similarities between the climate crisis and the corona crisis, in this particular context," says O'Brien.

The response by the authorities to COVID-19 shows that rapid change is possible. The question is how society changes, who decides what to do and how people respond to these change processes. If there are winners, who loses and what values and policies underlie the measures. O'Brien says it's important to see the changes we are faced with today from a holistic perspective.

"The pandemic shows how the practical, political and personal aspects of a crisis are intertwined. The virus has created an extreme situation, a bit similar to the financial crisis of 2008, or last year's forest fires in Australia. All three situations require— in obviously very different ways— an immediate response. But the crises also give rise to a more long-term reflection on what we need to do to prevent similar situations from reoccurring." O'Brien emphasises that we must delve into these crises and find more sustainable and fair ways to organise society.

"During crises like these, there is a lot that happens top-down, with the authorities taking various actions. But there's also a lot going on bottom-up by people making their own arrangements," she says.

The proliferation of digital art on the internet, meetings by video conferencing, isolated Italians singing to each other from the balconies, ads on finn.no where free assistance during the corona crisis is offered – these are the activities that, according to O'Brien, show that crises manifest the values that are most important to us.

"In the UK, a call was put out for volunteers for the health service, and thousands signed up. As social people, most of us will help. At the same time, stores in the United States are nearly sold out of handguns. People react in two different ways in the face of change: Either they retreat and protect themselves and their families, or they step forward, embrace a larger "we" and protect the vulnerable, O'Brien says.

"I think both sides are active in most of us. But which part wins depends on how society is organised, and the values that underlie it," she says.

The professor is in the process of submitting an ERC application about changes in paradigms and how we cope with change. The corona outbreak will have an obvious place in this work.

O'Brien also heads the Toppforsk project AdaptationCONNECTS, where a group of social geographers are researching different types of social upheavals, and how these can contribute to successful adaptation to climate change. The focus areas are the coffee industry, tourism, education and the art world.

"In AdaptationCONNECTS, we try to see the connection between head, heart and hands. We want to investigate the climate issue from a broader, deeper perspective. It's not just carbon dioxide or COVID-19 that's the challenge, it's about how we organise our society, the social and cultural norms we embrace, and the values that govern our actions and choices," O'Brien said.

She highlights how the research in AdaptationCONNECTS shows more than anything else that humans are connected, not only physically, but also through emotions, narratives and production of meaning.

The mood among people creates the conditions for the economy," she says.

Challenged students to experiment with change

In her lectures on climate, sustainability, transformation and adaptation at the university, the professor has experienced some frustration with talking about change, considering that a significant aspect of adaptation is taking action. That's why O'Brien gave her students a specific challenge: Within 30 days, they were to undergo a personal process of change related to climate and the environment. They could, for example, choose not to eat meat, not to use disposable plastic, cycle to work, shower with cold water, take care of a plant, not throw food, or go dumpster diving.

The experiment eventually became cCHALLENGE, and O'Brien can report that a long list of students, pupils, mayors and business leaders have now completed the programme.
"This is experience-based learning. It's about changing practices. After the thirty days are over, participants find that they have thought a lot about how they affect others, how they are affected by others, and that adaptation depends on a facilitated system. As in 'How can I sort waste if we don't have a sorting system where I live?'" asks O'Brien.

When people see that change creates more change, the transformation gains momentum. O'Brien emphasises that we all have a network, and even small changes can have major ripple effects. She has previously noted how the abolition of slavery in the United States and Europe and the rise of women's rights in Western countries are examples of how systems previously taken for granted can change. And that prevailing perceptions can be turned upside down, if relatively small groups argue for an alternative.

"Anyone can be agents of change, regardless of socioeconomic background and ancestry. The challenge is that you have to think holistically, you have to think systemically. Your personal choices are always associated with a variety of structures," says O'Brien.

The social geographer can refer to metres of books on the theory of change processes and the conditions for change, but she states that if real change is to happen, people need to identify with it.

"cCHALLENGE is a Trojan horse. By planting the social science curriculum in people's minds, we can start a conversation about who has power, what matters, what stories we tell ourselves and about the possibility of change," she says.

Know how claustrophobic it is

Millions are already affected by the virus, thousands have lost their lives and even greater losses seem inevitable. Just not being able to go out and meet friends, O'Brien knows how claustrophobic it is to be left to yourself all the time. But perhaps the forced situation can also give birth to important reflections, she maintains.

"We may find that systems that seem natural are really just unnecessary constructs. What the outcome of the corona crisis will be depends on the conversations that arise in the interlude.

We must not limit ourselves to just talking about technicalities about whether the planes should stay on the ground or not, but about what values underlie the fact that we have to fly so much in the first place," says the professor.

"We are now seeing how much change is possible and how quickly it can take place. But if we don't maintain the discussion around these changes, I'm afraid a lot of the lessons we’ve learned and experiences we're having now will disappear when the pandemic is over."