- Many people believe that major social change must start from above. But historically we see that such changes have often started small, says Karen O'Brien, professor of Human Geography at the Department of Sociology and Human Geography. 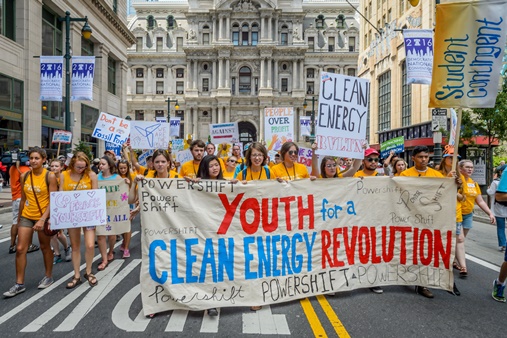 - Historically, we have seen major system changes that often start on a small scale. One person believes that something is wrong - another agrees. As a result, perhaps, groups appear in several places. We can learn much from these earlier processes of change, says Karen O'Brien. Photo: NTB

The abolition of slavery in the United States and Europe, and the emergence of women's rights in western countries are two good examples that systems hitherto taken for granted can change. Gradually, new norms were established, and what was previously considered normal was relegated to being shameful and incomprehensible.

Karen O'Brien, professor of Human Geography, is convinced that similar system change will occur in the future. She expects that we will see changes in such areas as food production, water supply, energy and consumption.

- In the future, people will question the sheer quantity of fossil fuels we use today. They will also ask why we used so many chemicals and how we could have had such a large-scale meat production, she says.

Belief in dialogue between researchers and grassroots

Systemic change is the theme of the Ecological Challenges Conference which takes place 15th – 18th February. The conference will be a forum for academics and environmentalists. The conference is founded on the realization that international negotiations and new technology is not sufficient to combat climate change. Social systems must change, and grassroots movements will play an important role in that, according to O'Brien.

- Historically, we have seen major system changes that often start on a small scale. One person believes that something is wrong - another agrees. As a result, perhaps, groups appear in several places. We can learn much from these earlier processes of change, she says.

O'Brien recalls the rise of women's rights as an example. The 1850s saw the emergence of feminist movements in the United States and in Britain. These movements had spread to many countries by the 1900s.

- I think that a dialogue between grassroots movements and researchers is a good idea if you are to change systems. Researchers can contribute with valuable knowledge.

Change happens at the fringes of society

- It is difficult to measure the willingness and ability of a system to change. But we see many underground networks that operate in the margins of society, such as groups working to share and repair consumer durables, protect the bee population or create urban green gardens. Such networks get little media attention, and are often not visible until the system is ready for big changes.

Karen O'Brien sees exciting trends among today’s youth, whose perceptions often differ from the rest of society. In the presidential election in the United States far more young people voted democratic than did the rest of the population.

- Many young people take responsibility; they have a global worldview. They see the connection between poverty, environment, justice and war.

They see that we need not only technological change, but also systemic change, she points out.

The pioneer spirit is found in the individual

The Nigerian environmental activist, author, poet and architect Nnimmo Bassey is one of the speakers at the conference taking place in Oslo in February. He was awarded the Rafto Prize in 2012, and in 2009 Time magazine named him one of the “Heroes of the environment” . Bassey agrees with O'Brien that an individual has considerable power.

- An individual can demonstrate that things can be done differently and she can influence others into making changes. Thus we can achieve deep systemic change.

It is risky to stand out, and to be among the masses can feel safe and comfortable, but it is often in the individual that we find the pioneer spirit, says Bassey.

However, it is important that individuals influence others, he points out.

- Many good ideas lie buried in cemeteries, because those who came up with them failed to communicate them and enthuse other people with them.

Bassey is an influential voice in Nigerian and African organizations. In Nigeria, he has spoken out against powerful oil and gas interests. He believes that grassroots organizations are vital for creating systemic changes.

- Grassroots movements are essential for the formulation of environmental policy and conduct, because they can go deep into the causes of social problems without being limited by short-term political considerations, Nnimmo Bassey says.

We need a broader understanding

Karen O'Brien believes that we need a broader understanding of how change occurs. More people need to understand that it is not only political parties, organizations, governments or leaders who can change systems.

- Most often systemic change starts from the bottom. In recent years, dedicated individuals have been working together with cities, schools, businesses, municipalities and states to change energy systems and investment practices, among other things. Such initiatives may look small at first, but they could end up affecting the whole world. Many people do not know that we can influence others through our social networks.

A prevailing view can be turned around quickly if ten percent of us argue for an alternative.

O'Brien believes that today’s world system is unstable. One telltale sign are the large and growing disparities between rich and poor. Another sign is that the impacts of climate change are beginning to show themselves through the increased risk of flooding and extreme weather. There is room for change in the systems we have today, and change will happen, she points out.

- I believe that the ability to create change exists in everyone. Just as we want to be loved, we want to make a difference. But often we are not in touch with that part of ourselves. When we see flood victims in India on TV or poverty in Oslo, it is easy to feel powerless, easy to think that we cannot act. But we can, says Karen O'Brien.

Opening session on Wednesday with lectures by Karen O'Brien and Nnimmo Bassey, as well as lecture and panel discussion on Saturday is open for everyone interested. The other sessions are for registered participants only.

Research at the department