Do not let the fear of terror rule. Other dangers threaten democracy.

Right-wing terrorists do not pose the greatest far-right threat to liberal democracies, according to C-REX scholar Jacob Aasland Ravndal. 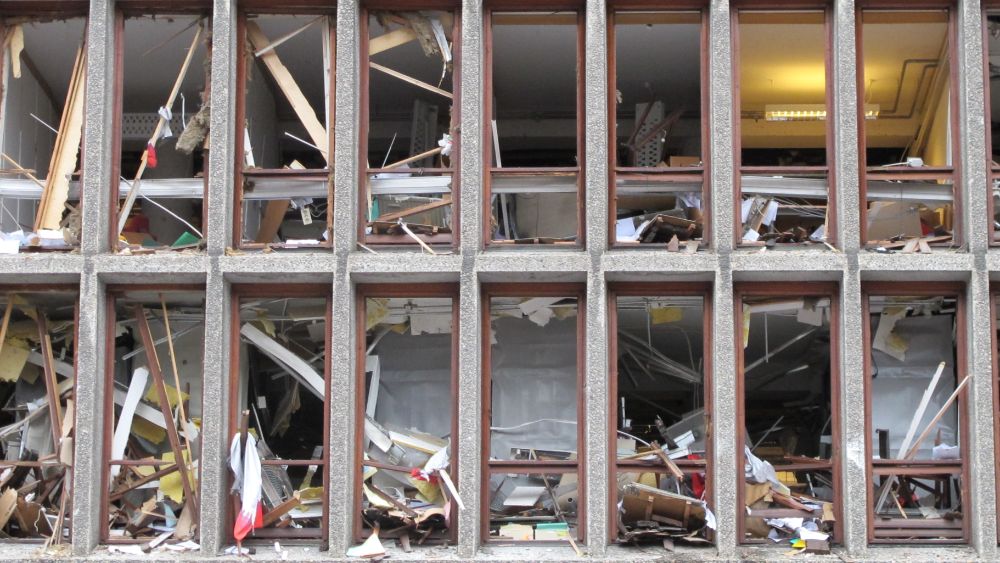 Bombed out building after the 2011 terror attacks in Oslo. Image by Cato Hemmingby.

This article was first published in the Norwegian newspaper Aftenposten, and is based on a lecture delivered at the conference 10 years after 22 July: Knowledge status and knowledge needs, 10 June 2021.

Ten years have passed since the 22 July terrorist attacks. This provides an occasion to reflect upon the kinds of threats the far right poses today, and how these threats have evolved since 2011. On that note, I would like to highlight three points.

Terrorism is characterized as the weapon of the weak and the desperate. Those without power or ability to shape society through lawful means. Those who must exploit our inherent ability to let our fears overrule our actions. This is why we, as a society, face a dilemma when dealing with terrorist threats.

One the one hand, we must not be naïve and think that nothing bad can happen to us, as that might stop us from preventing dangers that otherwise could have been prevented. On the other hand, we should not overestimate the danger, become paralyzed by fear, or change our behavior in ways the terrorists want us to. In so doing, we become victims to terrorist logic of fear.

Fear of terrorism flows from two main sources. The first is the terrorists’ ability to communicate likelihood of repeated attacks. That is why, on the 22 of July, the terrorist claimed that other terrorist cells were ready to attack. But that was not true. It is almost never true. Nearly all extreme-right terrorist attacks are carried out by lone actors incapable of carrying out additional attacks in the future.

A second source of fear lies in ourselves and how we deal with terrorist threats. Here, the media plays a crucial role.

The media has a well-known tendency to overreport negative news and exaggerate danger, including terrorist threats. It is therefore important to remember just how low the risk of being struck by terrorism actually is.

These numbers do of course not help those who have already been affected by terrorism, such as victims and relatives from the 22 July terrorist attacks. This is why a fundamental part of states’ efforts against terrorism should be the continued support of victims and their relatives, as long as necessary, for life if needed.

Sometimes, reactions to terrorism can cause more harm than the terrorist attack itself. Reactions to 9/11, the most deadly attack in modern history, has caused far more victims than the approximate 3000 people who were killed on the day of the attacks. For example, it has been estimated that the increase in car use as a result of people’s fear of flying after 9/11 has caused more fatalities than the attacks themselves. In addition comes more than 100.000 innocent victims who died in the wars in Afghanistan and Iraq.

Still, most people prefer intrusive and all-encompassing measures to counter terrorism, even though research shows that such measures can have opposite effects. For a politician aiming to be re-elected, it may be tempting to satisfy this desire to "catch the terrorists" instead of taking more effective - but less popular - measures, such as social care or a safe pathway out of extremism. Again, fear rules - an unfortunate interplay between the fear of being attacked and the fear of not being re-elected.

These observations apply to all forms of terrorism. What about terrorism from the extreme right?

The evolution of the extreme-right terrorist threat

When trying to measure how levels of right-wing violence have evolved over time, the number of fatal attacks per year is our most reliable measurement. These kinds of attacks are widely covered by the media, and we therefore know about nearly all of them.

Data from both Western Europe and the United States show decreasing numbers of fatal attacks per year since 1990.

Furthermore, the 22nd of July stands out as one of relatively few extreme-right mass-casualty attacks in Western Europe over the past 30 years, and was by far the deadliest.

A disturbing trend among today's right-wing extremists, however, is repeated online calls to carry out mass-casualty attacks.

If more people take such calls seriously, the threat situation may change, and we will see more mass-casualty attacks in the future.

In addition to the mentioned mass shootings in Germany in 2016 and 2020, we have also seen two failed attempts (although both attacks caused fatalities): the synagogue attack in Halle (Germany) in 2019, and Philip Manshaus' attack on the Al-Noor mosque in Bærum the same year, where the goal was to kill as many Muslims as possible.

These attacks were carried out by so-called lone actors - that is, people who plan and carry out attacks without direct involvement from others.

In other words, there are no well-organized extreme-right terrorist groups active in Europe today. This stands in contrast to Islamist terrorism, which is sustained by real organizations, such as Al Qaida and IS, with access to money and safe havens from which they can plan their attacks.

Islamist terrorists are also behind considerably more mass-casualty attacks in Europe than right-wing extremists are. According to data from a forthcoming publication by the Norwegian scholar Peter Nesser, Islamist terrorists have carried out 20 attacks with more than three victims since 1995, resulting in 611 fatalities.

However, this does not mean that far-right violence is trivial or, for that matter, less worrying than Islamist terrorism. But the real threat to democracy does not primarily come from the violent extremists – non-violent radical right forces affect more people in more inconspicuous ways.

The largest threat from the far right today does not come from the terrorists, from the weak and desperate. On the contrary, it comes from an increasingly empowered global political movement with growing self-confidence and influence in countries such as Hungary, Poland, the United States, Brazil and India.

This movement does not have to use terrorism to gather support for its revolution. Instead, they exploit social media, fake news, conspiracy theories, and people's inherent fear of foreigners to garner votes through legitimate elections, before dismantling democratic institutions from within.

In addition, they pursue policies aimed at silencing political opponents and targeting ethnic, religious and sexual minorities in particular through the curtailment of fundamental human rights.

Norway can also be affected

Thus far, Norway has mostly been spared this development. But the movement is so large and influential that one cannot rule out the possibility of Norway being "affected" at some point. Should that happen, we are fortunately equipped with valuable resources that can be crucial in meeting such a threat. These include high trust in our governments and in one another, a high level of education, a well-functioning justice system, an active civil society, comparatively low social inequality, a rewarding public debate and a free and independent press.

Such resources give us a comparative advantage. But we cannot take them for granted, and we cannot take for granted that they in themselves will be sufficient.
My recommendation in the face of today's threat situation is therefore twofold.

• First, we must not only focus on or exaggerate the, after all, limited terrorist threat, but rather acknowledge that the real threat to democracy comes from elsewhere.

• Second, when confronting this non-violent threat, we must apply those measures best suited to defeating it.

A good place to start may be to find liberal-democratic answers to the societal challenges that the far right seeks to exploit – be it lack of integration, perceptions of insecurity, or contempt for politicians.

For more information on extreme-right terrorism in Western Europe, read the newly published RTV Trend Report 2021, which presents data on severe right-wing attacks and plots that occurred in Western Europe in 2020.