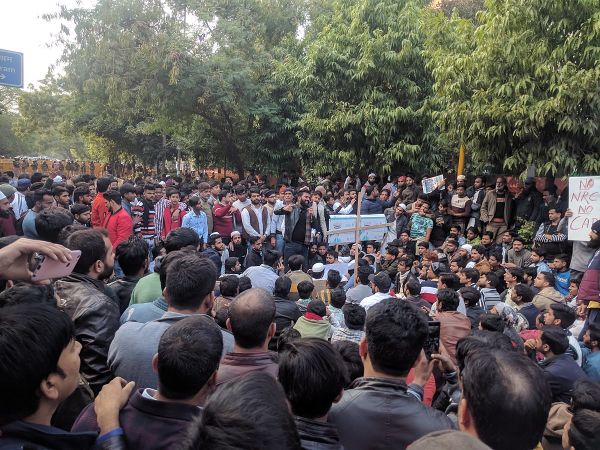 Experts are calling the ongoing violence in Delhi the beginning of a pogrom comparable to the Gujarat riots in 2002 and the 1984 Delhi riots, both which witnessed thousands of deaths. Communal violence—a prevalent term used to refer to religious violence between Hindus and Muslims—is certainly not a new phenomenon India; it has a deep history on the subcontinent that dates back to ancient times. What makes the current situation in Delhi so unique, however, is that this is the worst levels of violence in India’s capital in decades. But why should this be of particular concern to scholars of right-wing extremism?

In December 2019, the Indian government passed a legislative bill called the Citizenship Amendment Act (CAA), which guarantees fast-track citizenship to persecuted religious minorities from the neighbouring countries of Pakistan, Bangladesh, and Afghanistan. The bill defines such minorities as those of Hindu, Sikh, Buddhist, Jain, Parsi, and Christian faith, but excludes Islam (despite the fact that there are persecuted Muslim sects across the border). In response to the passing of this legislation, members of Indian civil society, mostly Muslim but also Hindu allies, have organized protests against the CAA.

The passage of the CAA largely reflects the ruling political party of India, the Bharatiya Janata Party’s (BJP, or Indian People’s Party) implementation of a Hindu nationalist agenda. According to the BJP’s official party ideology, India should strive towards a majoritarian ethno-nationalist state, i.e. a Hindu state. This is in stark contrast to the country’s founding principles of secularism and respect for religious diversity.

The BJP constitutes part of a larger umbrella of Hindu nationalist organisations that operate to advance the idea that India should be a Hindu state. Most notable is the Rashtriya Swayamsevak Sangh (RSS, or National Volunteer Organization), which was founded in 1925 as a grassroots paramilitary organization. The founders of the RSS were greatly inspired by events unfolding in Europe at the time—namely, Fascist Italy and later Nazi Germany. In the case of the former, Hindu nationalist ideologies travelled to meet Mussolini and were influenced by the modus operandi of the ‘Blackshirts’, adopting its structure and strategies which continues to this day. For the latter, there existed an extensive network of correspondences with ideologues, both through private letters and newspaper editorials, and even covert operations during the Second World War. Relationships with both regimes also resulted in institutions that were established to recruit local students in disseminating propaganda and foster study exchanges.

Prime Minister Narendra Modi was himself a young recruit into the RSS at the age of 9, and quickly rose through the ranks of the Hindu nationalist political apparatus, culminating in the BJP. He first gained prominent recognition as Chief Minister of the state of Gujarat in 2001. Only a few months after taking office, riots erupted between Hindus and Muslims which resulted in thousands of deaths, overwhelmingly that of Muslims. International NGOs such as Amnesty International and Human Rights Watch have documented state complicity in the riots, with officials and law enforcement permitting Hindu nationalist actors to conduct attacks in Muslim neighbourhoods. Modi was accused of allowing such atrocities to carry out, and although has been cleared of involvement by the Supreme Court, his role in the riots still remains contested within public opinion today. Until recently, Modi was banned a travel visa to the US, UK, and several European countries following his alleged complicity in the riots.

Since Modi became prime minister in 2014, and was re-elected with an even greater majority in 2019, Hindu nationalism has steadily increased in popularity in India. We have witnessed not only a rise in violent incidents against non-Hindus (especially in so-called cow vigilante lynchings directed against Muslims), but significantly, Hindu nationalism has become ‘mainstream’ as Modi and the BJP have established their governmental mandate. Indeed, Modi remains a popular, charismatic figure: his appeal is not just his background of humble beginnings and his ascent of social mobility, but more so is his vision for India in the 21st century. Modi first rode a populist wave to electoral victory in 2014, gaining visible support amongst India’s growing middle class, urban-based youth, many of whom are employed in the technology sector. An ardent user of social media, Modi promotes a message of authenticity, transparency, and accessibility; he embodies an image of a future India that is a techno-economic powerhouse. At the same time, Modi himself does not proselytize hardline Hindu nationalist ideology in public speeches, preferring instead to advocate a message of economic development and growth.

A spiral of unrest

At the helm of the BJP is a massive army of keyboard warriors called ‘Internet Hindus’ or ‘Cyber Hindus’, who promote pro-Modi and Hindu nationalist content online, whilst simultaneously spreading anti-Muslim messages. An offline effect of these so-called BJP IT cells occurred earlier this month when a shooter fired into a crowd of protestors at a university in Delhi, shouting Hindu nationalist slogans whilst livestreaming the attack on Facebook. It was later discovered that the shooter had developed a considerable social media network on Facebook and on WhatsApp groups with prominent Hindu nationalist organizations and individuals. Further, the video of the attack reveals a number of policemen watching the event unfold as spectators, failing to intervene on behalf of protestors.

On Sunday, violence began erupting in Delhi as Hindu mobs descended upon CAA protestors in an attempt to ‘clear’ protest sites, following a prominent BJP politician’s incitement to violence at a rally that day. BJP and RSS leaders have taken to social media since, calling for protestors to be ‘taught a lesson or two of Indian laws’. Events have escalated, resulting in—at the time of writing—38 deaths (mostly Muslims) thus far, with hundreds injured. Modi did not comment on the situation until Wednesday, tweeting for ‘peace and harmony’.

The Delhi riots and the international far right

The Delhi riots have received much media coverage and commentary. Missing from the analysis, however, is the response of global far right actors. On the one hand, far right Twitter accounts are spreading narratives that Islamist terrorists are instigating violence against Hindus in the name of jihad, and that the political left and mainstream media are ‘Hinduphobic’ in their representation of the violence. More concerning, though, is that users of fringe websites such as 4chan are circulating similar information that portrays Muslims as invaders of India, and calls for Hindus to further escalate in the targeting of Muslims. Some posts even criticise those based in Europe for not having the courage to enact similar levels of violence against Muslims.

Overall, the situation in Delhi is disturbing, not least because such acts undermine democratic values of tolerance and human rights. As India remains in the international spotlight, we are witnessing the effects of when an extreme right party becomes mainstream.

But perhaps more serious is how far right supporters around the world are portraying the violence using conspiratorial narratives, as well as expressing admiration of and inspiration for such attacks. If we are to follow the logic of the latter, the global connection between the extreme right in India and the West is no longer just ideological. It is potentially deadly.

By Eviane Leidig
E-mail this page