The U.S. Capitol storming was a victorious display of white supremacism. What should we be watching in the near future?

With the siege on the U.S. Capitol Building, right-wing extremists with disparate agendas and goals seized a political opportunity to move into violent action and accelerate social chaos. While there are still many unknowns, six questions are likely to be key to what will happen in the U.S. in the near future. 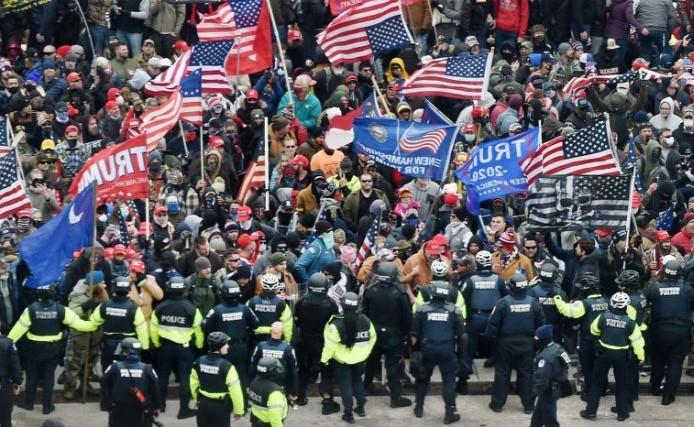 In the violent, public insurrectionary attack on the U.S. Capitol Building on January 6, 2021, right-wing extremists seized a political opportunity to enact their violent agendas alongside a mob of QAnon conspirators, hyper-masculinist combatants; people agitated by COVID closures and gun control; ex (and maybe current) military and law enforcement; fervent Trump followers; evangelical Christians; and adherents of other adjacent right and far-right movements.

As far as we know, participants’ motives varied. Some thought they could keep Trump in office, some were venting rage about COVID restrictions and fear of gun control in a Biden administration. Virtually all were men, and the hyper-masculinist expressions of entitlement – to control politics, to take over space, to dominate the conversation - were loud and clear. And woven throughout was white supremacism, from the presence of visible, notorious white supremacist extremists to the coded insistence of the many that it is only the votes of whites that should matter in national elections.

What did they want to accomplish? Some wanted to stop a national election, which they nearly did. Others seem to be intent on assassinating politicians they saw as enemies. The most ideologically fluent white supremacist extremists among them likely saw this as an opportunity to accelerate social chaos and hasten race war, ideas fed by such neo-nazi tracts as James Mason’s Siege and William Pierce’s (pseudonym Andrew Macdonald) The Turner Diaries.

Remarkably and catastrophically, their disparate motives and agendas merged in a common spasm of violent action that was barely checked by a law enforcement and Capitol security force with members now under suspicion for complicity with the insurrectionists.

As I write this, we are just learning what happened in the lead up to Jan 6 and during the siege. Whether Republican congresspersons were implicated in the planning is alleged but not yet determined. The immediate future is no less clear, although there are multiple threats of widespread violent attacks against the national and all 50 state capitols, the Biden inauguration, and other places in the wake of what white supremacists are celebrating as a victorious display on January 6.

There are too many unknowns to predict the future with any confidence. The extent to which white supremacist extremists coordinated the violence on Jan 6 is just starting to be revealed. A hunt for those involved is underway and arrests are beginning. But whether this will dent the momentum of white supremacist extremism or simply create new martyrs to the white supremacist cause is unknown. Tech companies have exerted some immediate controls, expelling Trump and rooting out QAnon and other political disinformation. But whether tech companies are committed to sustainable policies that will prevent them from becoming platforms for accelerating violent subcultures in the future is unclear. What will happen with QAnon and adjacent conspiracy cultures opposed to COVID closures and vaccinations when Trump leaves office & has less ability to reach followers is also up in the air. We know that conspiracy-geared movements can implode quickly when they lose their leaders. But they also can morph into new forms, absorbing other conspiratorial ideas & directions.

What should we be watching in the aftermath of Jan 6? Questions that are likely to be key to what will happen in the U.S. in the near future include:

By Kathleen Blee
E-mail this page