The Georgian far right failed its electoral debut. But its season may not be over

Taken together, the emerging groups of the Georgian far right obtained less than 5% in the October 2020 elections to the national Parliament. But limited electoral success does not mean that the far-right has limited political power, in Georgia and elsewhere in the world. 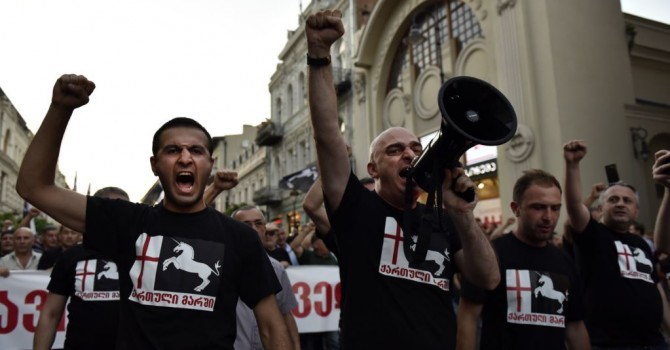 On October 31, 2020, while the world was anxiously preparing for presidential elections in the US and the second wave of COVID-19 lockdown, Georgia was going through arguably one of the most important elections in its recent history.

These would be the first elections after the much-contested reform in 2019. For almost two decades after the 2003 Rose Revolution, when Georgia was seen by many as a democratic frontrunner in the region, ruling parties in power have had extensive control over state resources. The resulting single-party tradition in the country has led to growing public discontent.

The reform aimed at changing the single-party tradition. According to the new electoral law, no party will be able to form a government on its own, unless it receives more than 40% of votes. In addition, the law makes it less likely for any political group to gain enough power to single-handedly modify the country’s constitution. As a result, the law prevents the concentration of power in the hands of any party.

The reform also makes it possible for small parties to enter the parliament. The law removed the 5% electoral barrier, so any group with 1% of votes can obtain at least one seat in the parliament. As a result, many saw the 2020 parliamentary elections as the first chance to change the country’s deeply polarized politics.

On the flip side, many also feared that without the 5% barrier, the recently emerging far-right groups would manage to get in the parliament, something that had been unreachable for them until now. The Georgian far-right movement has been mostly extra-parliamentary, with only one party, the Alliance of Patriots, represented in the parliament. Lacking access to formal politics, far-right groups have been active on the streets, organizing many, often violent, demonstrations. Many feared that obtaining parliamentary seats in the 2020 elections would make these groups less marginal and more influential in Georgian politics.

These fears did not materialize. According to official results, the far-right Alliance of Patriots party obtained even fewer votes than in the previous elections, while two other far-right groups, Georgian Idea and Georgian March, gained no seats.

The election results are contested. Many opposition parties argue that the elections were rigged and have been demanding vote recount. Regardless, the performance of far-right parties is not really debated: in terms of sheer numbers, it seems that the far right failed to live up to its own expectations.

Many rushed to celebrate the failure of far-right groups. Indeed, it seems that the far right missed the window of opportunity to gain access to formal politics.

But this does not mean the end of far-right politics in Georgia.

Like similar movements in Central and Eastern Europe, the Georgian far right has been more active in the streets than in formal politics. As far-right groups are reactionary and focus more on identifying problems than solving them, they might enjoy more public support in street-level actions against those framed as enemies, like LGBTI persons, NGOs, immigrants, or anyone seen as liberal or progressive.

Georgian far-right groups influence politics in two ways: by creating noise, or attracting media attention with eccentric and violent behavior, and by cooperating with large and influential parties. These actors rarely distance themselves from the far right. Quite the opposite: both the ruling party and major opposition parties have submitted legislative initiatives drafted by far-right actors to the parliament, and might continue to do so. Thus, the far right can still influence politics, even if it fares poorly in elections.

An electoral breakthrough could have been critical because far-right parties in parliament sometimes voice the demands of the general far-right movement and discourage street-level violence. Without access to the parliament, street-level politics and cooperation with mainstream parties remain the only option.

If anything, lack of access to formal politics might make these groups more radical, considering that public opinion in Georgia largely aligns with far-right ideology. Opinion polls show that anti-immigration, anti-LGBTI and ethno-religious nationalist opinions are widespread in the society and public trust towards official institutions and democracy in general is declining.

The biggest challenge far-right groups pose lies in the normalization and mainstreaming of extreme and radical ideas. This can happen even if the far right lacks access to formal politics and is limited to street-level action.

In Georgia, radicalizing public opinion and ambivalent attitude of mainstream political parties can enable more far-right influence on political processes. Beyond Georgia, too, we should not rush to declare the far-right’s electoral loss as the end of far-right politics. It is certainly tempting to see electoral failure as decisive: when Donald Trump lost the presidential election, some declared the end of an era for the far right around the world. Similarly optimistic were the reactions to election loss by the far right in Austria, Portugal, and beyond. But limited electoral success does not necessarily mean limited political power.

By Tamta Gelashvili
E-mail this page