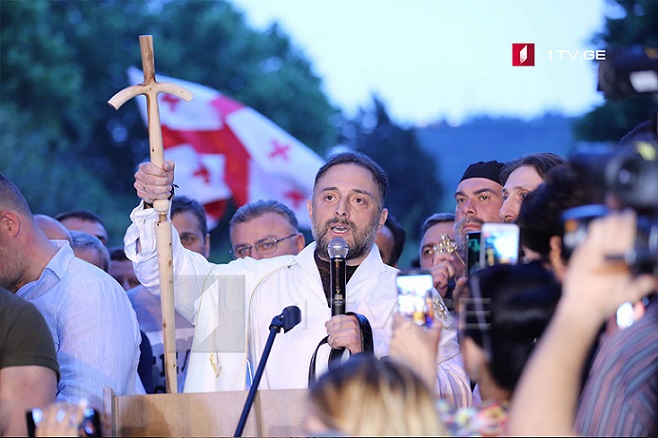 In June 2019, Georgian millionaire Levan Vasadze, dressed in traditional attire and holding a handmade cross-and-cudgel-in-one, addressed a men-only demonstration in the center of Georgia’s capital Tbilisi, announcing the creation of anti-gay vigilante groups ahead of the approaching, first-ever Tbilisi Pride. Receiving no security guarantees from the state and changing plans multiple times amid death threats, Tbilisi Pride organizers held a toned-down version of the intended March for Dignity in front of the Ministry of Internal Affairs, located at the capital’s outskirts.

Vasadze is, to be sure, not the first or the only eccentric Georgian millionaire, keeping in mind that just last year, oligarch Bidzina Ivanishvili, the chairperson of the ruling Georgian Dream party, ordered the transportation of about 150 trees from different parts of Georgia to his lush garden, changing infrastructure and cutting down another 3,800 trees to facilitate the rather surreal transportation process. Vasadze, however, seems to be emerging as the leader of the Georgian far right, not least because he has links not only inside Georgia (with the influential Orthodox Church), but also abroad: a proud host of the 10th World Congress of Families in Tbilisi in 2016 was also among the few international speakers invited to the 13th  World Congress of Families this year, together with representatives of the Brazilian, Italian, Thai, and Hungarian Ministries of Family and (Christian) religious organizations from Russia, Syria, and Italy.

Vasadze emerges as the leader of a movement that can be considered as emerging itself: while ethnonationalism and nativism have been as common in Georgia as in other post-Soviet countries, the far-right social movement has especially been gaining traction for the past five years. The parliamentary elections approaching in 2020 create a window of opportunity for far-right actors to gain access to mainstream politics

Georgia’s first years of independence after 1991 were tumultuous, scarred with a civil war and ethnic conflicts. More than a decade after, the 2003 Rose Revolution marked the beginning of the so-called wave of “color revolutions” and Georgia was regarded by many as a liberal beacon of hope in the post-Soviet space. The new, pro-NATO and pro-EU government of the United National Movement (UNM) party set the country onto a fast-forwarded liberalization path.

Although the UNM laid foundations to a liberal-democratic state, it gradually went authoritarian, tightening the grip over freedom of expression. Thus, in the post-Rose-Revolution period, any activism, including far-right activism, was rare. As the UNM steadily lost public support, the 2012 parliamentary elections led to a change in government, bringing the Georgian Dream coalition, led by oligarch Ivanishvili, to power.

Georgian Dream was a coalition of diverse political actors, united in their aim to replace the UNM through elections. After achieving that, however, the ideological diversity manifested in an eclectic track record, with some members retaining the pro-EU and pro-NATO path of the UNM, and others flirting with – or sending mixed messages to – the far right. The recent arrest of extremist activists for violence during rallies illustrated this ambivalence: some Georgian Dream members condemned violence, while others were guarantors for activists’ release on bail.

From 2012 onwards, the political space in Georgia has been extremely polarized, with the former ruling party, the UNM, on one end, and the current ruling party, the Georgian Dream, on the other. In this polarized environment, nationwide surveys show consistently low levels of trust towards political parties, state institutions, the media, and NGOs. Notably also, the majority is conservative and ethnocentric, with homophobic, anti-abortion, anti-immigrant opinions, and stably high levels of trust towards the Orthodox Church and its leader, the Patriarch.

These views make the Georgian society a fertile ground for far-right framing, especially after the 2014 Georgia-EU Association Agreement that brought about legislative reforms, including the anti-discrimination law (2014), the new domestic violence law (2016), and the sexual harassment law (2019). These reforms were perceived as “liberal threats” to the “traditional values” venerated by the Georgian society.  In the wake of the so-called refugee crisis, immigration also became framed as a threat and subject to intense debates, particularly when the 2016 visa-free agreements between Georgia and several Middle Eastern countries increased tourist inflow and fueled the perception of uncontrolled immigration.

The emergence of the far-right movement dates back to 2013, when about 30 activists, aiming to mark the International Day against Homophobia and Transphobia for the first time in Georgia, were hunted down by thousands mobilized by the Orthodox Church. The far-right movement that included no distinct groups by that time has been expanding since.

Perhaps because the movement is still relatively new, it remains fragmented and fluid, even so that it is sometimes difficult to link certain activists with any particular group. Some belong to different groups simultaneously or move from one group to another. The relatively enduring members of the far-right political family in Georgia include the Alliance of Patriots, a radical right party with several seats in the parliament, and a few extra-parliamentary groups, most notably, Georgian Idea, an Orthodox Christian group and Georgian March, a radical anti-immigration group. The movement also includes smaller youth groups that appear and disappear intermittently: e.g. the militaristic Georgian Power, most active during 2016-2017, and the self-proclaimed fascist group, Georgian National Unity, more visible during 2018.

In the fragmented movement, each actor seems to be trying to distinguish itself from others. Ideological differences translate into internal power dynamics: far-right actors that draw on Orthodox Christianity and voice more mainstream views have more power and visibility, while those with more extreme and fascist rhetoric are more marginal.

Despite this internal diversity, these actors share nativist views and anti-Islam, anti-feminist, and anti-immigration attitudes, perhaps better summed up as anti-democratic values that are common among far-right movements. In an attempt to adapt their rhetoric to public opinion, they emphasize distrust towards the media and political actors, protest against perceived interference of foreign actors, such as George Soros, in Georgian politics and condemn immigration and LGBT visibility, labelling the two respectively as “Muslim invasion” and “gay propaganda.” Similarly to reactionary movements in other countries, the far right in Georgia often rallies in counter-demonstrations to liberal activists and focuses on framing problems and enemies, rather than on finding solutions.

The far-right in Georgia is far from developing into a powerful movement that would meet the societal demand for exclusion-oriented policies. Nevertheless, far-right protest dynamics in 2014-2018 show a steadily escalating mobilization: over time, as the movement expands and diversifies, protest events become larger and more violent. This applies not only to extra-parliamentary, street activism, but also online activism: Facebook is used most often for internal and external communication, and Facebook pages with illiberal, right-wing extremist content seem to multiply exponentially.

If public opinion does not change and the Orthodox Church continues to enjoy noticeably higher levels of trust than any political institution, it is only a matter of time before another actor – perhaps the charismatic and eccentric knight in shining armor – manages to mobilize the far-right movement further. In 2020, parties with more than 0.67% of votes will have at least one seat in the parliament of Georgia, meaning that far-right actors that have lacked access to political decision-making thus far might have more political opportunities. It remains to be seen, then, whether the 2020 elections conform to the “pressure cooker theory” where a strong far-right party voices the grievances of extreme and radical actors, discouraging them from street-level violence, or whether mainstream political actors continue to compete with far-right groups in voicing exclusionary initiatives.