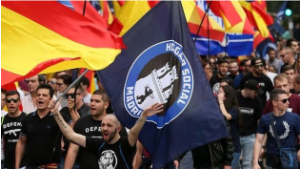 Demonstration by Hogar Social in Madrid (2016)

In 2018, the Spanish police arrested a 63-year-old man with far right views on suspicion of plotting to assassinate Prime Minister Pedro Sánchez. Similarly, in February 2019, the police arrested another middle-aged man (44-year-old) for inciting to hate and violence against Muslims and immigrants on Facebook/social media. At his home, the police found numerous weapons with either neo-Nazi inscriptions or other ultra-right symbols. Furthermore, on several occasions throughout 2019, far right extremists violently attacked left-wing activists.

Clearly, far right violence still constitutes a challenge in contemporary Spanish society. In fact, a recent report from Center for Research on Extremism (C-REX), University of Oslo, shows that few other countries in Western Europe has experienced as much severe right-wing violence as Spain. The report is based on the unique Right-Wing Terrorism and Violence (RTV) dataset, developed by C-REX, which aims to cover all severe forms of right-wing violent attacks and plots in Western Europe since 1990. This includes all cases in which the perpetrator(s) appear determined or willing to inflict deadly or physically disabling injury on the victim(s). Because there will be many less severe right-wing attacks, the dataset only covers the ‘tip of the iceberg’. However, it does so in a systematic way, which means that we can compare levels of violence over time and across countries.

The report shows that while many countries have none or very few cases of severe right-wing violent attacks or plots in 2019, there were at least 16 such events in Spain. Almost half of the events took place in Barcelona and surrounding towns, including Sant Boi de Llobregat, El Masnou, Mataró and Badalona. However, there were also events in or close to other major cities like Madrid, Valencia and Mallorca (by two German neo-Nazis), as well as in smaller places.

Far right violence in Spain is typically more organized than in the rest of Western Europe, especially when compared to other countries with high levels of violence like the UK and Germany, in which perpetrators are more often considered to be so-called ‘lone actors’ . In fact, not only was ‘lone actors’ the most common perpetrator type in Western Europe as whole in 2019, the long-term trend is that right-wing attacks with a fatal outcome are increasingly carried out by this perpetrator type. To be sure, many of these perpetrators are ‘lone’ only in a relative sense meaning that they are inspired by others, such as Brenton Tarrant who killed 51 Muslims in Christchurch (New Zealand), or even affiliated to organizations like CasaPound Italia. Yet, they differ from other perpetrators because they prepare and carry out attacks alone at their own initiative, making them more difficult to prevent.

In Spain, however, several cases of severe right-wing violence in 2019 involved a group of perpetrators. This includes the brutal beating of two young catalan independentists, in December, by a group of 15 people and the attack by ultra-right groups on an emergency center for refugees, housing 50 unaccompanied minor immigrants, in July, resulting in four injured. It also includes two members of the neonazi group El Galéon chasing a couple in the streets before beating the man unconscious, as well as the homophobic stabbing of a 23-year old boy by two right-wing extremists.

The most frequent target is the left

Spain also differs from another general trend of far right violence in the sense that perpetrators more frequently target political opponents rather than immigrants, religious minorities and ethnic minorities. In Western Europe in general, and particularly in Northern Europe, victims of far right violence tend to be ethnic and religious minorities, groups that far right perpetrators perceive as unwanted ‘aliens’ and therefore as legitimate targets. In recent years, Muslims in particular have become a more common target, though there are also examples of attacks against the Jewish communities (as in Halle in Germany in late 2019). In Eastern Europe, which is not yet covered by the RTV dataset, other reports show that the Roma minority is a frequent victim of right-wing violence.

In Spain, far right perpetrators usually attack political opponents, anti-fascists and independentistas in particular, though there were at least two severe attacks on refugee reception center for minors. In 2019, several attacks seem to target people and activists supporting Catalan independence in particular. The obvious reason is the conflict in Catalonia following the independence referendum in October 2017.

In March, two members of a Catalan pro-independence and left-wing organization, were attacked by 20 hooded ultra-right people. A month later, two right-wingers, who were yelling «Viva España» and doing fascist greetings, attacked a male member of the pro-independence and left-wing coalition Front Republicà, while he was hanging up electoral posters at night. Moreover, the event in the streets of Ferrol in March 2019, in which 8-10 fascists attacked and severely beat a man, the victim was member of the left-wing independentist party Causa Galiza. Before attacking him, they allegedly shouted ‘rojos de mierda, hijos the puta’ clearly indicating that they knew the political orientation of the victim. In some cases there seemed to have been a combination of homophobic and anti-leftist views that motivated the attack.

In general, the report shows that although the same countries continue to struggle with relatively high levels of right-wing violence, the nature of this violence varies considerably from country to country. While lone actors and premeditated attacks are most common in Northern Europe, right-wing violence in Southern Europe tends to be more organized and, particularly in the case of Spain, often spontaneous. Moreover, while ethnic and religious minorities are more frequently targeted in Northern Europe, and increasingly also in Southern European countries like Italy and Greece, far right violence in Southern Europe continue to target political opponents in general and, in Spain in 2019, the independentistas in particular.

The fact that this territorial conflict follows a traditional left–right conflict, with a number of independentistas also involved in left-wing or antifascist activism, shows why we need to explain the presence of far right violence differently depending on which European region we are looking at. In short, in Northern Europe, relatively high levels of far right violence seem related to the combination of high immigration, low electoral support for anti immigrant parties, and extensive public repression of far right actors and opinions. In these countries, the extreme right seems able to mobilize new followers and to motivate terrorism and violence, at least partly because the elites have been predominantly pro-immigration and perceived as hostile towards people with anti-immigration concerns. This was largely the case in Germany, Sweden and the United Kingdom between 1990 and 2015.

In Southern Europe, however, relatively high levels of far right violence seem more correlated with the combination of socioeconomic hardship, authoritarian legacies, nationalist demands and extensive left wing militancy and, in some cases, terrorism. This combination intensifies an already polarized left-right divide, which occasionally result in more far right violence. This is the case in not only Italy and Greece, but certainly also in Spain.

A Spanish version of this op-ed was published in Público on June 14, 2020.