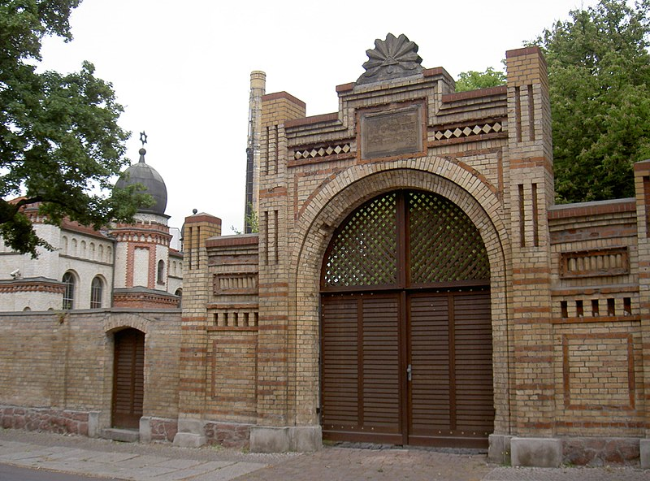 Photo by Allexkoch on Wikimedia Commons

The Jewish community in Halle is approximately 700 members strong. The synagogue building is used since 1948 after the old building dating back to 1894 was destroyed by the National Socialists in 1938 during the November pogroms. Around 80 persons were celebrating in the building. Stephan B. parked directly in front of it, hoping to find the door open. As he realized that this was not the case, he tried to force entry using an improvised explosive device, but failed. The fiasco made the attacker nervous. He started to walk up and down the wall that separates the Jewish cemetery from the main street, dropping shells while frantically reloading his rifle to try to blast the door open. As a woman approached him to complain about his car standing on the sideway, he shot her in the back and then again multiple times while she was already laying down. His gun jammed when he tried to shoot a second person who was attempting to help the dying woman. Swearing and realizing that he “totally failed”, he decided to drive to a nearby Turkish kebab restaurant, where he killed another person. After exchanging gunfire with police officers, he tried to escape and changed cars, and was eventually arrested later that day.

We know all these details not because official police reports and press statements have already reconstructed the incident using meticulous evidence analysis and witness reports. The perpetrator himself was carrying a camera mounted on his helmet during the attack, with which he live streamed the shooting on the online video gaming platform Twitch. According to the platform itself, the 35 minutes live stream was watched by 5 people and an automatically-produced recording by about 2.200 users. The account was created only two months prior to the shooting and streamed only once, suggesting the only purpose of it was the attack.

Stephan B. was well-prepared. His car was filled with explosives, ammunition and Molotov cocktails, as well as technical equipment. Undoubtedly, the death toll would have been much worse if the specially reinforced doors of the Jewish community building had not withstood his attack. We do not know much about Stephan B.’s past and radicalization process yet. It was reported that he was not known to local police. It also appears that he acted alone – even though he clearly saw himself as part of a global online community, which he tried to address and impress with his deeds. While the coming days, weeks and months will bring more information about the perpetrator’s biography and potential links to other persons, groups and networks, the information available so far allows some first commentaries on the significance of this extreme right-wing and anti-Semitic terror attack.

The Halle synagogue attack did not come out of the blue. Over the past decades, right-wing terrorists in Germany have many times plotted to attack the Jewish community or carried out violent acts against it. To name only three examples: in 1977 the right-wing terror group “Otte” was prevented in carrying out an attack against a synagogue. In 1980, a neo-Nazi and member of the “Wehrsportgruppe Hoffmann” assassinated Rabbi Shlomo Levin and Frida Poeschke. In 2003, a group of nine neo-Nazis plotted a bomb attack on the foundation stone ceremony at the construction site of the new Jewish community center in Munich. There are, sadly, many more attacks against the Jewish community in Germany and the long list includes attacks by perpetrators who have never been identified, such as the arson attacks against the Jewish community centre in Munich in 1970, which killed 7 persons, and the 1975 parcel bomb attack against the president of the Jewish Central Council of Germany, Heinz Galinski. In addition, several attacks were committed by non-right-wing extremists, such as the 1972 Olympic attack in Munich, and the 2000 arson attack against the synagogue in Düsseldorf, among others.

Violent attacks on the Jewish community in Germany have not been rare also in more recent times. Most notably, anti-Semitic crimes and violence have been on the rise in the past years:  In 2018 only, the German police recorded over 1800 anti-Semitic crimes in the country, with an increase of about 20% from 2017. Almost 90% of these acts were attributed to extreme right-wing perpetrators and motives. Anti-Semitic violence rose from 37 (2017) to 62 (2018) incidents and the last year, in addition to 28 attacks on Jewish cemeteries and 21 attacks on synagogues. More generally, right-wing violence and terrorism have been surging in recent years in Germany, especially during the height of the so called “refugee crisis”. Explosive attacks, arson, terror plots and violent assaults predominantly targeting refugees, Muslims and pro-immigration politicians increased significantly between 2015 and 2017.

Germany also experienced a worrying diversification of perpetrators. More and more of the plotters and perpetrators had no previously known connection to the organized extreme right movement and were unknown to the police. This phenomenon, often referred to as “hive terrorism”, might be the result of a combination of significant refugee influx, the struggle of the legal system to label severe acts of extreme right-wing violence clearly as terrorism and a subcultural change (i.e. the decreased importance of extreme-right-wing political parties in favour of subcultural forms of mobilization). This could have lowered of the threshold for contact between ‘ordinary’ citizens and highly radicalized extremists. In addition, this development has encouraged ‘ordinary’ citizens to engage in severe acts of extreme-right-wing-motivated violence, by facilitating the transmission of grievances, opportunities, and polarization. These three factors were found crucial for increased levels of extreme-right-wing violence and terrorism by Ravndal in a 2017 study.

Another factor that needs to be understood is the influence of right-wing populist parties or rhetoric. Deliberately using anti-establishment campaigning paired with inflammatory or derogatory language directed at immigrants and the Jewish community, for example, can facilitate the lowering of thresholds for contact with the extreme right and of psychological barriers against using severe forms of violence.

But the Halle attack also presents some specificities compared to anti-Semitic crimes perpetrated in previous years, at least in Europe. For the first time, a synagogue filled with community members was attacked on broad daylight. For the first time, the perpetrator tried to forcefully enter the building to conduct a shooting and bombing massacre in person. The live streaming of the attack and the various comments in English and German by Stephan B., who appears to switch between languages, has never happened in German right-wing terrorism before. This behaviour might be directly influenced by the mode of operation of the attacks in Christchurch, New Zealand or Poway, United States. Similar to the perpetrators of these terror attacks, Stephan B. posted online a manifesto, written in English, which shows that he was more interested in reaching a global audience, than the German neo-Nazi milieu. He streamed the attack and explicitly hoped to gain admiration from his online audience. The Halle attack thus marks the arrival to Germany of a new “gamification” style of extreme right terrorism. Stephan B. seemingly had no intention of communicating his actions to the German neo-Nazi movement but rather to a global community, which he hoped would idolize him. Recently, right-wing terrorist groups like the “Old School Society” or “Revolution Chemnitz” have begun to use encrypted messenger services for coordination and radicalization of each other. But no one so far attempted an attack with live streaming on a global online stage.

On a tactical level, B. is the first known terrorist to use self-made weapons, including fully automatic submachine guns in an attack. He stated explicitly in his manifesto that he wanted to prove the viability of improvised weaponry. If the door of the Synagogue had not been specially secured, there would have been undoubtedly mass casualties. Ultimately, this might be one of the most significant aspects of the Halle events. A live-streamed attack by extreme-right terrorists like in Christchurch was, in fact, likely to happen in Germany. Yet, Stephan B. more or less failed to recreate a Christchurch scenario. While he did show that custom self-made weaponry can circumvent the strict gun control regulations that are in place in Europe, his gun jammed, which prevented the killing of at least one person and the access into the Synagogue. In this respect, professional weapons would have made his attack much more deadly, but to obtain them he would have run much higher risk of being detected by the authorities. In all likelihood, this trade-off will be recognized by many violent extremists and terrorists, not only among the extreme right. 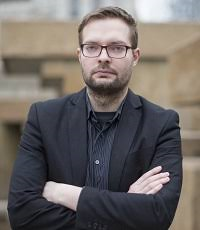 Daniel Koehler is the Founding Director of the German Institute on Radicalization and De-Radicalization Studies (GIRDS), and editor of the peer-reviewed open access Journal on Deradicalization (www.journal-derad.com). Daniel was named a Fellow of George Washington University’s Program on Extremism at the Center for Cyber and Homeland Security in 2015, and appointed as the first court expert on deradicalization in the United States of America at the District Court in Minneapolis in 2016.  In July 2017, he became a member of the Editorial Board of the International Centre for Counter-Terrorism in The Hague. His work focuses on right-wing terrorism, violent radicalization and deradicalization processes and programs.

By Daniel Koehler
E-mail this page