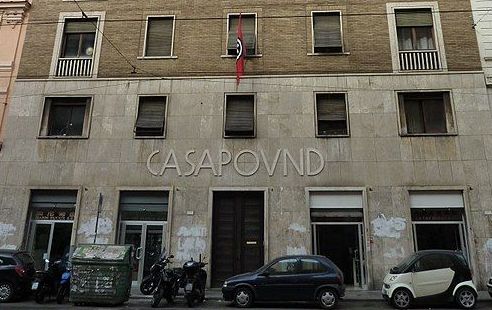 Fascism refers to a form of revolutionary radical nationalism, usually labeled “ultra-nationalism”, which aims for a “rebirth” of the nation.[1] It favors actions rather than detailed political programs, being characterized by glorification of violence and military virtues, mass mobilization, and charismatic leadership.[2] With regard to its economic program, fascism privileges an illiberal corporatist national economic structure, which its proponents believe represent a “third way” between capitalism and communism.[3] Despite some similarities like anti-liberalism and anti-egalitarianism, a fascist regime is distinct from traditional forms of right-wing dictatorship because it requires not only passive obedience from citizens, or at least the absence of opposition, but also active political engagement and trust in the fascist national project. As such, fascist regimes tend to be not only authoritarian, but also totalitarian, at least in aspiration.

The term “fascism” was first used to label the Italian movement led by Benito Mussolini in the interwar period. The concept comes from fasci, the original units of combats founded by Mussolini in 1919 – Fasci di combattimento. Fascio in Italian means a bundle of sticks or a guild. Moreover, the emblem fascio littorio became the most popular symbol for the fascist movement. In ancient Rome, lictors (bodyguards) marching beside magistrates carried this emblem symbolizing strength through unity.

In academia, fascism has been an object of study since the 1930s. However, what is known as “Fascist studies” emerged in the post-war period. The first issue of the Journal of Contemporary History in 1966 was devoted to the topic for instance.

Three schools of thought have been particularly relevant in academia to conceptualize fascism: 1) the national approach, 2) the historical approach, and 3) the generic approach. With regards to the first, some scholars see fascism as a unique and national phenomenon bounded by time and space. The Italian historian Renzo De Felice, with his in-depth studies of the Italian case, has been a pioneer in this respect.[4] This analysis focuses on the individual national “fascisms”, such as the Italian (Fascism with capital letter) or the German (Nazism). Wherever scholars look at several “fascisms”, such as the variants in Southern and Eastern Europe – the Spanish Falange, the Romanian Iron Guard, or the Hungarian Arrow Cross – they study them in a comparative perspective.

Secondly, other scholars claim that fascism is first and foremost a historical phenomenon that must be examined in light of its context. It is therefore conditioned by its original birthplace – Europe in the interwar period. Scholars display a pragmatic approach to fascism as a political phenomenon that was born out of very specific historical conditions: The war, the economic crises, the social and political turmoil. All these conditions in the 1920s and 1930s created a violent and militant mood, and a growing discontent and distrust of established political elites, which in turn paved the way for both radical and extreme political movements and parties.

Lastly, some scholars define fascism as a more generic political phenomenon beyond that of time (e.g. interwar period) and space (e.g. specific European countries). The Italian and German cases are still important references, but the concept can also be applied to other cases. Within this school of thought we find for example the Marxist interpretation, also called the agent theory, which dates back to the 1920s and see fascists as simple armed hands for capitalist interests.[5] The same approach, which does not take into account spatial or temporal national specifications, can also be found in the theory of fascism as the right-wing version of totalitarianism. Here, German Nazism and Italian fascism in the interwar period, on the one hand, and the Soviet Union under Stalin, on the other, are analyzed on the basis of fundamental similarities in attitudes, organizational forms, and political methods.[6]

Most scholars agree that fascism as a political movement came into being first in Italy in the early 20th century. Fascism was born with the phenomenon of squadrismo, which during the period from 1918-1921 was confined to Northern Italy and was not yet totally controlled by Benito Mussolini. The origins must be seen in the Italian paramilitary squads (vigilantes) in rural areas, led by local leaders who were engaged in violent counter-revolution repression against left-wing parties and syndicates. Benito Mussolini was in an early phase able to merge his Blackshirts with national syndicalists, anti-Marxist revolutionaries, and Futurists so that the Nationalist Fascist Party was born in 1921 under his leadership.

The extent to which fascism continued to exist as an organized political phenomenon after the Second World War depends on how it is conceptualized. If we look for temporal continuity with historical fascism, some would argue that only a few fascist movements survived the war, most notably the Italian Social Movement (MSI: Movimento Sociale Italiano, 1946-1995), New Swedish Movement (NSR: Nysvenska rörelsen), and German Socialist Nationalist Party (SRP: Sozialistische Reichspartei, 1949-52). However, if we look for groups with ideological and historical references to historical fascism, we can include parties and groups like CasaPound Italia (since 2008), and the Nordic Resistance Movement (NMR: Nordiska Motståndsrörelsen, since 2001) from Sweden. These organizations have defended the legitimacy of historical fascism and they openly refer to a fascist tradition from the interwar period.[7]

[1] Griffin, R. (1993) [1991]. The Nature of Fascism. London and New York: Routledge, 26. Fascism is defined as ‘a genus of political ideology whose mythic core in its various permutations is a palingenetic form of populist ultra-nationalism’.